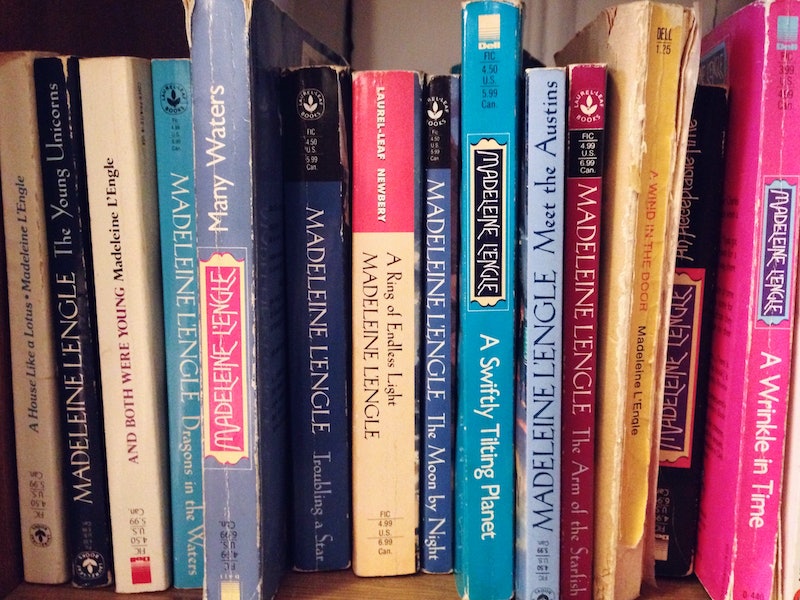 I'm not sure how old I was when I first read A Wrinkle in Time , Madeleine L'Engle's famous YA novel by in which Meg Murray, her new friend Calvin, and her clairvoyant baby brother Charles Wallace travel across the universe to rescue Meg and Charles Wallace's father, a physicist being held prisoner by a totalitarian society on a faraway planet. I might have been 8, or maybe I was 10 or 11. Whatever age I was, it was the exact right age to read Madeleine L'Engle.

My obsession L'Engle's work defined my preteen years. I've read almost all of her books, many of them several times. The Austin Family Chronicles series had the awesome benefit of being partially set my childhood neighborhood, on Manhattan's Upper West Side. L'Engle also lived in that part of the city, and when I walk into the Cathedral of St. John the Divine, where L'Engle had her office a mere block away from the apartment I grew up in, I still like to imagine her ghost scribbling away in a quiet room tucked somewhere behind the winding halls of its gothic interior.

YA is bigger than it's ever been, but I'm stunned and totally confused and honestly kind of incensed by the fact that L'Engle is routinely left out of our conversations about the genre. When we talk about female characters in childhood and YA lit, where are Meg Murray and Vicky Austin — two of the smartest, most individual, and most fully realized teenage girls ever put on paper? And when we argue for the ability of children's books to tackle big, complex topics, why oh why oh WHY doesn't anyone mention the magnificent A Ring of Endless Light ? L'Engle wrote during the mid-to-late 20th century, so maybe she's too dated? I hope not, because her grasp of the depth and totality of human experience, from the scientific to the spiritual to the sexual, still seems more sophisticated and modern than many other authors'. Including those who write for adults.

Looking back, I still see my L'Engle years as pivotal to my own growth as a reader. She was my first and biggest lesson about how reading can teach you about the greater world and about yourself, which is why books are such an indispensable part of life for many of us in the first place. Here are some big lessons that L'Engle taught her fans (and if you're not yet one of them, it's never to late to join the club):

There is Such a Thing As a Tesseract

The plot of A Wrinkle in Time hinges on the idea of a "tesseract," the four dimensions spacetime that can "wrinkle" to allow a person or object to travel instantaneously from one location in space to another. I associate this word so completely with L'Engle's work that I was stunned when I learned that it's an actual term for a real scientific concept.

In Wrinkle's sequel, A Wind in the Door , the big baddies try to kill Charles Wallace by destroying his mitochondria, which the "powerhouses" in human cells that create the energy we need to live. I'm pretty sure that the only two kids who went into 6th grade bio knowing this were myself and another L'Engle fan (who obviously one of my BFFs).

Religion Can Be Compatible With Science

I grew up in a completely secular Jewish household, and it's safe to say that my first in-depth exposure to complex religious themes came from L'Engle's books. L'Engle was a devout Episcopalian and Christian faith was a major part her work, particularly the Austin novels. But rather than find this alienating, L'Engle's intellectual and deeply humanistic approach to spirituality resonated with me, and I still credit her with helping me accept religion as an alternative way of seeing the world — even though it wasn't my way. I think this is in part because I was obsessed with science, and all of her books (which had a sci-fi bent) championed hard science as an integral part of religious inquiry.

Death Is a Part of Life, But That Doesn't Make It Easy to Deal With

A Ring of Endless Light centers on Vicky Austin's attempt to deal with the declining health of her beloved Grandfather, who is dying of cancer. Other deaths are all around her — a good friend's father, a little girl with epilepsy, a baby dolphin, a handsome suitor's suicide attempt. The book explores countless ways that people grapple with mortality, from belief in the afterlife to cryonics. Vicky doesn't find any easy answers, but she does find comfort by connecting to the people around her, and in the wonders of the world she lives in.

Sex Can Be a Form of Healing

In A Ring of Endless Light, Leo tells Vicky that after his grandfather died, his parents made love as part of their grieving process. In A House Like A Lotus Polly O'Keefe initiates a one-night-stand with a male friend after a traumatic incident, and has (what seems to be) her first orgasm. When I first read these books I was definitely too young to understand the emotions behind those scenes. But both of them have flashed into my head during my adult life, with a clarity that goes to show how much L'Engle's work influenced my earliest (and incidentally, some of my healthiest) ideas about what sex can bring to our lives.

There Are Forms of Intimacy at Least as Potent as Sex, and Some of Them Might Involve Telepathy

In a great essay about A Ring of Endless Light that ran on Jezebel a few years ago, Lizzie Skurnick wrote about the complex and often confusing varieties of intimacy Vicky has with three different boys at a pivotal point in her life. Only one of these boys is someone who Vicky is blatantly sexually attracted to, but she ultimately winds up feeling closer to the two boys with whom she shares the most raw emotional experiences. Leo weeps with Vicky on a beach, and an older student named Adam opens up her world by helping her discover that she can communicate telepathically with dolphins.

Vicky falls for Adam because he helps her tap in to parts of herself that were always there, but never before explored. In A Wind In the Door Meg realizes that the most "her" she has ever felt was while helping (her future husband) Calvin with math, her favorite subject. I've spent too much of the intervening years losing sight of this lesson, which makes it all the more breathtaking to find it contained so beautifully and plainly in the middle of "children's" books.

Or shallower audience, or less sophisticated audience, or any of the other ridiculous things that certain kinds of people say about books geared towards younger readers. L'Engle's ambitious, complex body of work speaks for this in itself, but the great lady also had some wise words on the subject:

You have to write the book that wants to be written. And if the book will be too difficult for grown-ups, then you write it for children.

More like this
The 'Firefly Lane' Book Ending Teases Way More Tears To Come In 2023
By K.W. Colyard
'Bridgerton' S3 Teases Exciting Social Season For Penelope Featherington
By Bustle
The 'Lady Chatterley's Lover' Book Leaves Us With A Troubling Question
By Catharina Cheung
Jodie Turner-Smith & Joshua Jackson's Relationship Timeline Includes Her Proposing
By Jake Viswanath
Get Even More From Bustle — Sign Up For The Newsletter