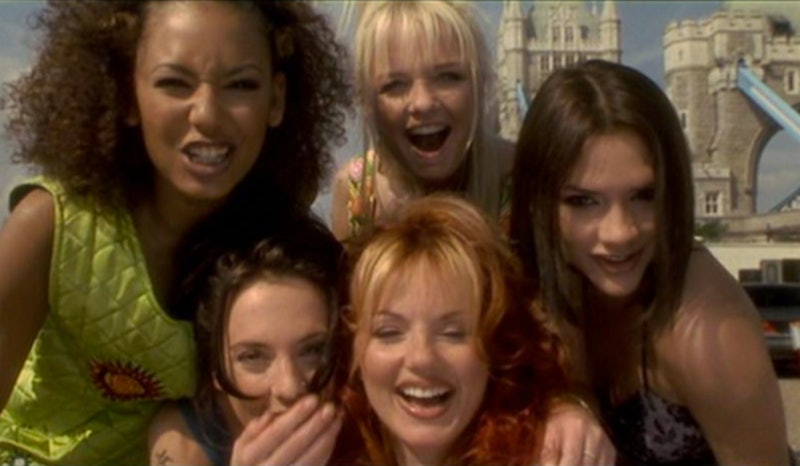 Any child of the '90s still has a dusty VHS of the masterpiece Spice World lying around somewhere, and it's a damn shame that it hasn't been broken out. You know that back in second grade you hung onto EVERY beautiful line delivered by the incomparable Spice Girls, doing an Oscar worthy performance playing themselves. In fact there were moments in this incredible film that probably made you love the Spice Girls even more, and you probably only faintly remember them!

Well, that's why I'm here. First, let's take a walk down memory lane and think back to which Spice Girl doll you played with the most. Was it Posh in her purple and black lace mini? Or Scary in her zebra print platform boots? Whichever it was, undoubtedly there was a time when these characters helped formed your personality, and Spice World really took their character traits to the edge of humorous exaggeration. It literally got to the point where they were dressed up as each other.

So without further delay, here's a sampling of some key moments in this modern classic that truly defined your favorite Spice Girl's personality... and made you love them just a little bit more.

While that scene is an iconic moment in modern cinema, there's some other key moments with Posh's stylistic flair took precedent. Who can forget that adrenaline packed scene when the girls fall overboard and Posh laments that her dress was dry clean only, or when she goes to boot camp in a micro-mini and stilettos. Posh was as dedicated to her look as she was utterly joyless, and we loved her for it.

Whenever Baby played on her swing set while plotting world domination.

Throughout the film Baby is doing one of two things: sucking on a lollipop, and swinging on her swing the tour bus. Sometimes both. And not only was it precious, it was almost an all-consuming about of precious. We know Baby is cute, but will she use that power for good or for evil?

There's a cut scene about Baby being so cute she could get away with murder, in which she simply dimples a homicide away. It's in that moment that any Baby Spice fanatic realized that she wasn't just a cute face, her girlish persona was simply a mask used to gain power. I mean, that's why she was my favorite, anyway.

Scary Spice was primarily defined by her fierce love of leopard print and next-level hairstyles, the kind of innovation that made Baby's pigtails or Ginger's yellow bangs look like amateur hour. This was not a women who would play by the rules. That becomes evident when she's playing a rousing game of chess with Ginger and decides to usurp the redhead's check by moving a fairground horse in her way. Despite Ginger insisting that you can't DO that (Mr. Chess says so!) Scary announces, "Well, I'm gonna break the rules and set this little fairground horse free amongst all these little square fields, like that."

If you were a wildly disobedient child, it was undoubtedly a pivotal moment in your youth, helping to shape your adolescent rebellion. It's the essence of why the Spice who marched to the beat of her own drum was your inspiration.

Whenever Ginger vouched for strength, courage, and a Wonderbra.

Ginger's persona was a bit harder to figure out than the other girls, perhaps because she was named for a hair color and not a vague personality trait, but in retrospect I find who to be the most feminist-leaning with a playful, cheeky sexuality. She always put her best cleavage forward and pushed girl power while insisting in her own sarcastic way that of COURSE she loves men.

It was a moment that solidified Ginger as a charming (if not frivolous) feminist who lived life with her head held high and her boobs held higher. That, and kissing an alien.

Whenever Sporty was... there.

...yeah, honestly Sporty didn't really have a defining moment in Spice World, which is probably okay since Sporty fans were the most ambivalent Spice Girls fans in your recess group.