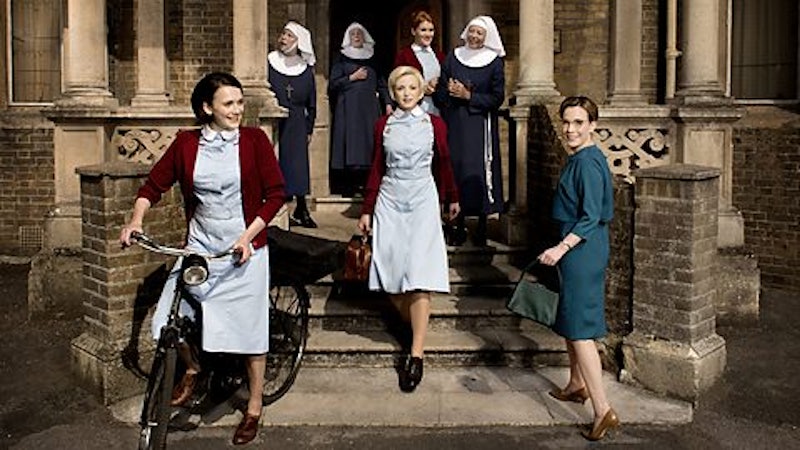 Sunday night is crazy busy for TV fans. Between Game of Thrones, Mad Men, and The Good Wife, there is hardly a moment to spare. There is one more show you should be watching, though: Call the Midwife . Season 4 of the PBS/BBC co-production is currently airing Sundays at 8PM ET/PT on PBS (and the previous seasons are on Netflix, so there are no excuses for not catching up).

Call the Midwife hasn't made as big a splash across the pond as its fellow import Downton Abbey has, but in all the ways that count Call the Midwife is a much more important show. Set in the late '50s and early '60s, the show is a loose adaptation of the memoir Call the Midwife: A Memoir of Birth, Joy, and Hard Times . While the first three seasons were centered on Jessica Raine's Jenny, Raine departed at the end of season 3 leaving the nuns and midwives who live in the convent Nonnatus House to share top billing. Jenny was a terrific character, but her departure did nothing to change what makes the show so important: its unflinching depictions of feminism and controversial social issues.

Call the Midwife stays true to its time period, while still tackling issues that remain relevant today. The nuns and midwives live and work in London's impoverished East End. Over the course of four seasons they have encountered neglected children (who did not get a happy ending), women who were ostracized for working, elderly people forced out of their already decrepit homes, abortion, a nun giving up the cloth to marry, a young midwife deciding to devote her life to God, and much, much more.

Call the Midwife is one of the few shows on television to boast a cast that is almost completely female. Sadly, there is no racial diversity, but Call the Midwife does an excellent job of giving women of all ages a voice. In fact, its most interesting characters are Sister Monica Joan (Judy Parfitt), a brilliantly philosophical nun stricken with Alzheimer's Disease, and the stubborn, WWII nurse turned nun Sister Evangelina (Pam Ferris). Both characters are well over the age of 50, but their lives, losses, and loves are treated with the same respect as those of the young midwives they teach.

What I find most remarkable is Call the Midwife is a show about women of faith and young women who have chosen work over marriage (and in some cases in addition to marriage) living together. While it seems these two groups should be from different worlds, they compliment each other by offering differing viewpoints. Nonnatus House is a safe place where all the women's voices are heard and encouraged.

A great example of the show's ability to tackle social issues from multiple viewpoints came in the most recent episode when a pregnant woman's husband was arrested for flirting with an undercover cop at a gentleman's club. The man was arrested because he was gay, and the reaction from his community was heartbreaking. At Nonnatus House, the midwives and nuns' opinions were diverse. Most of the characters took the "judge not, lest ye be judged" stance, but some agreed the man had committed a crime. The always forward-thinking Trixie (Helen George) revealed she had willingly pretended to be a young doctor's girlfriend so he would not be kicked out of medical school, while Patsy (Emerald Fennell), a closeted lesbian for her own safety, kept mum on the subject for as long as she could before coming to both the wife and husband's defense.

Some of the show's best characters reacted to the situation in ways that are appalling to our modern eyes, but authentic to the time period. Call the Midwife has a knack for tackling issues from all sides by showing the prejudice right along with the more progressive ways of thinking that were beginning to creep into the social conscious of those living in the turbulent era. Perhaps the most progressive moment the series ever gave us came in last season's outing that tackled the issue of abortion.

Terminating a pregnancy in the '50s was not only taboo, it was illegal. When a poor mother with more mouths than she could feed as it was attempted and botched an at home abortion after being denied medical help, Call the Midwife produced its finest hour. No one at Nonnatus House shunned the woman, even though for many of them their religion stopped short of allowing them to support her actions, but it did not stop them for caring for her. The episode ended with the woman happy with her decision to terminate the pregnancy even though it left her infertile— it was an interesting and unexpected way to present the issue of abortion. In modern storytelling the issue is often seen through the eyes of young women, not poor mothers who do not have access to birth control.

Call the Midwife always takes the road no one else wants to travel. It shows poverty on a week to week basis, but still finds time for joy. It lets women work alongside other women, caring for and supporting one another through every stage of their lives. Maybe there is an element of fantasy to the show's progressiveness, but it is a fantasy that never involves not asking the hard questions. It is not glamorous — birth, life, and death are a messy business after all, but Call the Midwife is an important show. It is possibly the most important show on television today, and if you are not watching, you are missing out on something special.

More like this
Adele’s All-Female Lineup Includes Kacey Musgraves, Mahalia, & Self Esteem
By Shahed Ezaydi
'Stranger Things' Cast Thinks It's "OK Not To Label" Will Byers' Sexuality
By Alyssa Lapid
Here's Where Your Favorite Characters Stand After The 'Stranger Things' 4 Finale
By Grace Wehniainen
The Stranger Things 4 Soundtrack Spans Classic Eras & Styles
By Brad Witter
Get Even More From Bustle — Sign Up For The Newsletter