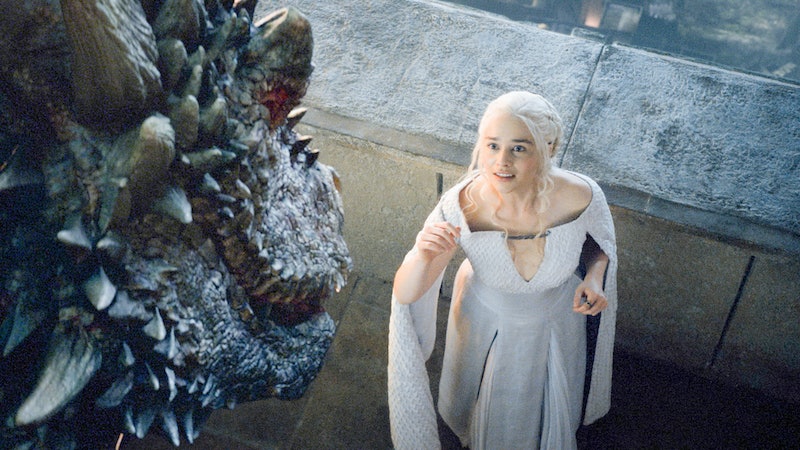 I believe it was a wise woman who once said, "I'm not here to make friends." OK, it was a lot of women, and they were all on The Bachelor, but that doesn't mean there's not a nugget of wisdom in there: It's a phrase for a woman who's not interested in being likeable, delicate, or cordial. She's interested in one thing, and that's getting stuff done. The women of Game of Thrones have often fallen into that category — there's a reason we all love Dany despite a lack of significant story over the past few seasons and hell, Cersei commands a room every time she hold a glass of wine. But in the second episode of Game of Thrones Season 5, "House of Black and White," our fearless ladies' ambition came with an extra helping of DGAF and it was glorious.

First and foremost is obviously Game of Thrones darling Daenerys, who surprised and outraged the people of Meereen when she ordered the execution of a man who murdered the member of the Sons of the Harpy whom Dany was keeping for questioning. Dany insisted that this prisoner have a fair trial before simply executing him — a decision she felt was a strong choice as a leader with the threat of an unknown force barrelling her way. Her subject defied her, however, and murdered the Harpy prisoner, leading Dany to take swift and violent action against the rule-breaker. But from the moment she brought this man before the people who once saw her as their Mhysa, it was clear to Dany that these people were just as willing to turn on her when they didn't get their way. Despite having freed them, Dany does not actually have any power over these people. Still, she gave the command and the moment Daario slung his blade at the traitor's neck, it became abundantly clear that she'd severed her connection to her people as well. The people of Meereen revolted and threw stones at her, jumping from clamoring for her favor one minute, to wishing her dead the next.

And it's slightly understandable, because to some extent, this is not the Dany we signed up for either. We met the Mother of Dragons, freer of slaves. She was a compassionate woman who'd literally emerged from the ashes of her former life to start on this journey and who just wanted the best for the people she affected in this world. But that's not really who Dany is. And if she wants to sit on the Iron Throne, as she says she does, that's not who Dany can continue to be. The kind of leadership it would take for Dany to take Kings Landing back is ruthless leadership. She must be calculating and smart and, at times, cruel. She cannot always be likeable, being raised on shoulders and bathing in the affectionate cooing of her subjects.

Though she did not, as a Stark would, kill the man she condemned to death, with that swift swipe, Dany cemented herself as a ruthless leader, just as capable of playing the game of thrones as any of the other players. She's not here to don gorgeous gowns and be loved by the masses: She's here to take back her family's birth right, by any means necessary.

But elsewhere in Westeros, anti-heroines were everywhere. We've got our OG anti-heroine Cersei gripping the last bit of power that she can before Tommen marries Margaery Tyrell. Cersei, knowing full well that a woman cannot be the Hand of the King, simply does it anyway by simply speaking for her son as a sort of proxy. Of course, the powerful men of Kings Landing know what she's doing — one even throws an insult at her, calling her the Queen Mother and emphasizing that the title means absolutely nothing. That man may have been smart enough to see what game Cersei was playing, but he's not too smart, because Cersei has a plan and I'd put my money on it not ending well for anyone who's crossed her.

On the road, Sansa Stark has found her inner queen, but not in the petty way she once used her power to make fun of and complain about Arya. Instead, Sansa seems to have found her voice and her ability to use her own judgement rather than the judgement of others. When Brienne comes to her in a tavern and swears that she'll protect as she promised Catelyn Stark, Sansa firmly turns down the offer — not because Petyr Baelish told her to (though he certainly tried) — but because as a victim of the Lannisters' wrath, Sansa is extremely sensitive to those who've aligned with them. Much like Arya, she has not forgotten who showed favor to the Lannisters, and promise to Catelyn or not, Brienne did find herself pledging allegiance to the murderous family. Brienne may be one of my personal favorites, but I have to applaud Sansa for finding her inner #bossbitch.

Finally, we've also got Ellaria Sand joining the fray, and of all the women in this mixture, she might be the most devious in the bunch. Now that Oberyn has been killed — murdered, if you ask her — Ellaria is a mission and as she tells Oberyn's brother Doran, she's got the deadly Sand Snakes (Oberyn's deadly bastard daughters) on her side. Doran doesn't see Oberyn's death as a murder because it happened in legal combat, but Ellaria's already got a plan for revenge: She wants to send Myrcella Baratheon (Jaime and Cersei's biological daughter, and princess from King's Landing) back to Cersei body part by body part. Luckily, Doran says he's not about "mutilating little girls," but there's something really great about this scene.

In an episode in which all of our favorite women are taking the unpopular route, shirking their likeability and decorum to get things done as they need to be done, Ellaria serves as the cherry on top: The woman so bad, so dark, that she's ready to torture a young, golden-haired princess in a pink gown. As Ellaria talks about her plan, Myrcella is waltzing through the gardens with her prince, looking every bit the part of every princess tale in every storybook ever. And in storms Ellaria, raging about blood and torture.

"House of Black and White" is, in a nutshell, what's so great about Game of Thrones: It's just about women being powerful. It's not just about ugly truths and extreme violence. It's about women being powerful at absolutely any cost, and being the keepers of those ugly truths and extreme violence, in a world where that's completely unexpected. And that's pretty badass, if you ask me.