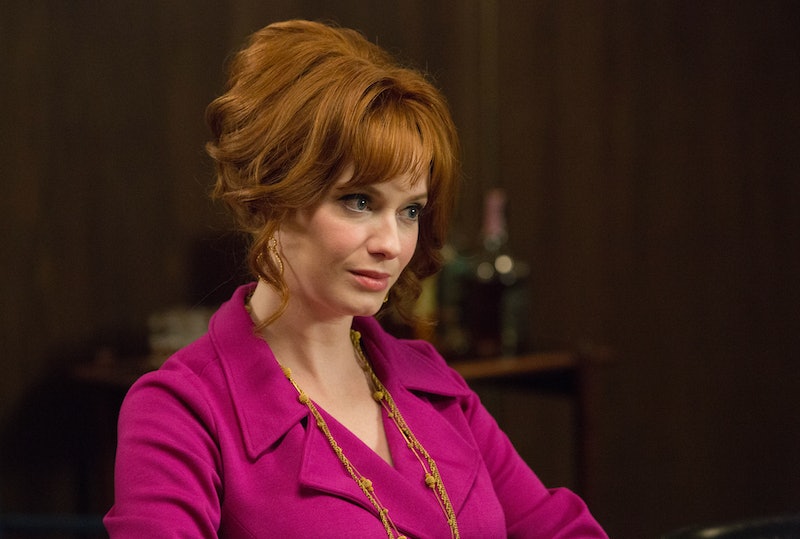 Mad Men is into the home stretch, so rather than setting up new storylines, it's time to wrap some up. "The Forecast" brings Joan to California on business, but instead she finds pleasure with a mysterious boyfriend Richard, played by Bruce Greenwood. If there's one thing we want at the end of Mad Men, it's for all the characters to have somewhat happy endings, right? Could Richard be Joan's "great love," the love she was never able to find with Roger, Greg, and especially Bob Benson? In the beginning, it seems likely. Then not so likely. Every time someone from Sterling Cooper and Partners winds up in California, it suddenly becomes their new "paradise." After a chance meeting at the office with this Richard, he and Joan go out to dinner. One thing clearly leads to another, and they wind up in bed the next morning. Richard admits to Joan that he's divorced, and stayed in his marriage for 22 years because of the kids. Joan doesn't offer up much information about her own home life, but clearly she's into Richard. She calls it all "paradise." Joan even gives him her real office number, and he rings her when he shows up in NYC. Joan's always had an internal struggle with trying to juggle everything. She wants more power at Sterling Cooper and Partners, but she also wants to be a mom to Kevin. Now, with Mad Men in the '70s, it feels like Joan's found that perfect balance and can do both. But does she want one more than the other? It's hard to tell. I just want Joan to have it all. Unfortunately, it doesn't look like she's going to have it all with Richard. Richard is divorced, with adult kids, and now he's retired. His only plan is "no plans" from here on out, and while out at dinner with Joan, he learns about her 4 year old at home. He immediately asks for the check, which is totally a little foreshadowing of what's to come. As he bluntly tells her back at his hotel room, she's got a little one, and clearly can't travel the world like he wants to do (WHOA, Richard, pretty sure little Kevin would LOVE to see the world, OK?). Now we find Joan more conflicted than ever before.

It all comes to a head when Richard shows up at Sterling Cooper and Partners (with flowers, naturally) to apologize to Joan. He likes her enough to throw away his grand retirement plans — even after knowing every aspect of Joan's life. You know what? Richard just might be our guy. If he makes Joan happy, he makes me happy, too.