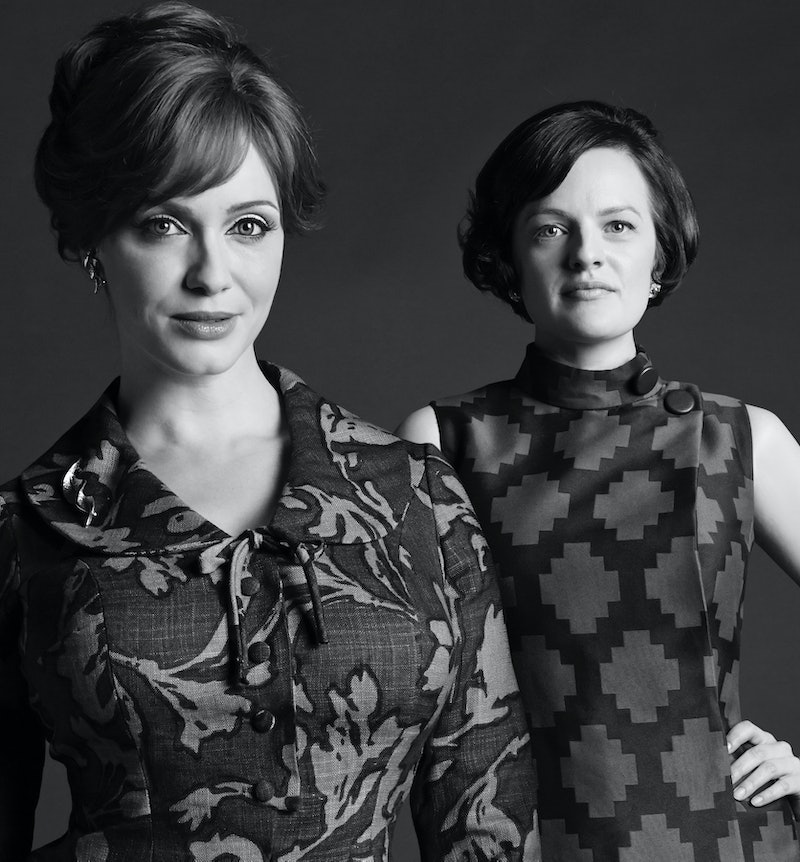 Who says it has to be a man’s world? Because these two Mad Men ladies are here to prove that theory wrong. Mad Men's Peggy Olson and Joan Harris have made great strides since their secretarial days at Sterling Cooper. Now Peggy pretty much runs the creative department, while Joan is an actual partner with her very own stake in the company. And while this climb up the male-dominated corporate ladder has proven to be pretty successful, why stop there? I believe Matthew Weiner has much bigger plans in store for these two powerhouse women, which will culminate in Peggy and Joan becoming the next Don and Roger.

What do I mean exactly? I’m predicting Mad Men ’s series finale will end with Peggy and Joan leaving the now-called Sterling Cooper & Partners and venturing out to form their very own ad agency, further proving they don’t need a man in order to stand on their own two feet. I mean, how awesome would that be? And if you think about it, the partnership is kind of perfect. Peggy and Joan have never been that close, but they’ve developed a mutual respect and admiration for each other throughout the years, seeing their own desire for independence reflected in one another’s eyes. And without the worry of maintaining a close friendship, they’d be able to voice their true business opinions and give constructive criticism to each other, which would hopefully make their company thrive all the more. Plus, doesn’t Olson & Harris have a nice ring to it?

Of course, just like with any start-up company, it would come with a lot of risks since it would be their money they'd be putting on the line. So what exactly would motivate Peggy and Joan to leave the security of their current jobs and branch out into unknown territory? I have a few ideas…

Many fans, including yours truly, believe that Mad Men will kill off Don Draper by series end. If that does, indeed, end up happening, it could give Peggy the chance to become the new Don — which, let’s face it, is definitely where this has all been heading. Don has been Peggy’s mentor since her very first day on the job. She has always looked to him for inspiration and guidance, even now that she’s technically his boss. But if Don's gone, that may give Peggy the extra little push she needs to truly succeed him and carry on his creativity through her own career ambitions. It would almost be her way of making his memory live on, which is exactly the kind of thing Don would want for his protégé.

Ted’s permanent return to the New York office would definitely be a huge incentive for Peggy to leave. Not wanting to get roped into having an affair (again) with a married man, Peggy could do what she normally does and confide her fears to Joan. Before they know it, one thing leads to another and they start secretly plotting an exit strategy so they can start their own agency. I'm sure a few loyal colleagues would be more than happy to come join them. For example, Stan clearly supports Peggy in an authoritative role, I'm sure he'd be willing to follow her pretty much anywhere.

Joan has never received the appreciation she so rightfully deserves. Men look at her and only see what’s on the outside — completely ignoring the genuine skills she has for this job, even after she became a partner. Granted, she ended up having to use her feminine whiles to make that happen, but she’s since proven to be quite an asset to the agency, successfully maintaining clients like Butler Footwear and Avon and becoming an expert on how the business side of the company is run. And yet her opinion still doesn't seem carry much weight around the office. That would all change if she were to embark on a new company with Peggy. Running the accounts, bringing in new clients — she could do whatever she wanted (just like Roger) and have those silly boys rue the days they took her for granted.

These are two extremely driven, career-focused women. They don’t need a reason to pursue what would make them happy. Would you ask a man why he put himself up for that promotion? No, because it’s just assumed that he wants to advance his career. So do these ladies. They don’t need a colleague’s death or the return of an ex to motivate them to stick it to the man and follow their dreams. Peggy and Joan are completely capable of doing that all on their own.

I am woman. Hear me roar.

More like this
UK Viewers Will Have To Wait To Watch The Handmaid’s Tale S5
By Maxine Harrison
Twitter Is Saying The Same Thing About Roger Federer’s Retirement From Tennis
By El Hunt
Nicola Coughlan Shared A Lady Whistledown Excerpt From ‘Bridgerton’ Season 3
By Grace Wehniainen, Alyssa Lapid and Sam Ramsden
Everything To Know About 'The Last Of Us' TV Adaptation
By Sophie McEvoy and Radhika Menon
Get Even More From Bustle — Sign Up For The Newsletter