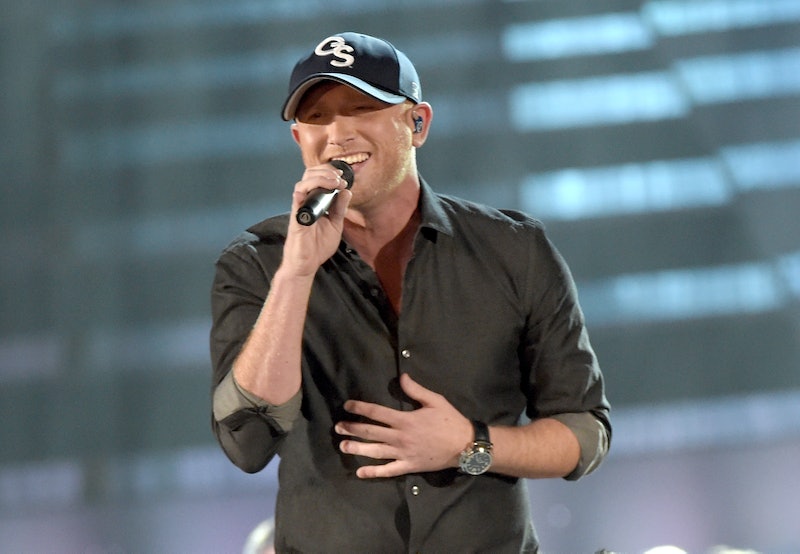 Today's country music scene was already jam-packed with male crooners who are just as handsome as they are talented, and now we can add another member to that group. At Sunday night's 2015 Academy of Country Music Awards, newcomer Cole Swindell was the proud recipient of the New Artist of the Year Award. I had not been too familiar with Swindell before, but upon seeing him take the stage with dimples as enchanting as his grace and humility, I'm ready to become much more acquainted. Swindell's smash hit is a little tune called "Ain't Worth The Whiskey," which is infectiously catchy and also sends a great message — if that guy or girl you were dating failed to recognize the fabulousness that is you, it was never meant to be. It's better to be single than with someone who doesn't appreciate you.

Oh, speaking of being single, my research (and shrewd attention to Swindell's ring finger while he was on stage) tells me that he isn't married! He can officially be my future husband #winning. In 2014, Swindell told Country Vibe that — although many of his songs "speak to the girls" — he is most often single, and doesn't have too much relationship experience. I have plenty of relationship experience, but being that most of those relationships tend to have a one-month expiration date (sometimes I hit the two-month mark), I think Swindell and I might be made for each other. “I just want to be known as a good guy, so obviously if I’m in a relationship I would work toward that to get better," Swindell also said.

So, this is a man who is infinitely talented, humble, and he knows how to take his time? I don't think he'll be single for very long.