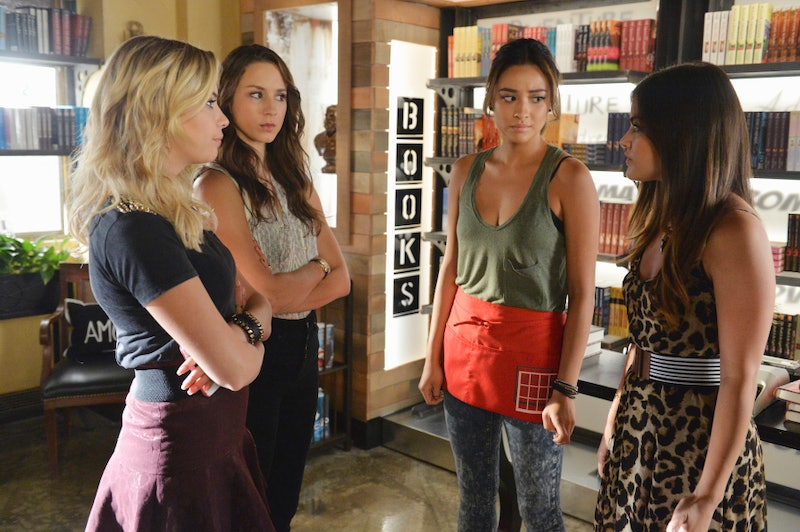 One of the most amazing things about Pretty Little Liars is its ability to attract such a diverse audience. It’s technically a show that’s made for teens, but everyone from my mother to my younger sister and her friends (who are in their early twenties) watch it — that’s a range that’s pretty much unparalleled by any other show on cable. The best part of this group of varied viewers is the plethora of crazy Pretty Little Liars theories that pop up: With so many different viewpoints, the chatter around the show can take on very many different forms. From Tumblr to Twitter, Pretty Little Liars fans are super serious about their theories, y’all, including a new theory that suggests that Emily & Hanna aren't real people.

Filed under “people you didn’t think would watch Pretty Little Liars” is the duo of Benjamin Light and Marco Sparks, the men behind the popular Doctor Who podcast Time Travel Murder Mystery, and, as of late, the Bros Watch PLL Too podcast. This one is especially fun to listen to, because these guys had to start at the waaaay beginning to get a hold on the PLL foundations before they could begin their musings. They’re all worth listening to if you have time — and besides, what else are you doing during your commute?

Anyway, Light and Sparks talk a lot about “The Theory” on their podcast, and here it is. “The Theory” goes that Emily and Hanna are not real people, but simply hallucinations from Spencer and Aria, respectively. Aria and Spencer are real and completely insane: Spencer is the killer of the group, and Aria is A. And while it's crazy, it's not all that crazy.

Aria and Hanna are both very similar: Their family structures are constantly thrown off-kilter, they have weird tastes in fashion, etc. Spencer and Emily are both tall, athletic, and intelligent, and they both have had relationships of some sort with Toby. According to Light and Sparks, Spencer and Aria only seem to team up on “let’s-find-out-who-A-is” excursions when something is at stake: Otherwise, the girls are usually teamed up with their imaged counterpart.

Totally cool and totally weird, right? This all gets a bit dodgy as more characters are introduced, but it absolutely makes sense. What if Aria and Spencer are both in Radley and frenemies within its walls? So much of Pretty Little Liars is bananas bonkers that it could only be imagined by someone with an inventive, disturbing imagination and a personality disorder.

Spencer has been fingered for murder during the course of the show, and she has been addicted to Adderall. What if the pills weren’t speed, like we were told, but some sort of anti-psychotic? Maybe Spencer is only her normal self (read: crazy) when she’s on the pills, and all of the time spent not taking her medication (which is probably a no-no in a psychiatric facility) is her brain going into hyper drive? If any of the girls has the propensity to kill someone and walk away, it’s Spencer. Emily has also killed someone: Lyndon/Nate, Maya’s stalker, got a stomach full of steel blade when Emily was finished with him.

As for Aria being A, there have been rumors of that since the show began and this theory only strengthens them. Aria has dated her teacher — who is too old for her and (oh yeah, duh) her teacher — and then trashed him just to get into college, among other things, so she's got a pretty loose moral compass. Orchestrating all of the crazy stunts that A performs wouldn’t ruffle her feathers (or feather earrings) in the least. Hanna is also a compulsive shoplifter, which is an act that wouldn’t necessarily make her a candidate for sainthood. Both Hanna and Aria act like good people but really aren’t: They’re always scheming, whether it’s against their future stepsisters or their father’s mistresses (the family structures are interesting here, too).

It’s worth noting that Light and Sparks are very clear that they don’t think that the series will necessarily end in the way of “The Theory.” Does it hold up in the advancing seasons of Pretty Little Liars? Does it matter? The way I see it, it’s a really cool lens from which Pretty Little Liars fans can watch (or rewatch) their favorite show.

More like this
Every Horror Movie Reference In The 'PLL: Original Sin' Premiere
By Alyssa Lapid
The 'PLL: Original Sin' Creators Say A’s Identity Will Be “Very Clear” By The Season Finale
By Alyssa Lapid
'Yellowjackets' Just Announced Who’s Playing Adult Van & It’s Perfect
By Gretchen Smail
At 14, D'Arcy Carden Was Sneaking Out To Parties & Crying Over Kurt Cobain
By Ivana Rihter
Get Even More From Bustle — Sign Up For The Newsletter