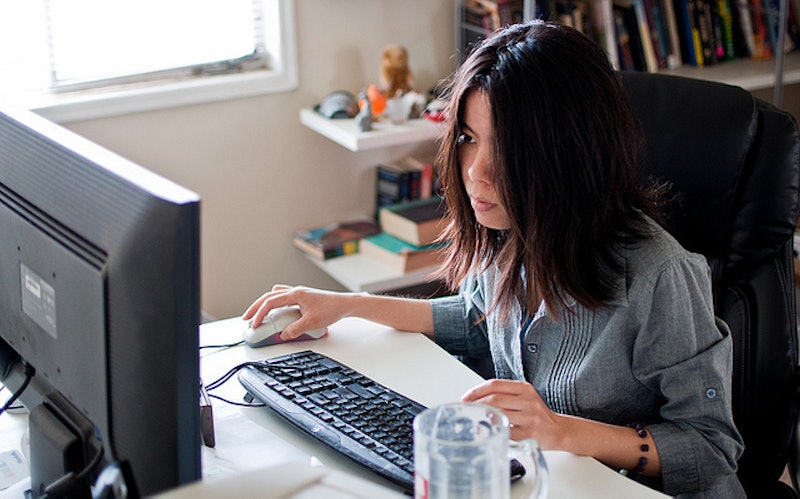 By now, I'm assuming you've tried OkCupid. I know several couples who met their now-husbands and wives on it, so no matter how many "questionable" people there seem to be on the site, I swear—with some discerning and good, old-fashioned faith—keep trying. Once you get the hang of what to say in a first OkCupid message, it can be amazing. Some people prefer Tinder or Match.com, but many go to back to OkCupid like they do an old tee-shirt they should give away—it's comfortable. Free. And they have hope (if even a sliver). You may remember a male Reddit user who decided to log into a dating site as a female, using most of his traits as his profile content, and a female friend's picture. He thought women had it easier on dating sites—until he actually tried it.

No matter if you're male or female, online dating isn't easy for anyone. A Second City comedy show, #Date Me: An OKCupid Experiment, even took dating on the site to a whole new level when the writers created 38 fake profiles to attract real users and see what happened. I saw the show the other night and the results made for a hilarious night. In it, the actors magnified people's messages on-screen and played out scenarios of those characters in "real" life. If you can't make it to the show, currently playing in Chicago, just check your OkCupid in-box and you're bound to see similar content and "characters."

Below, we asked Bustle readers—women and men alike—to share their most common OkC messages. I'm sure we can all relate.

(BTW, don't you love when OkC suggests that you "write them a lovely message"? No thank you!)

3. The one who tries to flatter you.

4. The one who tries to flatter you?

5. The one who comes bearing gifts (and money).

6. The person who is spontaneous and perhaps a tad overeager?

7. The novelist, the one who tells you everything and has mastered the cut-and-paste feature. Note the part where she says, "I can go on and on."

8. The OkC dater who uses (gross) analogies and jokes, and mistakes OkCupid for 20 Questions! (If we even manage to read them among his poor English, typos, and spelling errors!)

11. The one who just wants sex (Note: we received way too many images to post them all).

13. The (clever) nice guy or girl! Yes, they exist! But you often have to pore through all of the above first!