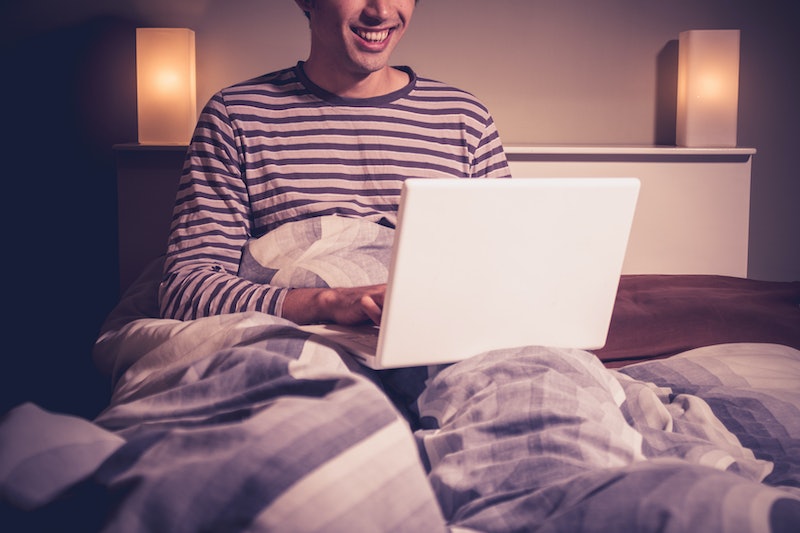 What happens when a dude pretends to be a woman on OkCupid? He quickly learns how insufferable online dating can be for women. "I figured I would get some weird messages here and there," writes Reddit user and armchair social psychologist OKCThrowaway22221. "But what I got was an onslaught of people who were, within minutes of saying hello, saying things that made me as a dude who spends most of his time on 4chan uneasy."

His experiment (which he details on Reddit) started as a way to prove to a female friend how much easier women have it on online dating sites. In my experience, this is a common sentiment among men (based on the same false underlying premise that fuels jealous statements about women being able to "have sex whenever they want"). OKCThrowaway22221 created a fake OkCupid profile, using mostly real facts ("a gender-swapped version of me") and a photo of his female friend (who "would be the first to say she's a pretty average looking girl"). Before even finishing his profile he received a friendly message, which he took as a sign of being right that women have it easy. But then...

I finished setting up my profile ... I thought I would check on it in about 24 hours. But before I could even close the tab another message was received. It was another guy who seemed nice asking how I was doing and I messaged him back staying as neutral and as uninterested as possible without being mean. I was about to leave again, but I was kind of curious now, so I waited another minute, and sure enough, a third message popped up ... I messaged him back, but before I could send, I had gotten a reply from the first guy, so I had to do that, then a reply from the second guy. So fine, people are interested in going out with me. Then I got another message that opened with a line that while not wholly vulgar, kind of came off a little strange. I ignored it and went back to send the message to person three now.

Before I could send it, I got a followup message from Mr.4 which was needlessly sexual in nature. I continued to ignore him and finished. I then began to have some small-talk with some guys (remember this is like minute 20 of having the profile up) and all of the conversations kind of get weird. One of the guys becomes super aggressive saying he is competitive and he will treat me right, the other is asking for my phone number telling me he is lying in bed and the conversation (without me steering it) is turning increasingly sexual in nature though I tell him I'm not comfortable with it. Then I got the NoStringsAtttached messages, with multiple guys sending me messages asking me to watch them cam, or meeting up with them within the hour, or talk with them on the phone or cyber. I would say no and they usually didn't take it too well.

At first, OKCThrowaway22221 thought it was kind of fun and interesting. The he started getting irritated. Men were hounding for naked photos. Some would send a first message and then another in quick succession, demanding to know why "she" hadn't responded yet. Seemingly normal and non-sexual conversations would turn dirty or perverse suddenly. Some men became hostile when OKCThrowaway22221 wasn't interested in casual sex or wouldn't meet them that day.

So...yep. Sounds like being a woman on OkCupid. I've personally attempted to use OkCupid several times in life, and this is how it goes every time: Fill out (or update) my profile, add a picture, decide I've done enough for the time being, and sign out. Come back later to bunches of semi-literate, vulgar, or just plain boring messages from would-be suitors. Feel discouraged and overwhelmed — who has the energy for all this? — and give up. Clearly, online dating isn't for impatient people with ADHD who value good grammar.

And it wasn't for our OkCupid experimenter, either — though he did oh-so-adorably learn his lesson. "I would be lying if I said it didn't get to me," he writes. "I thought it would be some fun thing ... but within a 2 hour span it got me really down and I was feeling really uncomfortable with everything ... I came away thinking women have it so much harder than guys do when it comes to that kind of stuff."

Um, can this be a mandatory exercise for all male OkCupid users, please? [At least go read the comments on OKCThrowaway22221's Reddit post, guys. Lots of stories that might be enlightening, like the one below.]

More like this
Are Gemini & Scorpio Compatible In A Relationship?
By Kristine Fellizar
The Most Compatible Life Path Numbers, According To Numerologists
By Kristine Fellizar
The Case For A Hard Launch Summer
By Morgan Sullivan
What Is "The Ick?" The TikTok Dating Term, Explained
By Courtney Young
Get Even More From Bustle — Sign Up For The Newsletter