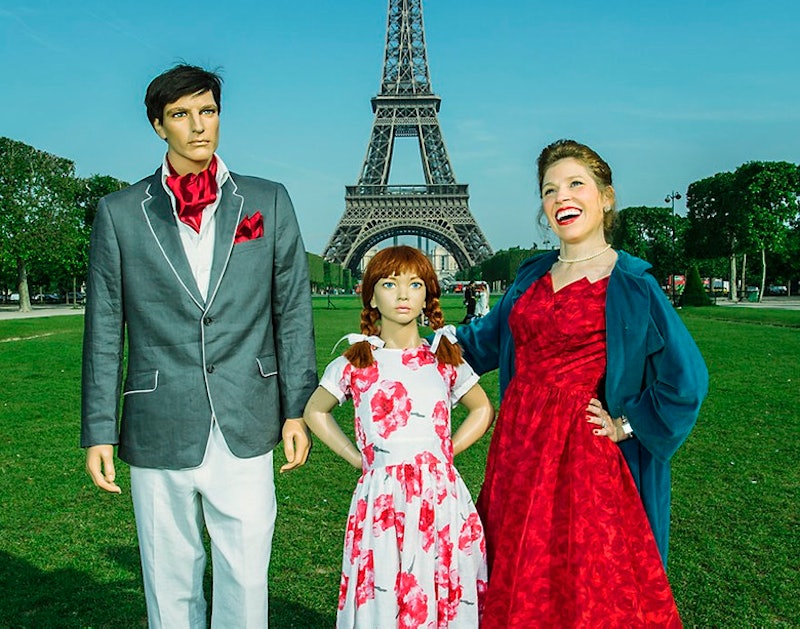 Fourteen years ago, conceptual photographer Suzanne Heintz was sick and tired of people asking her when she getting get married, and of the unspoken implication that there must be something wrong with a woman who remains single past a certain point in her life. On her website, Heintz recalls the moment that finally made her take action:

Even my Mother must have thought she was setting me straight when she said, “Suzy, there’s nobody perfect out there. You just need to PICK somebody, if you’re going to settle down.” I snapped back, “Mom! It’s not like I can go out and BUY a family! I can’t just MAKE it happen!” But then, I found a way. I bought a beautiful Family… of Mannequins.

For over a decade, Heintz has photographed her mannequin family, in situations ranging from the everyday, to holiday celebrations, to a family vacation in Paris. The images of Heintz with her “husband” Chauncey and “daughter” Mary Margaret are both hilarious and thought provoking, highlighting the artificiality that lies at the heart of cultural demands that women be “perfect” wives and mothers. In an essay for BoredPanda, Heintz explains her thinking behind the project,

While I’ve used myself as a subject, this really isn’t about me at all. It’s about what is expected of all women. How do we now define ourselves, instead of letting tradition do it for us? If you’re really smart, you can see how this isn’t just about women either. It’s about judgement, both of ourselves and each other.

The performance art project follows Heintz's "family" through many stages of life, from the exciting early days of courtship and marriage to the malaise of the everyday.

Photos in the series commemorate family-centric holidays, including a festive trip to the hospital:

The happy family has even vacationed in Paris:

In a dramatic turn of events, Heintz ended up leaving her mannequin husband in Paris (he was too expensive to ship home). She thought she might be done with the project, but after six months decided to jump start it again—beginning with a vow renewal, naturally:

On her blog, Heintz writes of the elaborately staged "wedding," saying that, although the whole thing was meant as a satire of our culture's obsession with weddings and perfection, it ended up being unexpectedly meaningful when some elements failed to go according to plan. She describes,

[I]t’s a day I will always remember as one of the most meaningful. The day in which I was taught, again, the lesson I was trying to teach others. That is – where the beauty of life is, the place in which you can truly find happiness, is in the letting go of expectations as your sole guiding force.

In addition to photography, Heintz is also working on a film series inspired by the project. Check out the trailers for the first and second parts of what will eventually be a trilogy: