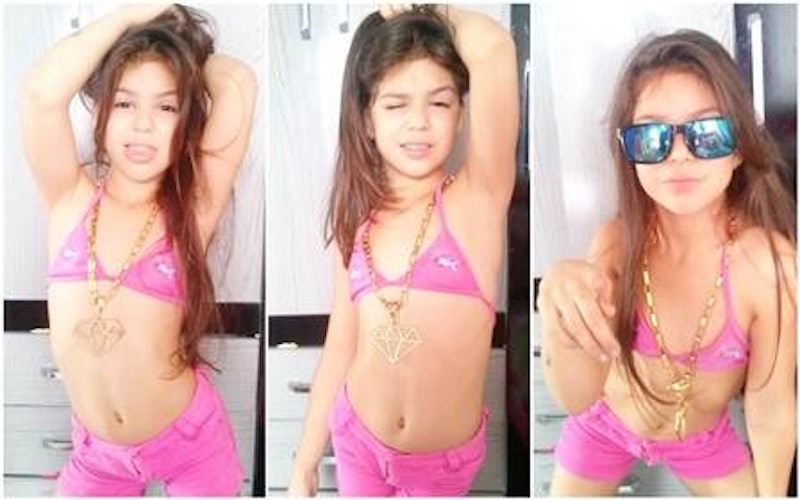 Whether it's toddler beauty pageants or 13-year-old Willow Smith pictured in bed with a 20-year-old, sexualized images of young girls will always make headlines. MC Melody, an eight-year-old Brazilian funk singer, is the latest precocious star to catch the public's eye, with her childish imitation of feminine seduction that punctuates the somewhat creepy YouTube videos she posts online. Melody has been performing since the age of two with her father, MC Belinho, and apparently her choice to look and act hypersexual is just fine with him.

I use the word "choice" a bit loosely here, because how aware are eight-year-olds of what it is that they're choosing anyways? On the one hand, it's important that parents let their kids express their sexuality as it comes naturally to them. Assuming humans are completely asexual until they turn 16 or 18 or whatever is dangerous and patently false. On the other hand, you can argue that an eight-year-old doesn't even have much of an original sexuality to express. Even a moderate immersion in contemporary pop culture without the right guidance can teach girls to mimic pornified music videos without the critical awareness of the fact that women can be more than mere sex objects.

As a staunchly sex positive feminist, watching Melody's videos is still upsetting. She looks adorable and her moves are super cute, but I can't shake the feeling that privileging sexual attraction above all else from such a young age is setting her up for a rude awakening down the line. Owning your sexuality and doing what you wish with your body without stigma is crucial, but it's something you should grow into with time. While there's no one way to parent young girls, letting them know there are other ideals besides being sexy and appealing to the opposite sex is a good place to start.