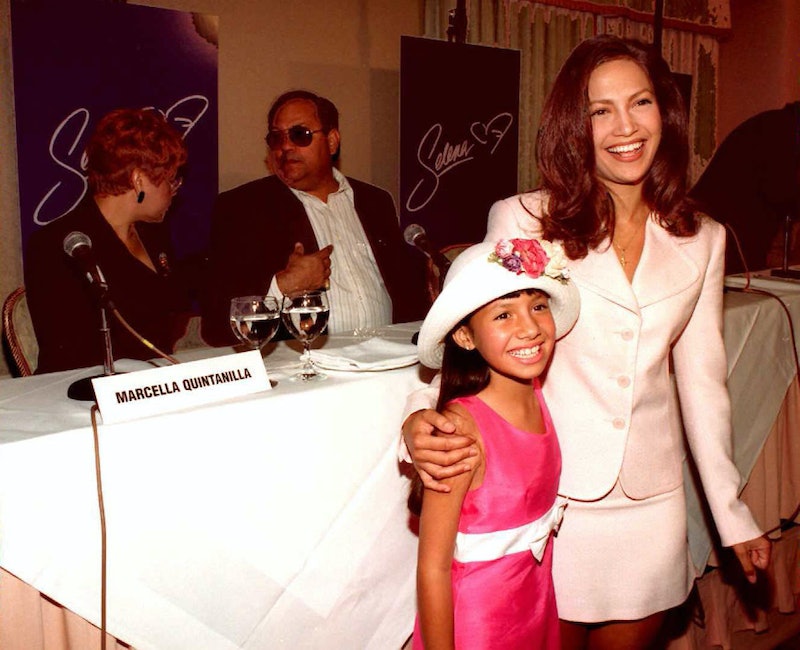 March 31, 2015 marked the 20th anniversary of Selena Quintanilla's death and fans around the world got together to celebrate the life and music of the beloved Tejano superstar. Selena was an important part of my life, as I was a young Latina girl with dreams of being a singer, and she was one of the few artists who l could relate to. When I first saw the biopic Selena with Jennifer Lopez, I remember being totally jealous of the girl who got to play a young Selena when she was starting out in her family's band, Selena y Los Dinos. Now that it's been nearly 20 years since the film came out (it was released in 1997, two years after Selena' death), I wonder what ever happened to Becky Lee Meza, the young actress who got every young Latina's dream role?

Well, just like me and others, when she was cast, Meza was a young 9-year-old Latina girl living in Texas who was completely devastated at the news of Selena's death. In a 2007 interview with the Valley Morning Star, Meza said,

It was the worst day of my life... I just figured it was an early April Fool’s Day joke — the worst kind. I just lost it. She was the first person I ever knew about that had died.

When she was younger, Meza said she went to schools with all "blond-haired and blue-eyed" girls and felt like that's what she needed to be, as well. That's where her admiration of Selena began. As she put it, “This was somebody I could look up to, somebody who looked like me. There weren’t a lot of role models back then for little girls like me.” That soon led to Meza and her family traveling around to Selena look-alike contests when she heard of the Selena film casting in Houston. After a few auditions, she beat out 20,000 girls and the rest is history.

But what happened after? Her singing voice was dubbed in the film, but Meza herself was a singer. After the film debuted, Meza recorded her own album of songs for other children. According to her Morning Star interview, she tried her hand at a singing career after high school and moved to Austin to pursue music, but it never took off.

At the time of the 2007 interview, she had opened her own business, Rebecca Lee’s Flowers and Bridal Boutique, which was decorated in Selena memorabilia and photos with her co-stars. She has not been a part of the entertainment business since her days on the Selena set, but the wife and mother is still a Selena fan and takes part in keeping her memory alive.

April 17-18, 2015 marked the first annual Fiesta De la Flor, a two-day festival that celebrated the life of Selena, "Queen of Tejano." KIII TV in South Texas interviewed Meza, who spent the weekend at Fiesta de la Flor and met with fans. Both the news anchor and reporter were starstruck to speak to Meza, with the anchor explaining, "I wanted to be her so bad in the movie!" As for Meza, she said of her time at the festival, "[Selena] obviously impacted a lot of people, especially here in Texas since this is where she was from. It's an honor to be a part of this festival going on and it was an honor to be a part of the movie."

So, although she's not acting or singing anymore, Meza can definitely say she was an important part in keeping Selena's memory alive on film, and that is something to always be proud of.