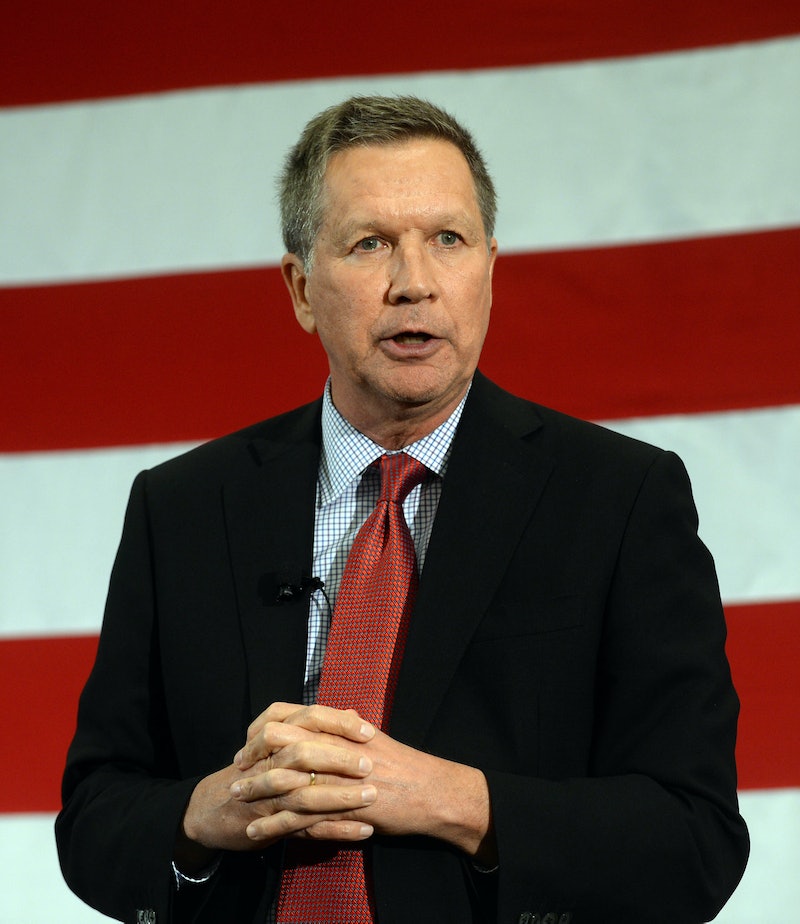 Another Republican candidate might soon be announcing his 2016, but he’s waiting on word from one more person before he makes his decision: God. This weekend in New Hampshire, Ohio Gov. John Kasich seemed more serious than ever about entering the race. However, he says that he isn’t quite ready to officially announce because Kasich is still waiting on a signal from God.

When Kasich appeared on NBC’s Meet the Press on Sunday, he hinted toward the very possible reality of his presidential bid, but he was not yet ready to offer up a firm answer. And while he said that all of his “options are on the table here” and that he is “more and more serious,” there are still a couple of things that trump all else in his decision-making process.

My family is a consideration. Number two, the most important thing is, what does the Lord want me to do with my life?

However, he knows that he's "not going to figure [it] out laying in bed, hoping lightning strikes," so he's been active on the campaign trail just in case. Just this past weekend, Kasich traveled to two key early voting states — South Carolina and New Hampshire. Moreover, The Washington Post reported Monday that Kasich just moved one step closer to a presidential bid with the launch of a new 527 group — a tax-exempt organization — called New Day for America. Former Sen. John E. Sununu, a big name in New Hampshire and in politics, will serve as director.

Kasich is even assuming this "take it slow"

technique when courting his potential voter base. When he made his second trip to New Hampshire during the election cycle this past weekend, he urged the audience to, “Think about me, would you? Don't commit too soon. Let us all have a chance to breathe.”

But if Kasich does decide to run, his landslide win to a second term as governor indicates that he has the ability to offer up some serious competition to other Republican contenders. According to MSNBC, Kasich's biggest competition would likely be Jeb Bush, who has already positioned himself as the moderate Republican in the field. Kasich isn’t too worried though.

I have more experience than anybody in the field. That’s really what I have that stands out. I don’t just talk about what I want to do, I can tell people what I’ve done.

So, just what has he done and what does he want to do? Well, Kasich, alongside his tenure as governor, also served 18 years as a congressman and served as chairman of the House Budget Committee. He has been heavily promoting a federal Constitution amendment to balance the budget. However, he might face some disapproval from conservatives for being one of the few Republican governors to accept Medicaid expansion under Obamacare.

What people in Ohio want to know is, do you get them and their problems.

Depending on what signal Kasich gets from God on whether or not to run for president, it will soon become apparent whether the rest of America is on the same page as he is, and if Ohio and the rest of the country really is in support of his moderate views.