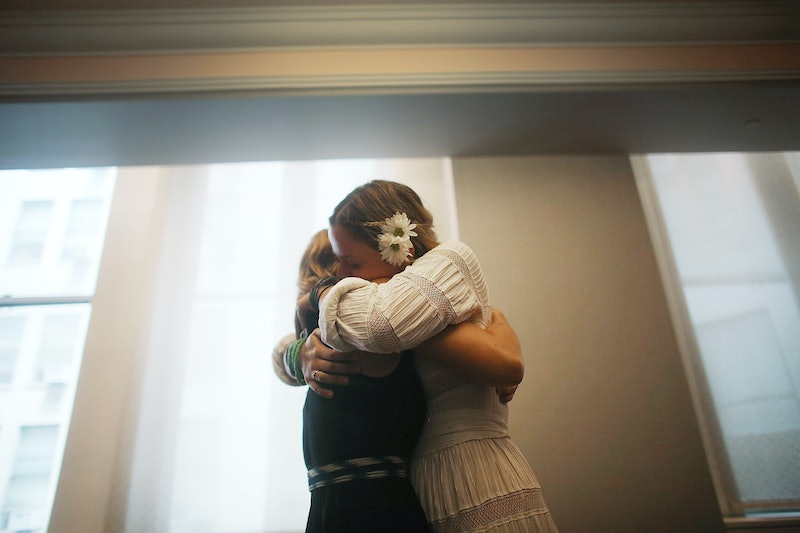 Oh, why do people we love end up dating the worst people? Actually, most of us have gotten ourselves into relationships with the worst people. And while we all have to learn everything for ourselves, hindsight is 20/20 and I bet you wish your friends had been real with you. Even though you would still have had to come to the conclusion to break up on your own, maybe you'd have been prompted to make that dreaded decision sooner. So, if you're wondering, how do I tell my friend to break up with someone?, it may be time to let her know. One of the most important things for you to think about as you plan this conversation is why you want to break up your friend's relationship in the first place. Just because you personally don't like a friend's partner doesn't mean the relationship is a bad thing. Same thing goes if you aren't comfortable with your partner's relationship style, but your friend is happy. You don't have to date the person, so if you simply don't like their quirks or tastes, then girl please hush.

That being said, there are plenty of very serious reasons why you may want to disrupt your friend's relationship. Perhaps your friend is experiencing domestic or dating abuse — be it physical, sexual, and/or emotional —from a partner. This is an extremely serious situation in which, heartbreakingly, you are powerless until your friend comes to a personal realization and understanding of the abuse. But it's wonderful that you want to help, and you can support your friend throughout this harrowing ordeal.

As the US Office of Women's Health explains, you should set up a private time to talk, explain your concerns from a loving place, openly listen to her reaction, provide specific help (transportation, names of shelters, etc.), never shame or blame her for being in that kind of situation, and support her no matter what she chooses to do about the relationship. Read through the rest of their website for more important tips and resources! If your concerns about your friend and her partner do not fall into the very serious category of suspected or known abuse, but something's still gotta give, may I humbly offer a few suggestions:

Why are you trying to break up your friend's relationship? Is it because you love your friend, or is it because you love the drama? Before you try to meddle in your friend's partnership, make sure it's because you want to better her life and not because you're bored and/or petty. You're about to tell her something that could anger her, depress her, or cause her to experience a whole multitude of unpleasant emotions and conversations. It has got to be worth it or you need to, in the wise words of Tamar Braxton, have several seats. And as aforementioned, if you don't like your friend's partner enough to say something, it's because you can't support the negative ways the relationship is affecting her life. Not because you had more fun going out dancing together when she was single. Problems can definitely arise between friends because of romantic relationships, and you should totally address them and respectfully express your concerns. However, you don't have to immediately jump to the most extreme course of action. So, before you do anything, check yourself, and then chill if need be. Your drama has no place in this situation.

Now, move forward with the plan if, once checking yourself, you've confirmed that this is a real emergency. For example, if you know that your friend's partner is cheating, good job for having your gurl's back and wanting her to free herself from a relationship in which she is lied to and disrespected. No one deserves that sort of treatment, so your #1 B definitely doesn't deserve it. While nothing trumps the devastation your friend will likely experience, it's also difficult for you as a friend to have that kind of information and muster up the courage to share it. If you are about to give your friend information that will break her heart and potentially destroy a very important relationship in her life, then you better have the proof to back it up.

Giving your friend horrible news and pressuring her to act on it without being able to cite your sources is a terrible thing to do to a person — especially someone you love and want to protect. #NoHunches. You're essentially upsetting her for no reason, and she has every right to be mad and question your judgement. Be ready to show those receipts, or keep your mouth shut until you can provide them. This really goes for any justification that you may have for telling your friend that her partner sucks and she needs to take out the trash. This is not something she will want to hear from you, so examples are everything if you're planning to get through to her.

Do not send a text message to tell your friend to break up with a partner. The only time this is acceptable is if your friend prefers to discuss things over text. Obviously, when telling your friend something upsetting, you want to make sure you use the method in which she is as comfortable as possible; she is the priority. Otherwise, you better respect your friend enough to make time to meet in person so that there is no chance of miscommunication or dead phone batteries in the midst of a serious talk. Also, you want to be there to immediately comfort her or further explain your reasoning if she becomes angry (you're just jealous etc., etc.). If it's not possible to meet in person, a phone call or Skype date is the next best thing.

4. Be The Leslie Knope To Her Ann Perkins

If you're telling your friend to dump someone, it best be because you think she is an intelligent, strong, beautiful person and she deserves so much more than she is getting from the kind of scrub TLC tried to warn us about. If that isn't your motivation, then please once again refer to #1 on this list and get your life right. But if you are doing this for the right reasons, prepare to provide all the support she needs. If you were the one who suggested a breakup in the first place, then you are the one who has to help her through it. You should be ready to shower your friend with compliments (aka facts) because relationship struggles are rough and she might start blaming herself for the love affair's downfall. In short, be Leslie Knope.

You also want to assure her that breaking up feels awful right now, but is positive in the long run. Be like Lindsay Weir in that scene from the beloved yet short-lived TV comedy Freaks and Geeks. When Kim Kelly sadly tells Lindsay that she has finally broken up with her on again-off again boyfriend Daniel Desario, Lindsay pauses, then exclaims, “Well...congratulations!” On that same note, she might disagree with you and just not be ready to pull the plug; you need to support her through that, too. If you get frustrated and start ignoring her, then the isolation will cause her to turn to her terrible partner even more, and that's the exact opposite of what you want.

Now that we've discussed what you need to know in preparation for the big moment, let's get to the actual conversation.

This can also be described as testing the waters. If a breakup is not urgent for your friend's safety, you gotta drop some subtle hints before you make a grandiose statement about ending the relationship. Get real with your friend, and then pull it back a little bit. There are a few ways you can do this. Sandwich a negative quality about the partner in between two good things: Congratulations on your five-month anniversary with Felicia! She's not still trying to make you feel bad about your promotion at work, right? She's so lucky to date a boss lady like you.Or you could just drop a truthbomb and then change the subject: Hey, didn't Carl say something racist the other day? Ooh, your scarf is fun! You know, like that. Remember, no one can break up the relationship except your friend herself. All you can do is try to point her in the right direction over time. The rest is up to her.

This method is taken straight from the character Phyllis Lapin in The Office. If you have rewatched this series as often as I have, then you remember the dysfunctional relationship between Michael Scott and Jan Levinson (formerly Levinson-Gould). During a conversation with the women in the office in the episode "Women's Appreciation," Michael reveals all of the disturbing things he goes through in his relationship, from filming their sexcapades and watching it back with her therapist so he can “improve his form,” to simply being unhappy when they're together. He writes a pros and cons list about breaking up, but still can't decide what he should do.

Finally, using a trick she says her mother taught her, Phyllis rushes him and says, “I bet you know. Don't think, just answer. What do you wanna do about Jan?” In an instantaneous, honest reaction, Michael surprises himself and says “I wanna break up with Jan.” If your friend has described her unhappiness over and over, but is still hesitant to kick her own Jan Levinson to the curb, pull a Phyllis and see if it helps make things clearer. Of course, Michael's breakup didn't go too well since homeboy thought it was OK to dump her over voicemail, but your friend is smarter than that anyway.

If you have the type of friend who seems to only have awful things to say about her relationship but never takes action, then you will not be in the wrong for just shooting it to her straight. This confrontation is earned over a long-ish period of time. By that I mean, if you have to go through months and months of texts from your friend before you get to one that isn't about the problems she has with her partner, then please go ahead with some real talk. 1. Clearly your friend feels trapped. She needs to know that singledom isn't scary, and that it's always better than a horrible partnership. Let her know it's OK to take charge and end something. 2. Let's be honest. When a breakup is obviously the best, necessary solution, but you are constantly forced to play free therapist for a relationship that is beneficial for literally no one, it gets frustrating as hell.

You're allowed to express that, especially because your friend's well-being is still being treated as the priority. When your friend starts talking about how unfair or disrespectful her partner is for the 378th time, don't be afraid to say something: This has been going on for a while, and it's really affecting your ability to be happy. Nothing seems to be making it better. It seems like it might be time to end it — don't you think?

If you've had ~the real talk~ and she decides she definitely wants to end the relationship, it might take a little bit of encouragement. (Breaking up is hard y'all, it's understandable). Throw a celebration, just between the two of you, for her upcoming, much happier single life, complete with a decorated cake. May I suggest Do The Damn Thing in her favorite colored icing? Cake makes even the worst things easier to swallow.