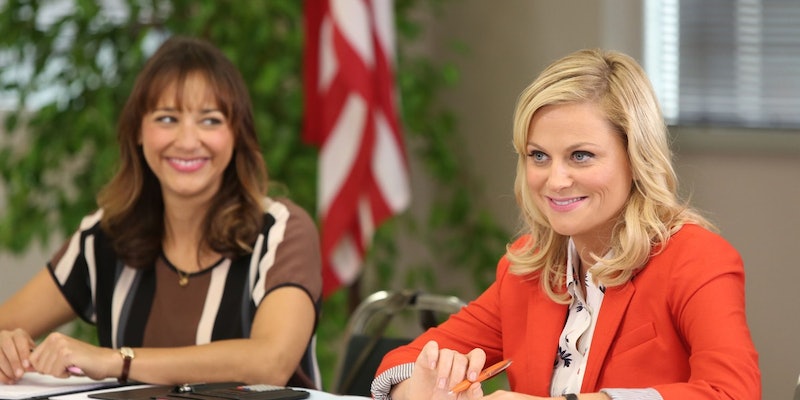 So much has already been said about how badly Parks and Rec fans will miss the show once the series finale airs that it doesn't need repeating — those of us who've tuned in for the last seven years know just how hard the days after the show's final episode will be. The only thing that makes the series' end a bit easier? Knowing that we already said goodbye to one of Parks' best elements long ago — the amazing, beautiful friendship between Leslie Knope and Ann Perkins.

As fans know, Leslie and Ann have been best friends since season 1, when the two met during a department meeting in which Ann advocated for the town pit to be filled. In the years after, the women became inseparable, sharing clothes, advice, and a love for Harry Potter movies (What? Ann saw all eight!) Their bond was one of the best depictions of female friendships on TV, and when, last season, Ann left Pawnee for Michigan, it was heartbreaking to watch the duo say goodbye.

Thankfully, neither Leslie nor viewers have had to do without Ann for long, as she's already returned once to the show, is mentioned frequently, and is expected to take part in the series finale. And, of course, there's Netflix — in which fans can rewatch Leslie showering Ann with compliments as many times as their heart desires. Below, the nine best things Leslie has ever said to her beloved friend (real-life BFFs, take note):

Leslie has given a thousand variations of the "beautiful, other adjective, random animal" compliment to Ann, but this one's particularly great — it just flows so well!

"You are a beautiful, talented, brilliant, powerful musk ox."

Then again, this one's also amazing. So empowering.

"Tragically, we are both heterosexual."

What joined-at-the-hip BFFS haven't a) been confused for a couple and b) bemoaned the fact that they weren't?

"I need you to text me every 30 seconds saying that everything is going to be okay."

Real best friends have each other's backs, even when it's time-consuming and kind of overboard.

"You are so brilliant and kind and stupid hot."

What girl doesn't need to hear this every once in awhile?

"He’ll never lasso another heifer as fine as you, Annie Oakley."

At one point or another, everyone's needed some help getting over an ex. This is exactly what to say.

"You’re definitely going to find a wonderful guy who loves you and respects you and fills your home with multiethnic genius babies."

As well as some encouragement that you'll find someone better in no time.

"You're Ann Perkins. Sperm that is worthy of your perfect eggs does not grow on trees."

But also, a reminder that there's no need to rush, because you're amazing just as you are.

The mantra of all BFFs everywhere, and one that Ann and Leslie never, ever forgot.