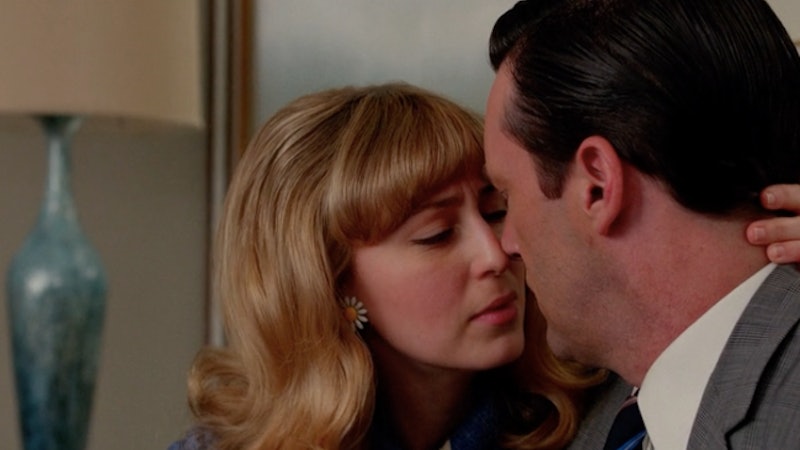 Like a decadent dessert, fans of AMC's groundbreaking Mad Men are savoring each installment on Sunday nights, as only a few episodes remain before the series bids us adieu. Throughout all the smoldering intensity that envelops Mad Men's canvas, actress Stephanie Drake has taken on the formidable task in Season 7 by using her comedy prowess to make Meredith — the complaisantly doe-eyed secretary she portrays — a certified scene stealer. After only being allotted sparing appearances during her debut in Season 5, Drake has since appeared regularly, punctuating even the gravest of scenes with her perky — albeit, lightheaded — presence.

It wasn't until the the mid-season finale episode, "Waterloo," that audiences were given a glimpse of Meredith's fragility when being faced with the termination of Don Draper, a supervisor she apparently had much more affection for than we realized. Her voice scratchy with the threat of tears, Meredith attempted to assuage Don's peril at losing his job by whispering "I am your strength," before kissing him. Don had clearly learned something from the litany of hookups and extramarital affairs he had accumulated over past seasons, as he rebuffed Meredith's advances. Thus far, we haven't seen any further advances from Meredith, which may be for the best, given a Meredith/Don pairing may be silly enough to send our brooding lead foraying into Bridesmaids territory — then again, that might not be such a bad thing, given Bridesmaids is pretty much the epitome of awesomeness. Drake, however, doesn't think her character would do well as Don's other half, or even as a hookup.

"Only in an alternate universe that Meredith controlled would they make a perfect couple," she tells me. "She would take such good care of him at work and at home. In any other world, they would never work out. Don has way too many issues, and Meredith needs someone a little more stable and closer to her age."

As for the other leading men, Drake is equally opposed to the idea of Meredith exploring any type of romance. "I don’t think any of the male characters at SC&P would fully appreciate Meredith. They all assume she’s an idiot, anyways, after the airplane incident. She would be better off with someone who doesn't work there." Given the trials other women at SC&P have experienced via office romances, that's probably a good idea.

More like this
Megan Thee Stallion Actually Auditioned To Be This 'P-Valley' Main Character
By Radhika Menon
15 Photos Of The 'House Of The Dragon' Cast At The Show's UK Premiere
By Radhika Menon
'Stranger Things' Season 5 Will Echo Season 1 In A Key Way, The Duffer Brothers Confirm
By Kadin Burnett and Sophie McEvoy
‘Squid Game’ Creator Hwang Dong-Hyuk Just Dropped A Major Season 2 Tease
By Brian Anthony Hernandez and Bustle Editors
Get Even More From Bustle — Sign Up For The Newsletter