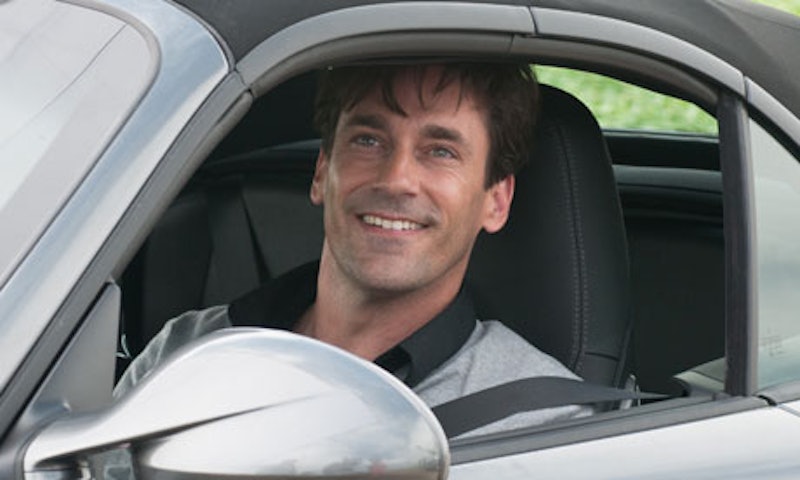 Don't even try to deny it: Jon Hamm is a man of many, many talents. With his inimitable acting chops, he has been able to nail performances that alternate between raw intensity and side-splitting hilarity. In the groundbreaking AMC series, Mad Men, Hamm embodies all the tormented complexity that characterizes brooding businessman, Don Draper. Don's penchant for infidelity (tsk, tsk!) is certainly not excusable, but the guilt he experiences over said infidelity coupled with his inner pain and scars leftover from his past allow this character to remain an anti-hero that we still want to root for throughout the series. In Bridesmaids (otherwise known as the best movie to ever exist), Hamm plays Annie's (Kristen Wiig) dim-witted booty-call, Ted. Ted is portrayed as the jerk of the film, refusing to meet with Annie for anything other than a hookup, and even kicking her out of bed when the sun has barely risen!

On the surface, these two characters may seem like polar opposites aside from the fact that they enjoy casual encounters with the ladies. However, as a self-proclaimed expert on both characters — and by expert I mean I'm an avid fan of binge watching Mad Men and my viewing of Bridesmaids has probably reached the triple digits — I have noticed various similarities between Don and Ted, which have led me to believe that they may actually be the same person. Maybe Don built a time machine or something in the 1970s and emerged in 2011 as Ted? Let's take a close look, shall we?

Both Characters Are Super Rich

Don Draper is loaded due to his success at SC&P. We don't learn too much about Ted's job or anything that occurs outside of his bedroom, but judging from the interior of his home, he is making tons of moolah.

Both Characters Love The Ladies

By "love" I don't necessarily mean that they always respect the ladies, but both Don and Ted have proven themselves as avid fans of the opposite sex.

They Also Infuriate The Ladies Sometimes

Cheating and relegating women to booty-call status doesn't always go over so well.

As debonaire as Don is, he has still been guilty of more than a few instances of needing to insert his foot into his mouth. As for Ted...well...

They Both Make Us Laugh

As serious as Don can be, he still knows how to split some sides when it's called for. Meanwhile, Ted is just ridiculous in the most hilarious of ways.

They Both Have Killer Style

Don is one leading man who really knows how to — in the words of Barney Stinson — "suit up." In Bridesmaids, the one time we see Ted actually wearing clothes, he looks as dapper as can be.

We Can't Resist Either Of Them

As infuriating as both can be, that charm can be a formidable opponent when it comes to resistance.

Thank goodness both are fictional, or I might be in some real trouble over here!