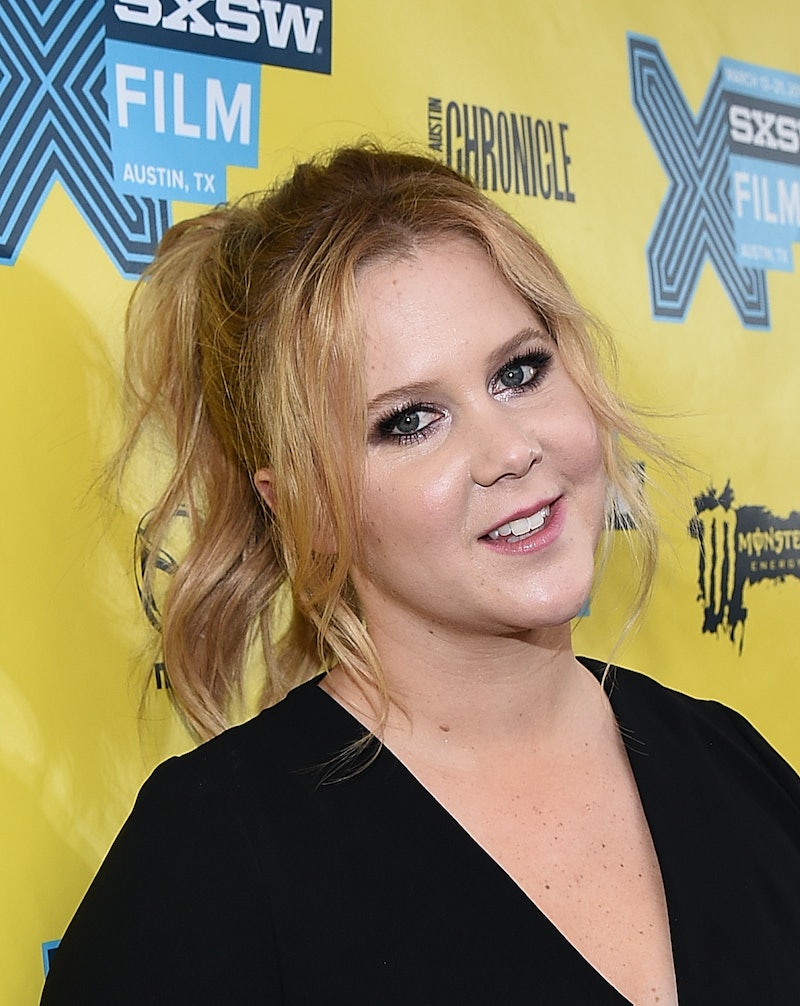 Is anyone surprised to hear this really? On Monday, Amy Schumer appeared on The Late Show with David Letterman and took the time to announce that Inside Amy Schumer has been renewed for Season 4 — before Season 3 has even debuted on Comedy Central. You know what was the last show to give us that kind of amazing news? Orange Is The New Black, which was renewed for a fourth season ahead of the Season 3 premiere on June 12. That kind of thing warms my heart, not only because Schumer hosting the MTV Movie Awards proved to anyone who didn't know that she is the absolute height of comedy, but because it feels like amazing feminist shows are finally being recognized for how amazing they are.

For those who have never seen the show, Inside Amy Schumer is a combination of feminism, toilet humor, sex humor, and everything in between. There doesn't seem to be a topic that Schumer will leave unmocked, which elevates her to the same comedic level as her male contemporaries. It might be my own personal bias talking, but I would even say she surpasses many of them — especially considering how often many male comedians fall back on the shock factor of a disappointing and callous rape joke. You can love her, or you can hate her, but anyone who claims that Schumer has never made them double over laughing at some point is lying to themselves.

The fact that Inside Amy Schumer has become the second feminist show this month to receive a new season order before the next season has even come out is a huge victory. The show might be good independently as a comedy series, but it also explores a lot of great feminist themes and women's issues in the most hilarious way possible. Such a heavy female focus used to be Hollywood's cue that this was a show that would isolate too many viewers to make it worth continuing, but now we have shows like Inside Amy Schumer, and like Orange Is The New Black, that prove that comedy isn't just restricted to one gender and that maybe the reason boys weren't watching shows about ladies is because no one was making any good ones.

Of course, I'm not saying that Inside Amy Schumer getting a fourth season means that every issue that women are facing with regards to representation on television is officially over. I'm just saying that it's a step in the right direction, one that gives women more visibility in the traditionally male-dominated field of shock comedy. Sure, that's a lot of pressure to put on Schumer's shoulders to be the representation of what women are capable of comedically, but the success of Inside Amy Schumer might lead to more shows featuring female comedians getting the greenlight. One day, we might actually reach a point where we can't count them on one or two hands. Until that day comes, I'll be parked in front of my television watching Inside Amy Schumer until the day the show comes to a natural conclusion.

More like this
At 14, Tatiana Maslany Was Obsessing Over Tamagotchis & The Spice Girls
By Gabrielle Bondi
The 'Better Call Saul' Creators Said "Never Say Never" To More 'Breaking Bad' Spinoffs
By Brad Witter
Naomi Osaka & Emma Raducanu’s Experiences Have Inspired A New Amazon Show
By El Hunt
Beyoncé & Madonna’s “Break My Soul” Remix Honors A Group Of Black Icons
By Stephanie Topacio Long
Get Even More From Bustle — Sign Up For The Newsletter