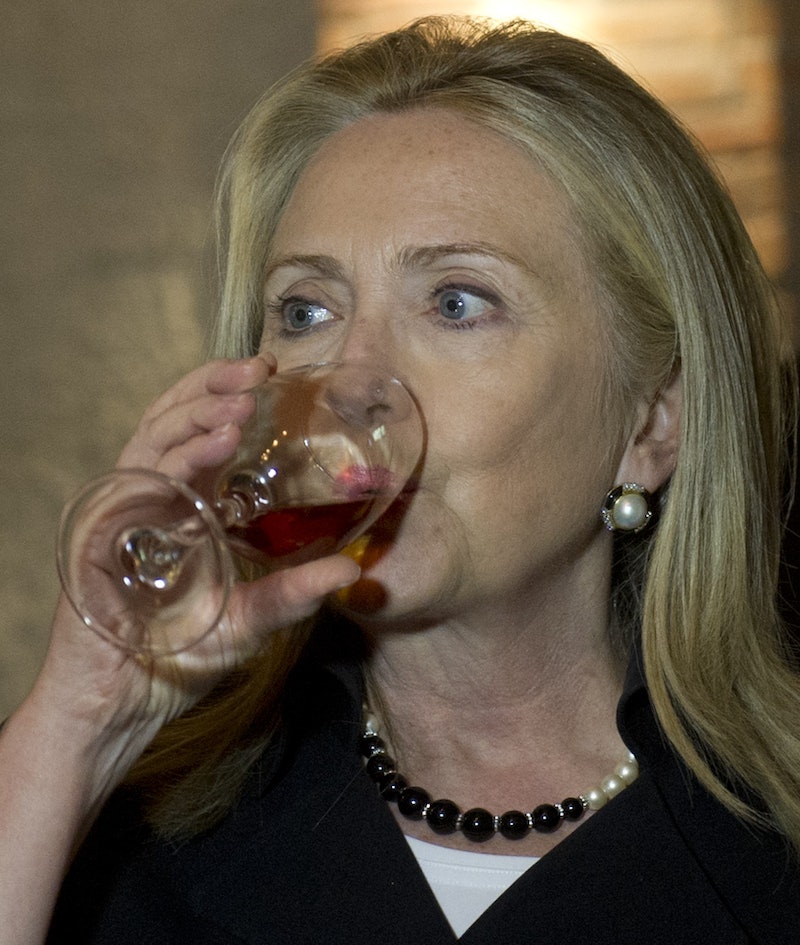 If you're looking forward to a dynamic and robust campaign from Hillary Clinton, full of bold and complex speeches on topics both light and dark, then why not sit back and enjoy each campaign stop with a nice glass of wine? But you don't want to be sipping a riesling when a speech calls for deep, bold notes, like Clinton's breakthrough speech on women's rights in Beijing in 1995, lest you be laughed out of both Napa and Washington. So, I've made for you a guide to pairing wines with Hillary Clinton's speeches, depending on the topic, tone, and occasion.

But before we get into that, let's talk about how versatile Clinton is, making her a sommelier's dream cuisine. Sometimes she can be tough (like a gamey lamb chop), and other times her speeches are more delicate (like seared scallops over a citrus salad). In other words, she can pair with a broad spectrum of varietals. While Rand Paul's speeches are best paired with a nice oaky Kentucky bourbon — not only because he's from there, but because you might need something harder to go with his rhetoric — Clinton's pair best with wine varietals.

And if you're still unconvinced that Clinton goes well with wine, Clinton Vineyards (no relation other than politically) even named a wine after her in 2013 called Victory White, which was launched to encourage her to run for president in 2016.

In order to prepare you for the long campaign trail ahead (that's a lot of wine, by the way, so you might want to consider joining a wine club or something), let's take a look at Clinton's past speeches and which wines would have paired best so you can establish a wine pairing game plan for all her upcoming stops.

Speech: Clinton's seminal speech at a Beijing women's conference in 1995 gave the world perhaps what is considered her most famous quote:

It's a message that she's been communicating and championing ever since. In April 2013, Clinton spoke at the Women in the World Summit, organized by media mogul Tina Brown, and echoed it once more. She told the crowd:

Wine pairing: A speech that rallies women around the world to keep fighting for equality requires an inspirational wine with bright flavors and a sweet finish. Medium-bodied reds, fuller whites, and even mead would be excellent choices. Medium-bodied reds include refreshing rosé, which can have fruity notes of strawberry, melon, and peach. Fuller whites like chardonnay are less refreshing and more buttery and robust, exactly the kind of tone you want to strike when discussing women's rights. As for mead, the ancient honey wine, its flavor is sweet without being cloying, which can also be said about the progress we've made with gender equality.

On Race Relations In America

Speech: In August, Clinton spoke at the Nexenta OpenSDx Summit in San Francisco, where she delivered an emphatic speech on Ferguson that The Washington Post called "surprisingly bold." Indeed, she didn't mince words, telling the audience, and America:

Imagine what we would feel and what we would do if white drivers were three times as likely to be searched by police during a traffic stop as black drivers instead of the other way around. If white offenders received prison sentences ten percent longer than black offenders for the same crimes. If a third of all white men – just look at this room and take one-third – went to prison during their lifetime. Imagine that. That is the reality in the lives of so many of our fellow Americans in so many of the communities in which they live.

Wine pairing: For bold speeches, you need an bold wine. Full-bodied red varietals like grenache, shiraz, and cabernet sauvignon would pair well with Clinton's Ferguson speech. Though it's a lesser-known varietal, the grenache grape makes some of the boldest wines in the world, with notes of spice and cherry. Shiraz is known for its spicy clove flavors, sometimes mixed with deeper notes like leather and smoked meat. Cabernet sauvignon is a wildly popular full-bodied wine that smacks your palate with hints of black cherry, currants, and olive.

On Being A Grandmother

Speech: In October, at a national convention of female real estate professionals in Miami, someone in the audience remarked that Clinton looked beautiful. She responded:

I think it's a grandmother glow. I'm very new at it, but I highly recommend it.

Later on, she was asked what advice she would give her new granddaughter, Charlotte. She said:

One is to do the very best you can at everything you do … but learn from your mistakes and your failures. Second, be kind. Try to find a time for kindness every single day.

Wine pairing: When Clinton talks about the happier things in life, like her granddaughter Charlotte, it's only natural to want to pair her joyful words with a light, crisp, refreshing white or sparkling white. A nice chilled riesling would be perfect as it picks up notes of lemon, lime, pineapple, and apricot. Sparking wine, like prosecco or champagne, would be great for the occasion as well because they're typically imbibed during social, celebratory occasions. Bonus: they can be mixed with orange or peach juice to make mimosas and bellinis.

Speech: Speaking of celebratory, there's no better occasion to drink to than Clinton's official presidential campaign announcement. On April 12, Clinton finally announced her official bid, ending the eager anticipation for millions of Americans. In her announcement video, Clinton said:

I’m getting ready to do something too. I’m running for president. Americans have fought their way back from tough economic times. But the deck is still stacked in favor of those at the top. Everyday Americans need a champion, and I want to be that champion. So you can do more than just get by. You can get ahead, and stay ahead. Because when families are strong, America is strong. So I’m hitting the road to earn your vote, because it’s your time. And I hope you’ll join me on this journey.

Wine pairing: That kind of passionate and emotion-stirring speech can only be done justice with the most complex of all wine varietals: pinot noir. Not only is it the most intriguing, least predictable varietal, it's one of the most celebrated. The wide range of notes can include anything from plum and blackberry to beet root and cola, making pinot noir always reliable but never boring, kind of like Clinton herself. According to the website Wine Enthusiast, pinot noir is known as "the iron fist in the velvet glove," which wouldn't be a bad description for a presidential candidate either.