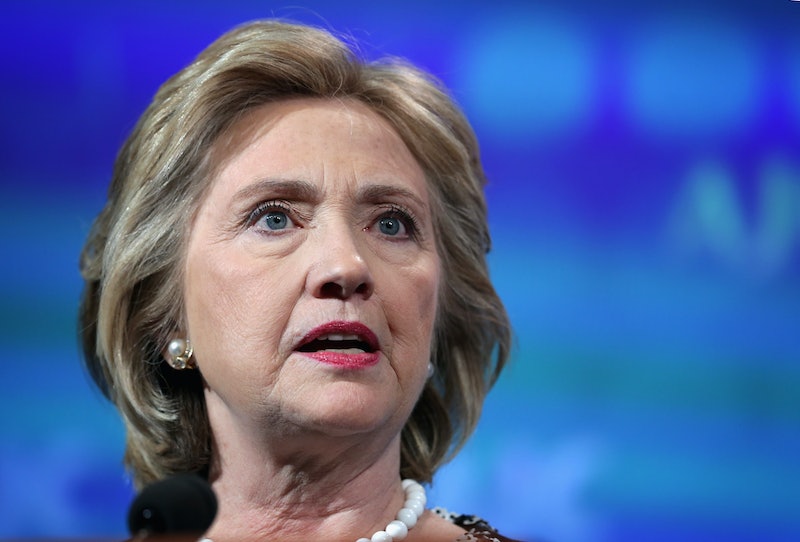 It was a moment that America — and, mostly, reporters — had been waiting for, well, since she lost the 2008 election. On Sunday, Hillary Clinton announced she was running for president for the second time since President Obama claimed victory in the primaries seven years ago. While reporters and political junkies flocked either to to her newly acquired campaign office in Brooklyn or to Twitter — where both #HillarysBigAnnouncement and #WhyImNotVotingForHillary trended during the day — to await her announcement, Clinton herself prepared to inform the country that she would attempt to clinch the Democratic nomination ahead of Nov. 8, 2016. So once she did declare her intentions for 2016, there was little doubt that the transcript of Clinton's video announcement would be inspected by pundits and voters alike.

So how did Clinton let constituents know that she's willing and ready to be subject to a frantic, public news cycle that would no doubt include as much sexism as tough questions as to her ability to lead the nation? Well, although her campaign chief John Podesta first broke the news to 2008 campaign donors, here's what Clinton said in her video released Sunday:

I'm getting ready to do something too. I'm running for president. Americans have fought their way back from tough economic times. But the deck is still stacked in favor of those at the top. Everyday Americans need a champion, and I want to be that champion. So you can do more than just get by. You can get ahead, and stay ahead. Because when families are strong, America is strong. So I'm hitting the road to earn your vote, because it's your time. And I hope you'll join me on this journey.

Interestingly, though, Clinton was hardly took on a starring role in her own video. Instead, she was merely the headliner, introducing some of her platforms via a diverse set of constituents themselves, who served as symbols for Clinton's views towards gay marriage, small businesses, and more. Among those featured in the video:

Clearly, Clinton meant for this to be more than merely an announcement video — instead, the candidate not only wanted to tease some of what was to come during her campaign, but to get the campaigning started early. After all, were your heartstrings not tugged? Were you not more intrigued by the former Secretary of State's second presidential runs than if you had simply read a tweet? But don't worry, that eventually came too:

So, yes, Clinton is clearly ready to run for office, as she has been since 2008. But, after this, are you ready for the campaign to come?