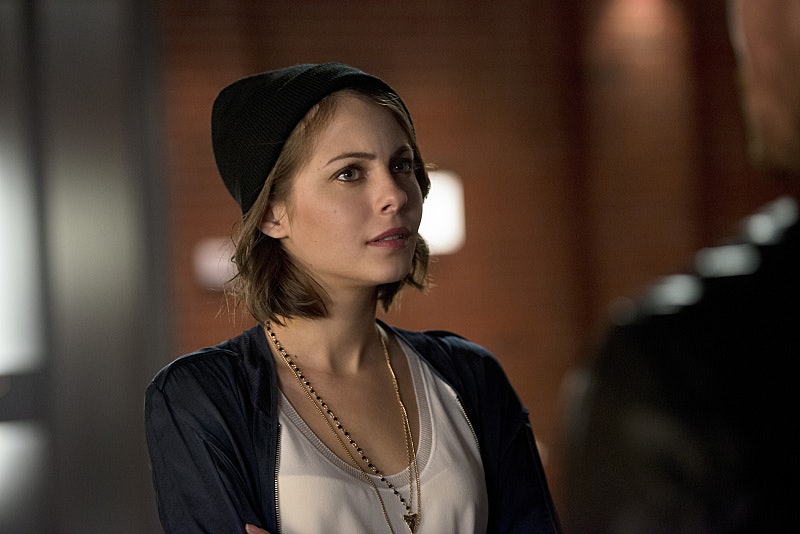 There are some shows that are pleasantly predictable, and then there are others that continue to knock you for a complete loop each and every week. I think we can all agree in saying that Arrow falls in the latter category. Last Wednesday's episode not only saw the series regular departure of Colton Haynes' Roy Harper aka Arsenal, but it also concluded with the alleged death of Thea Queen — Oliver's only remaining relative. (That he knows of, at least.) Which is partially what makes me fully confident in Thea's return. Arrow may be cruel with its surprise exits from time to time, but surely the writers wouldn't leave us with no Roy AND no Thea… would they? Well, if this week's episode promo for "The Fallen" is any indication, we seem to be in the clear. Thea will return, but what will she become in the process?

Oliver is desperate for anything that can save Thea's life, which is exactly what Ra's al Ghul was counting on when he stabbed her. Oliver is no longer thinking as the Arrow, but more like a terrified brother, which could lead to some very serious consequences in the future. Based on what the promo indicates, Oliver will, in fact, agree to become the new League of Assassins leader if (and only if) Ra's allows him to use the magical healing waters of the Lazarus Pit to save his sister. However, as Malcolm wisely warns: "The water changes people in the soul." (I hear these things do come with a price, dearie.) So does this mean that our poor, sweet Thea will become a different person altogether? And if so, how different? The way I see it, this presents the writers with an ideal opportunity to make her an outright villain.

I mean, I'm no expert, but seeing Thea rise out of that pit like a lion pouncing on its prey doesn't exactly scream "cured," at least in the typical sense of the word. Clearly, Ms. Queen is going to be seriously affected by this little bath time (or is it pit time?) excursion in a way that could carry the series well into its fourth season. "Everything in the show has consequences," executive producer Marc Guggenheim recently teased to The Hollywood Reporter. "It's something you will continue to see not just through the end of season three, but into season four."

Could he possibly be hinting that Thea will become next season's big bad? As much as it breaks my heart to think of another family tie crumbling in Oliver's masculine hands, I do like the prospect of a massive sibling rivalry storyline. Obviously, Oliver would never try to kill his own sister, but if she were to turn on him, how far would he go to protect himself and the ones he loves? It'd be a difficult line to tread, that's for sure, which would make for some pretty fantastic television.

It's unclear exactly which villain Thea would become. Some have speculated that she most resembles that of D.C. Comics character Cheshire. However, it is always possible that the show will choose to go rogue and create a brand new villain from scratch. Then we'd have absolutely no idea what to expect, which would make the stakes not only higher, but a lot more interesting. Thanks to Malcolm's training, Thea had already become quite the force to be reckoned with. So just think of what she'll be capable of by the time the Lazarus Pit's side effects kick in.

And now that Roy is officially MIA, I'm skeptical as to whether there's anyone who can help bring her back from the darkness. Prepare yourselves…