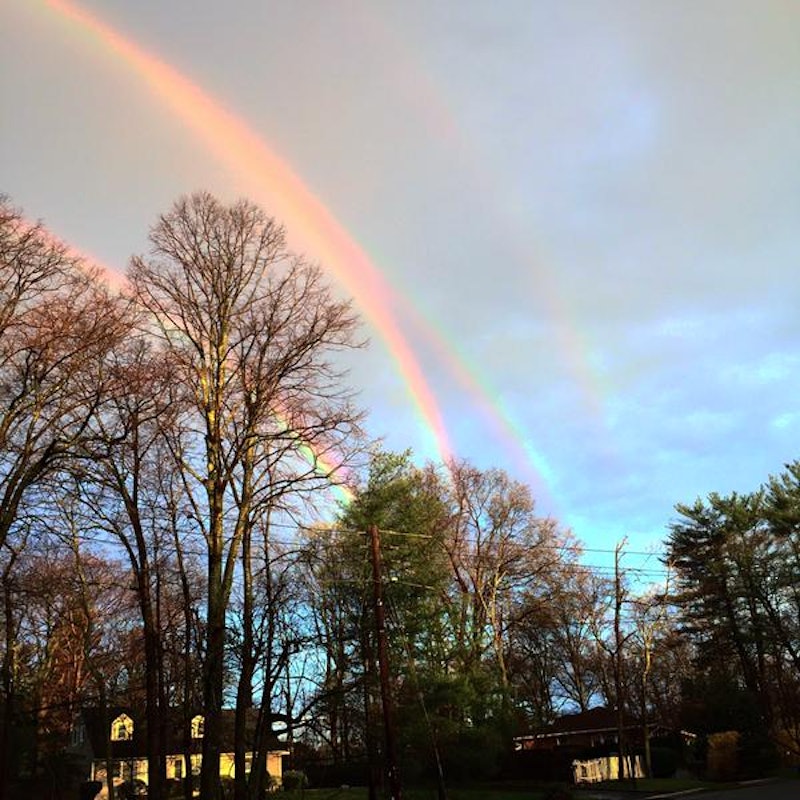 STOP EVERYTHING. There's a quadruple rainbow in New York City right now and it's about to make your day magical. I'm not talking a little pick-me-up here. I'm saying that after you see these pictures, you'll probably believe in unicorns. It will inspire your work day. It will inspire your home decor. So stop wasting time online and abandon your cozy desk chair to see if you can catch a glimpse of the rainbow remnants (or at least bask in the afterglow, which will probs give us all Rainbow Brite-worthy super powers).

This is twice as big as that lame-ass double rainbow thing. Literally twice as big. (Math: I'm good at it.) As we speak, the creators of Double Rainbow are probably rewriting the song to say: QUADRUPLE RAINBOW ALL THE WAY ACROSS THE SKY. Yeahhhhhh! So Intense!

What does this mean for New Yorkers? That it might actually be time to hang your coats up. Spring has sprung. April showers bring April quadruple rainbows. (Reappropriating the saying, "April showers bring May flowers." Just go with it.)

The Manhattan rainbows were spotted by Amanda Curtis, from Long Island, who was commuting to work when she stopped to take a picture of this crazy weather miracle. This isn't your average picture of the river you snap on your commute and heavily filter before posting it to Instagram. This is the real Earth's greatest mysteries deal.

And now, for the Quadruple rainbow in New York City. Here's Amanda's tweet:

Yes, of course I just followed her. Is that even a question? I want to hear about the next weather miracle straight from the source.

And here are the amazing photos that followed. The excitement swelling over this is a testament to how rough this winter has been. New Yorkers DESERVE this rainbow. And they were keen on catching any glimpse of the rainbows that they could find.

Oh, NBD. Just a shot from an airplane.

I hope there's a pot of gold too. Taste the rainbow, NYC.

And now, I think we need to briefly revisit the Double Rainbow videos. As you probably know, it was based on this man:

"Oh my gosh! Look at that!" He was pretty overwhelmed by the double rainbow blessing. What a guy.

And then there was the REMIX:

After this video came out, my roommate and I dressed up as a double rainbow for Halloween and sang this song for 6 hours straight. We were a real treat to be around.

Happy first annual Really Freaking Awesome Rainbow Day, New Yorkers. May we watch these videos every April 21 in its honor.