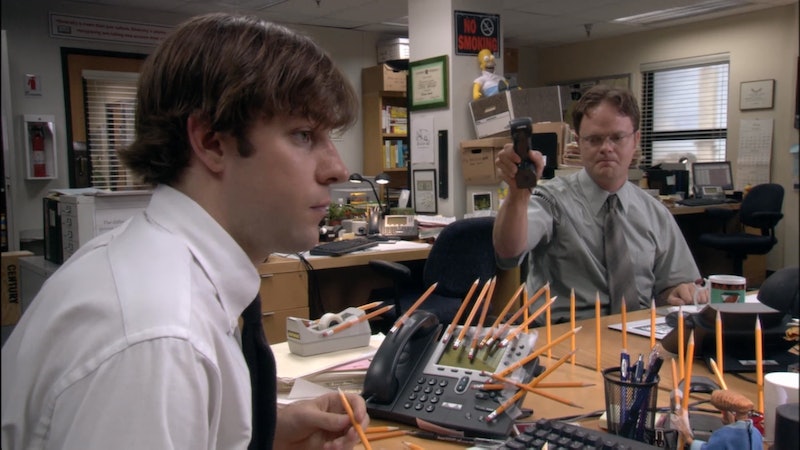 Some days, despite all your best efforts, you just can't get anything done at work. And on a week like this — a week that, for many of us, is the last frontier standing between us and our holiday travel plans — your best efforts are nowhere in sight. You have been overtaken by the monster known as Workplace Boredom, leaving you with a whole lot of nothing to get done for the next few days. The only solution, of course, is to double-down your efforts, and really dedicate yourself to getting stuff done this week. Ha ha ha, just kidding, but really, you should have seen your face! No, the only solution is to really dedicate yourself to goofing off on the Internet this week.

Hey, if you want, you can check out the research that says that light Web surfing breaks make you more productive at work, but let's be real here: There is nothing "light" about the Web surfing that you are going to do this week, especially come Thursday and Friday afternoons. You are going to go further into the Web than you have gone since, well, this time last year. You are going to Journey to the End of the Internet.

In order to help you on this journey, we've compiled nine of the best time-killing, office-boredom fighting Internet ideas below. Use them in good health and/or when you get so bored that you start trying to convince yourself that you can afford to buy some $400 shoes (you can't, you shouldn't, and no, you definitely did not "earn" them, missy).

Check Out Some New Web Series

The week before the holidays is basically a paid furlough created by your boss to help you get really into a new Web series. So why not do exactly that? The Internet is full of teeny, tiny TV shows waiting for your love and/or obsessive Tumblr-ing. I recommend genius comedian Charla Lauriston's Clench & Release (video above), a series about the hassles of city living, young-ish adult life, and being a kinda awkward human being; or Sound Advice , where SNL's Vanessa Beyer plays an inept music publicist who gives clueless career advice to everyone from Drake to HAIM.

If the idea of a whole week of just goofing off on the Internet rubs you the wrong way: 1. You are thoroughly un-American, and 2. Fine, be that way, here's something educational you can do with your week of lazy time. Project Gutenberg is a massive Internet database of classic books that have fallen into the public domain, and includes pretty much every 100-plus-year-old American and British novel from your high school reading list, which you can read right there in your Web browser without downloading anything. So if you've been lying about having read Pride and Prejudice for the past five years, why not make this the week when you plow through that bad boy?

Will playing super-old arcade games with low quality graphics become the next retro trend, like this whole "Rihanna flip phone" thing? Almost definitely not. But that doesn't mean you shouldn't spend some of your office downtime acquainting yourself with the selection of B.S.F. (Before Street Fighter)-era games available on The Internet Arcade, a spin-off of the Internet Archive. The site collects dozens of old arcade games that you can play on your computer without downloading anything, like Jr. Pac-Man.

Find Out What Happened Today in History

Have you taken your retro obsession for Delia's, Dunkaroos, and Backstreet to its logical conclusion, and are now living completely in the past? Great! There are plenty of Web resources to help you feel like you are living in a time warp, where you're not yet an adult who has to pay her own rent and file taxes and figure out how her health insurance plan even works. Yahoo's Today in History helps you look up every historical event that happened on this day in the past, and Billboard's This Week in Billboard Chart History offers a hand-picked selection of songs that were number one this week during Billboard's 100-year-plus history. Ooh, you're like a sexy, futuristic time traveler now! Go into the past and tell everyone in 2006 how Lost ends!

Are you somewhere where it's very cold? And are you about to travel to some place where it's just as cold, if not possibly colder? Sometimes, the only way to make it through another three months of life in a northern town is to plan a fake dream vacation to a warm place. I like to hop on all of the major travel sites — Orbitz, Kayak, Expedia — and plan out a pretend winter trip to Vegas or Key West or Australia, where it is SUMMER RIGHT NOW, PEOPLE. I like to price out the airfare and hotels, look at the websites for the local attractions, and really get a feel for what it would be like to be there, sipping a margarita on a terrace, instead of here, where I am trying to figure out if Spanx can also function as long underwear. Plus, sometimes this game ends in your figuring out that you really can afford that January trip to Key West after all!

I Can Has Cute Internet Animals

If there is anything that the Internet is never in short supply of, it's cute animals. There are, of course, the Web animal classics like Cute Overload, Tumblrs that curate cute animal GIFs, and blogs dedicated to your very favorite animal (I enjoy The Daily Frenchie, a collection of French bulldog glamour shots). But sometimes, the Internet offers even weirder cute animal attractions —like this pug from Germany, presumably named Sanger, who wants to brighten your day via this looped video of him licking your screen. Awwww, good boy! It really takes the edge off. Like, more than I am comfortable admitting.

If there's ever been a time to fall down a Reddit rabbit hole, it's the week before the holidays, when you have zero motivation to do anything but click, and all the time in the world to sort through dozens of pages of chemical reaction GIFs or people's stories about encounters they had with maybe-aliens.

In 2000, when we wore those tops with the one sleeve and were still not 100 percent sure what was going to happen between Ross and Rachel, the Internet birthed some of the very first viral videos. They were animated in Flash, Quicktime, or Shockwave, and took approximately nine hours to download on your dial-up connection.

Go back and revisit the beginning of viral video culture/the time when you got yelled at by your parents for tying up the phone lines, with late 90's/early 2000s viral classics like "All Your Base Are Belong to Us," the above-featured Radiskull and Devil Doll, or those kooky G.I. Joe PSAs. If these take you back to a time when you had Uggs and/or a "scene" haircut and a LiveJournal, good for you. If you have no idea what I am talking about, please stop making me feel old.

So it's come to this, huh? Yes, yes it has — you have finally hit the point in your pre-holiday week where you're looking to pop bubble wrap on the Internet. Don't waste time being disappointed in yourself, just go with it.