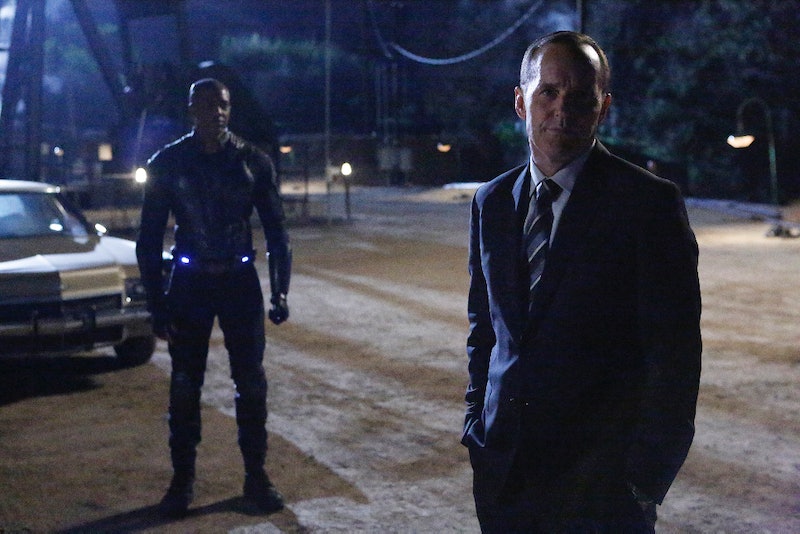 Just when you thought Phil Coulson couldn't have any more secrets, Agents of S.H.I.E.L.D. is about to drop a big one on us. Two words have been tossed around a couple of times on the ABC series and they're about to change everything. What is the "Theta Protocol" on Agents of S.H.I.E.L.D.? As we near the release of Avengers: Age of Ultron and welcome Agent Maria Hill back to the small screen, we need to start readying for the big reveals.

Theta Protocol has been mentioned twice so far on the series. When asked in an interview with Entertainment Weekly, executive producer Jeffery Bell revealed its significance.

This is the biggest secret that Coulson has carried in the series and the reveal will greatly affect how he’s viewed not only by Gonzales’ S.H.I.E.L.D., but also by Coulson’s team. One of the big stories this season has been the shift in Coulson’s attitude, from the season premiere where he’s running secret missions within secret missions to the revelation that he’s kept Deathlok’s covert ops hidden from his team. As the stakes have changed, Coulson’s methods have changed and not everyone will be accepting, even if he’s doing it for the right reasons.

Whoa. Time to go over everything we know about Theta Protocol. What does this mean? Is Coulson starting a fraternity? That would explain the bunk beds that he has been ordering. The first mention of it was right before the team got to the Kree city at mid-season. Coulson asked Sam and Billy Koenig to implement the protocol if things went South. The Koenig brothers did not seem pleased about this. Is Theta Protocol something dangerous, like a way to take threats out or a back-up plan? The only other use of the Greek letter on the series was for the machine that drew out Coulson's wiped Tahiti memories.

Then in last Tuesday's "Melinda" episode, Bobbi Morse and Robert Gonzales' investigation of Coulson uncovered this protocol and they presented information about it to Agent May as evidence that Coulson's secrecy had gotten out of hand. May had never even heard the name before, and neither had Simmons.

The "real S.H.I.E.L.D." had found out that the other S.H.I.E.L.D. Director is moving people and resources around, furthering his consultation with May's ex-husband and superpower psych specialist Dr. Andrew Garner. "Theta Protocol" is what links these activities and they think it has to do with either housing or studying powered people. They also think this is connected to Coulson's continued partnership with Mike "Deathlok" Petersen, which was kept from everyone until recently, including the audience.

One popular fan theory, that was brought to my attention by Tumblr user beyondthesmokingsea and others, is that Theta Protocol is going to become the Avengers Academy. In the comics, the Avengers Academy recruited superpowered individuals (sort of like X-Men) and trained them to become the next generation of Avengers. That's in line with the series thus far, and keeps us on the path to Civil War. The only thing I don't love about this theory is that it would make Phil Coulson the stand-in for Norman Osborn in this storyline. Still, wouldn't it be kind of adorable if after all of this, all Coulson wanted was to open a school?