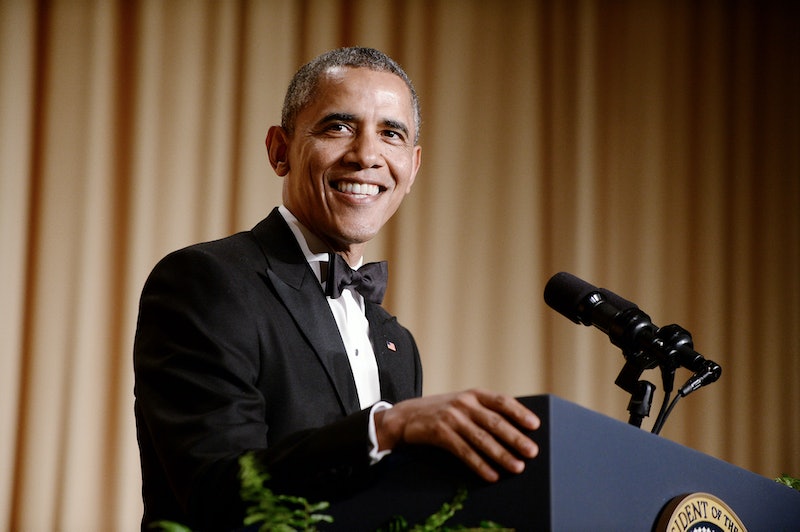 It's almost that time of year again, when Washington D.C. politicos, journalists, and whatever assorted celebrity types nearby get together for some fun and games: the annual White House Correspondents' Dinner. It's going down this weekend, and to get ready for the occasion, why not take a brief jaunt down memory lane? There have been some fun moments, after all, in spite of the times the dinner's sparked controversy — remember President Obama's birther joke at the 2011 dinner?

It got a lot of attention for being, well, outrageously entertaining, though what's often forgotten is that it was just one part of an extended mockery of mogul and reality TV host Donald Trump, who played presidential poser in 2012 and is making noise again in 2016. As part of his bid for political relevance, Trump decided to embrace the birther movement, raising spurious doubts about President Obama's birth certificate and his country of origin. It was a tawdry affair that ended much as you would've expected — a lot of big talk about investigators in Hawaii turning up shocking information, then nothing.

But having already dealt with this kind of conspiracy-mongering for years, Obama didn't let Trump (who attended the dinner, in a very bad decision) off lightly.

Tonight, for the first time, I'm releasing my official birth video. Now, I warn you, no one has seen this footage in 50 years, not even me. But, uh, let's take a look.

Well played, Mr. President. The moment got a lot of coverage, not just for Obama's willingness to make a wry joke at his own expense on such a loaded topic — the entire birther movement, after all, is about as conspiratorially racist as it gets. That being so, however, only amplifies the comedic effect, and Obama cashed this joke in pretty capably. He's always had pretty decent comedic timing, so that wasn't much surprise.

Not to be forgotten, however, is that the Simba gag wasn't even the only joke he made along these lines — he roasted Trump pretty liberally that night, mocking his TV show, his gaudy personal style, his hair (obviously), and comparing him to a moon landing conspiracy theorist. The camera cut to Trump a few times, and while it's a little hard to make out, I'd venture he wasn't enjoying himself very much. It was, basically, delightful.

The 2015 White House Correspondents' Dinner will be taking place Saturday, April 25. I mean, we're due for a few more funny moments like these, because unlike the people in attendance, we don't get delicious meals out of it.