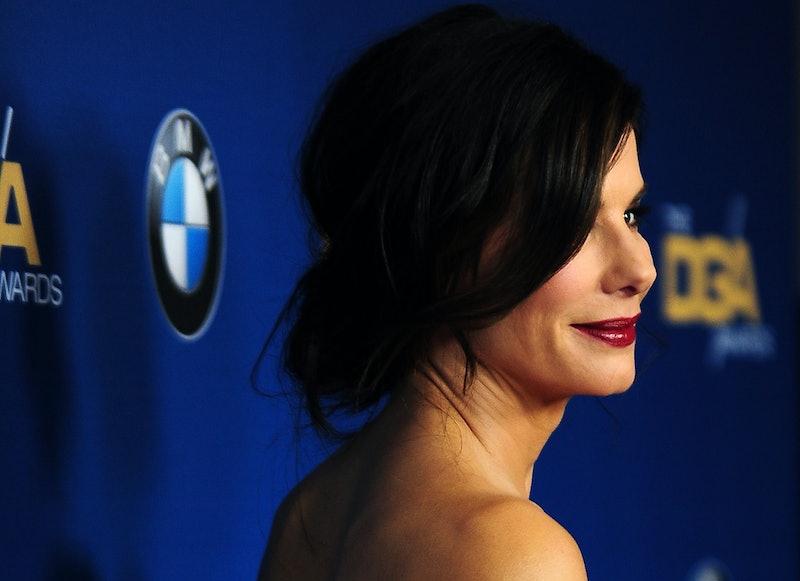 I'm aware that I got into the Sandra Bullock game a little late, but that doesn't mean it doesn't warm my heart to see that the same woman who delighted me in The Proposal is now being recognized for her inner and outer beauty by People Magazine. You see, Bullock is People's World's Most Beautiful Woman for 2015, occupying the position that was taken by Lupita Nyong'o in 2014, and you might be surprised at what her cover interview seems to have decided is her most beautiful trait. While Nyong'o was named People's Most Beautiful due in part to her inspirational words about accepting her own unconventional beauty, Bullock seems to have been given her title because she's a mother. Because of that fact, not despite that fact.

"Real beauty is quiet. Especially in this town, it's just so hard not to say, 'Oh, I need to look like that,'" Bullock explained to People. "No, be a good person, be a good mom, do a good job with the lunch, let someone cut in front of you who looks like they're in a bigger hurry. The people I find most beautiful are the ones who aren't trying." She also added that it was her life with her son who made her feel most beautiful, who "[reminded her] of what's important."

And that is something that strikes me as important in and of itself. Bullock is an award-winning actress with so many great movies — and, okay, some lackluster ones — under her belt. She has survived scary stalker incidents, a messy, public divorce, and even a plane crash. She's one of Hollywood's highest paid actresses, and every time you think that her career is starting to lose its shine she comes right back with something like Gravity to remind us of exactly why she is more than deserving of our respect. On top of all that, she's "America's Sweetheart" — remaining kind and humble throughout all of her success or controversies.

But the thing that she chose to highlight, the thing that she declares is true beauty, is her role as a mother to her son, Louis Bardo Bullock. I've always been of the opinion that mothers really don't get enough credit for everything that they do, which might come as a surprise since there is still the lingering stereotype that feminists hate motherhood and stay-at-home mothers. (News flash: we don't.) I think it's amazing that Bullock considers raising Louis to be her biggest achievement, and even more amazing that People magazine agrees with her enough to make her their cover star. I think that's so important for mothers — current or aspiring — to see as something that makes them beautiful, and to identify as their strength.

And then, of course, the most touching part of the entire interview comes near the end of the People article, where Bullock tells an anecdote about her son that also presents a fantastic new philosophy on aging. "I was putting him to bed and told him that even when I'm old and gray and more wrinkly than I am now, I'll still love him and want to tuck him in," Bullock said. "And he asked why I have wrinkles, and I said, 'Well, I hope some of them are from laughing so much.' And he touched my face and said, 'You're not old, you're just happy.'"

In addition to making me tear up just a little bit, that right there is life inspiration for everyone, whether they're the same age as Bullock, far beyond her age, or far below it. Thinking of wrinkles as proof that she laughed a lot over the course of her life, thinking of age not as "being old" but as "being happy," those are both under-appreciated attitudes in a society so obsessed with looks as evidence of beauty. A society in which ageism continues to run rampant. The fact that People's Most Beautiful cover doesn't focus on Bullock's appearance and, in fact, allowed her a platform to talk warmly about her son, about being a mother, and about her unique views on aging makes this one of the best cover interviews we're likely to see all year.

More like this
Sandra Bullock, Girlboss Extraordinaire
By Matt Harkins & Viviana Olen
Here's How To Practice Self-Love In Small Ways Every Day
By Mackenzie Sylvester
Kendall Jenner Isn’t Ready To Have A Baby Amid Her Mom’s Wishes
By Jake Viswanath
Kim Kardashian Reacts To Kanye West’s Diss Song “Eazy” On 'The Kardashians'
By Jake Viswanath
Get Even More From Bustle — Sign Up For The Newsletter