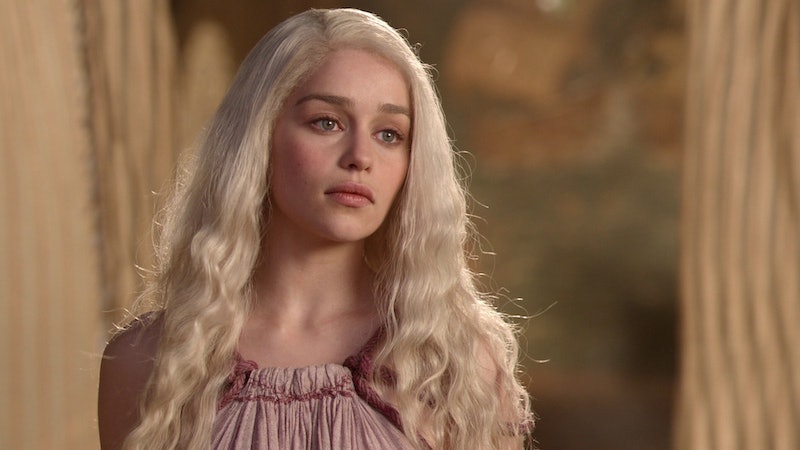 As she grows more powerful (or power-crazy? Please no lady! Think of your father's mistakes!) our favorite Khaleesi and her wayward dragons are set to take over our imaginations, in part, thanks to costume designer, Michele Clapton and embroiderer Michele Carragher. (Seriously what are the chances they both have the same name?!) Daenerys Targeryen's costumes so far have been a visual delight — from their intricate dragonscale-inspired embellishments to their experimental shapes — and have helped to tell the story of this complex and compelling character.

Emilia Clarke, with her Khaleesi-white hair (which is actually a wig!), has probably the most diverse range of costumes on the show — from the wispy silks of an exiled princess to the Hessian heavy Dothraki garb to the queenly gowns in which she is currently costumed. Visually, symbolically, and practically, the HBO costume team has tracked Daenerys' personal journey and story arc through her clothing. As someone who knows that fashion can be powerful — make a statement, tell our stories — it's not difficult to see that Dany's attire is no exception.

So, come on a little tour with me through Daenerys Targaryen's wonderful wardrobe, and follow the journey of a Khaleesi through the medium of fashion!

We meet Daenerys and her sociopathic brother Viserys as banished ex-royalty. Daenerys is firmly under the thumb of her abusive sibling, and nothing but a pawn in his mission to get his family back on the Iron Throne of Westeros.The character's frailty and powerlessness are mirrored in her flimsy garb. The future Khaleesi is presented as a pretty gift in exchange for horselord Khal Drago's powerful Dothraki army; and her position as a sexual object for trade is visually evident. Daenerys' first costume is not dissimilar from those seen at the brothel in Kings Landing in its fabric, color, and cut (which are personally my favorite costumes!), and is easily slipped from her to reveal her naked body in the first scene we meet her.

Her second costume only lightly veils her nakedness as well, showcasing Daenerys as vulnerable, delicate, and exposed. Only the Dragon crest pins of her family heritage, which adorn her shoulders, give the outfit an ounce of toughness. However, I see this slightly as branding Daenerys, or at least presenting her as a trophy bride from a powerful family.

Daenerys gains societal power, which she has yet to use to her advantage, when she weds Drogo and becomes the Dothraki Khaleesi. Her wedding gown is more queenly and structured than her previous pieces, and the fabric opaque. Daenerys' character almost begins to solidify — she is becoming more able to be her own person. However, the soft color, Grecian draped style, and family branding visually connote the uneasiness of her position and her fading, yet still present, vulnerability.

Daenerys' costume then abruptly takes a turn. With her new title as Khaleesi, and her blossoming relationship with Khal Drogo, Michele Clapton clothes the heroine in the traditional garb of the Dothraki people. This is both practical — Daenerys' new nomadic lifestyle doesn't exactly suit princess gowns — and metaphorical. As she becomes more self sufficient and confident, she sheds her high born silks and literally grows a thicker skin. Hessian, leather and natural, course fabrics construct more utilitarian shapes in her costume. This also shows Daenerys' respect for her new people.

After overcoming the tragedy of her beloved husband and unborn child's deaths — as well as the discovery of her magical asbestos skin, the birth of three dragons, and the near death experience of her and her remaining loyal people in the Red Waste — Daenerys rises like a Phoenix into Season 2 in the threads of a queen. Rescued by the leader of Qarth, and allowed into the walled city to safety, she begins to dress in the jewel-like azure of the rich, trader's town. Her costume becomes regal again, but with more strength than her sheer and gauzy Season 1 dresses. Metalwork and leather armor-inspired pieces are layered over her imperial attire, first all cutwork and jewel-like and then resilient and made from leather. The floaty turquoise gowns grow more opaque and finally toughen to more structured dirty violet pieces.

This metamorphosis to Boudicca-like battle wear tracks the Khaleesi's safety and openness in her new environment. At first, as a welcomed queen, she is less aware of her vulnerability. She feels like she can finally relax. As tensions grow higher and all hell breaks loose, her costume reflects her character's resilience and self protection.

Season 3 tracks the Khaleesi's conquering of Slaver's Bay, and her emancipation of the slaves there. Her costume grows ever more structured and takes on an army commander's air, as she gains her troupe of unsullied and sets them free simultaneously. The dramatic hooded cape and deep, vibrant blue have something of the Virgin Mary about them. Her character is seen as a bringer of peace and justice (although she is often quite brutal in the process), and is worshipped, goddess-like as a mother — or "mhysa" in the Ghiscari language of her new people — so the two characters draw more than visual parallels.

Daernerys' wardrobe changes for official engagements, when protected by her entourage and three (quickly growing) dragons, of course. When she is not out freeing slaves and bringing about democracy, she is dressed more elegantly. The pale violet of her Targaryen family name is worn on a gown which is a more grown up take on her earlier princess dresses. However, she wears accessories reminiscent of the belt and collar of her once captive people. Perhaps this is a mark of respect for them?

As Game of Thrones tracks the trials and tribulations of Daenerys' rule across the Narrow Sea, and her loss of control over her wild dragon-children, we see the Khaleesi's attire grow ever more monarchial, and serious. Still simpler than the extravegance worn by the court of Westeros, as, you know, Khaleesi keeps it real!Her elegant minimalistic outfits grow more stately as they overflow with, still subtle but heavy embroideries. Accordion pleated, white paneled skirts give her dresses a more dramatic impact with their contrast. The Mary-esque blue of Season 3 darkens and deepens as her story becomes more serious.

Season 5, thus far at least, has seen a return to the subtle violets of her origins, although they have taken on a dove-like hue. Grecian style drapes and the collar and belt from previous seasons have come full circle also. In her ivory tower, is the Khaleesi growing ever distant from her people? Or do her garments represent the peace she is trying to instill on her still warring citizens, as the Sons of the Harpy cause trouble in their terrifying masks?

In her latest, and in my opinion most controversial, scene in her story so far, Daenerys' gown takes references from the symbol of the dove of peace. The wing-like cape in a subtle tone, made from woven feather-like, textured fabric is most definitely allegorical. As the Khaleesi made the bold move to execute a subject who murdered a member of the Sons of the Harpy — in her honor, but before a fair trial, despite pressure from her people for mercy — she stood, god-like in her dress of purity. Is Daenerys' power getting the better of her? Is she growing less empathetic? Or is she simply demonstrating her idea of justice? We will find out this series, which looks like it will be a big one for the Khaleesi, and through the wonderful work of Clapton and Carragher.