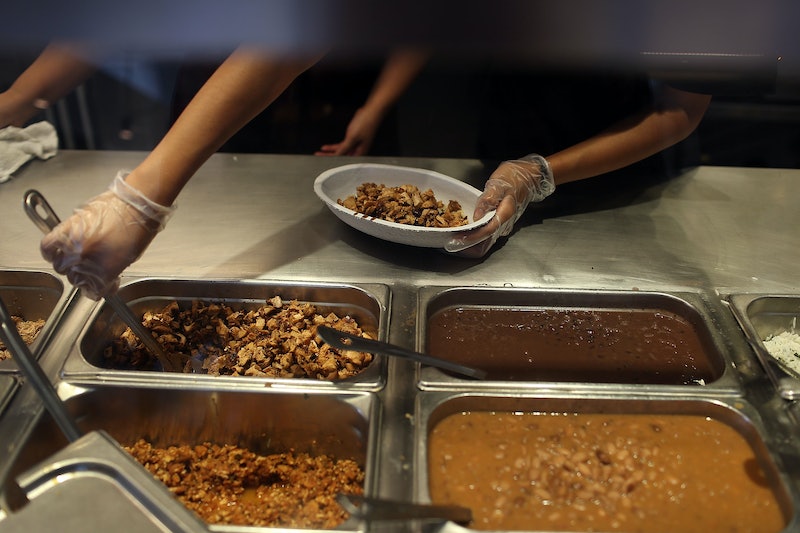 Thanks to underwhelming first-quarter profits, Chipotle reportedly declared Wednesday in a call to investors that your Chipotle burrito is about to get more expensive — and your burrito bowl, and your tacos, and, well, probably anything with meat in it. (Also known as: All that is good and right in the world.) In a devastating announcement allegedly made by CFO John Hartung during a post-Q1 call to investors, Hartung reportedly said that orders involving steak and barbacoa will go up between four and six percent by the end of the year, according to CNN Money. Bustle has reached out to Chipotle for comment.

To put this in perspective, if a steak burrito bowl set you back $7 today, it could cost you about $7.50 by the end of 2015. It's unclear whether the uptick in prices will be restricted solely to steak and barbacoa, or if other menu items will also see an increase: various Chipotle menu items, like tortillas, have been become a little more expensive of late, Slate's Alison Griswold notes.

Meanwhile, Chipotle's Hartung reportedly defended the steak and barbacoa spike by stating to investors that those ingredients cost more to make, and until now the corporation had been losing money on them: "We lose money any time someone comes in and thinks about getting chicken and gets steak instead," Hartung reportedly said, according to CNN Money.

(Which is a pretty smart decision, just FYI.)

So, who can we blame? Well, probably the carnitas suppliers whose untrustworthy practices, according to Chipotle, forced the corporation to enact a widespread, devastating carnitas shortage. Although Hartung reportedly implied during the call that consumers' loyalty would stand the test of rising meat prices, he also noted: "Many [people] have decided to hold out until carnitas returns," suggesting that the company's profits would see an uptick after the carnitas drought passes.

That said, it's unlikely, given the lack of past precedent, that Chipotle will then lower its meat prices back to what they were once carnitas are back and profits (presumably) come roaring back as well. In other words, the uptick in price is probably not temporary.

The corporation's stock slumped by four percent after its earnings report came out Tuesday.

More like this
The Families Of Grenfell Tower Are Still Waiting For Justice, Five Years On
By Bustle UK
Amazon Is Selling A Ton Of These 50 Things That Seem Expensive But Are Cheap AF
By Julie Peck
5 Concrete Ways To Take Action Against The Rwanda Deportation Plan
By Rachel Mantock
Boris Johnson’s Leadership Is In Question – Again
By Bustle UK
Get Even More From Bustle — Sign Up For The Newsletter