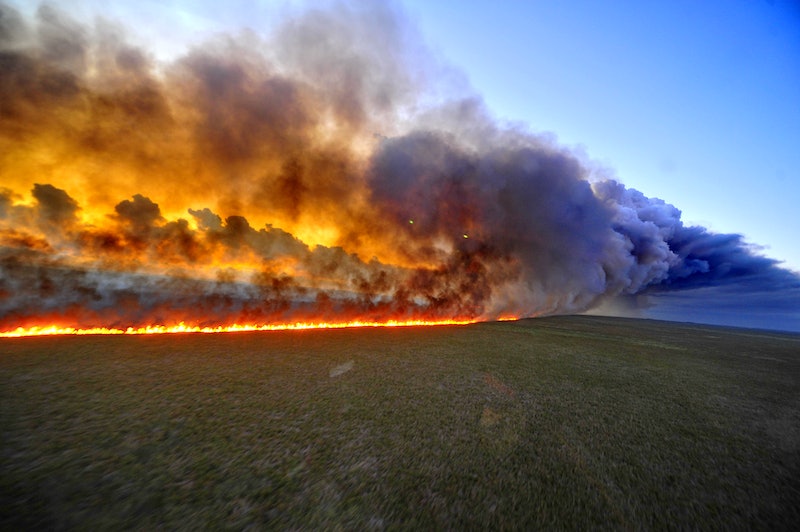 You could say the parallels between the Noah's Ark story and our impending ecological crisis are striking. Our rising oceans, intense droughts afflicting São Paulo and California, global climate-related food instability, and groundwater poisoned by fracking— collectively, these feel like a biblical flood of ecological disasters. And increasingly, environmental debate resembles the Noah story in an even more frightening way: we are already talking about the arks we must build to safeguard our existence.

When talking about the impending ecological catastrophe, many of my friends remain adamant that we needn’t worry— undoubtedly, we'll invent new technologies that will protect us from whatever danger Mother Nature can hurl in our direction. You'd think, living in the 21st century, that we could build some high-tech arks, something that will put Noah’s dinghy to shame. And, in one sense, you're right.

Science is already developing an abundance of miracles to save us from apocalypse — solutions promised to preserve normal society even as sea levels rise, ground water depletes, and summers become unbearably warm. Many of these plans are lumped together by scientists under a rather innocuous name: Geoengineering. Sounds nice, right? We use technology to improve other aspects of our lives; why not the earth itself? Honestly, though, the details of these "geoengineering" plans sound like something from a dystopian sci-fi movie.

One such plan, for example, involves injecting sulfates into the stratosphere. Harvard physicist David Keith noted a while ago that the Earth usually experienced a period of cooling after large-scale volcanic eruptions released large quantities of sulfates which blocked a portion of the sun’s rays from getting to Earth. Keith is now suggesting that we spray aerosols into the stratosphere on a consistent basis in order to mitigate rising global temperatures.

Downsides? According to a Yale report, there would be a few — increased risks of skin cancer, destruction of the ozone layer, and increased acid rain. Oh, blue skies might be a thing of the past.

If that’s not out-there enough for you, consider the plans proposed in 2006 by Roger Angel, an optics expert at the University of Arizona, to orbit mirrors around the Earth. The details of this plan are similar, but instead of blocking light filtering through the stratosphere it aims to prevent portions of the suns rays from ever reaching Earth at all. In order to do this, we would simply launch the mirrors into space, hopefully placing them into orbit at the exact right location so they block 1-2 percent of the suns rays — eliminating some sunlight, but not too much.

If all of this sounds far-fetched, consider that the CIA has already commissioned a government project called Geoengineering Climate: Technical Evaluation and Discussion of Impacts to investigate whether or not ideas like these are viable. Moreover, after the Intergovernmental Panel on Climate Change met in 2007, representatives from the U.S. recommended the following phrase be added to the panel's report:

Modifying solar radiance may be an important strategy if mitigation of emissions fails. Doing the R&D to estimate the consequences of applying such a strategy is important insurance that should be taken out. This is a very important possibility that should be considered.

On a smaller scale, water shortages in California have already prompted building large-scale desalination plants to restore dwindling supplies potable water. NASA projections suggest that California currently has only one year's worth of water reserves, a prediction that presents the real and immediate threat of climate change.

These futuristic plans are attractive for a number of reasons — my inner sci-fi nerd is ecstatic at the sheer thought of gigantic space mirrors — but chief among these is that they “solve” the problems climate change creates without forcing us to do the hard work of changing how our society interacts with nature. Instead of racing to combat the disastrous effects of climate change, let's eliminate the source. Already, there is a growing coalition attempting to persuade public institutions to divest from fossil fuels.

Other groups are pushing for fracking bans across the country. Still others are working to make solar and wind energy more efficient and affordable. These are the kinds of actions that, if pursued, can truly avert some of worst effects of climate change so we can avoid living in a future defined by geoengineering.

Only time will reveal whether or not geoengineering is feasible, but one thing is certain: it would be very expensive. The “get-rid-of-blue-skies” project referenced above, for example, would cost 700 million dollars annually. The water desalination plant currently in construction near San Diego will cost a billion. While wealthy countries can afford these protective measures, impoverished nations can't. Poorer countries may become even more dependent on the “benevolence” of wealthy ones, requiring international aid to maintain a functioning climate. It would give wealthy countries another monumental bargaining chip to advance their national interests abroad.

Many geoengineering “fixes” may alleviate the effects of climate change in some areas, but intensify them in others. For example, a New York Times article by Naomi Klein reports that multiple simulations predicting the effects of injecting sulfates into the stratosphere suggests “mimicking the effects of a volcano would interfere with monsoons in Asia and Africa, potentially threatening water and food security for billions of people.” Since wealthy countries would control the implementation of these technologies, it’s an easy guess which global regions might be forced to sacrifice their ecological safety for the “benefit of humanity” (spoiler alert: it won’t be the rich ones).

Just as most people didn’t make it onto Noah’s Ark, our modern arks would almost assuredly save a small portion of the global population — leaving the remainder to drown in ecological catastrophe.

The Noah's Ark comparison also misses a giant difference between the Noah story and our circumstances: in the Noah story it is God who floods the world, but God did not create our current dilemma — climate change was produced by human actions, most notably the burning of fossil fuels. Moreover, not all global regions are equally responsible. The map below, created by Benjamin Hennig, which scales land mass according to a country's carbon dioxide emissions, reveals climate change is largely the product of gross material consumption in industrialized nations. If we put our faith in techno-miracles, we condemn the large swaths of humanity unable to participate in them — the very groups least responsible for the current crisis.

If the story of Noah can teach us anything about our current situation, it’s that we need to stop putting our faith in arks that so quickly become idols. We must learn that eco-justice and the salvation of humanity won’t look like an ark, in any of its guises. Instead, let’s do the difficult work of changing our culture, and ourselves, so no one gets to pick and choose who is worthy to come aboard the ark.