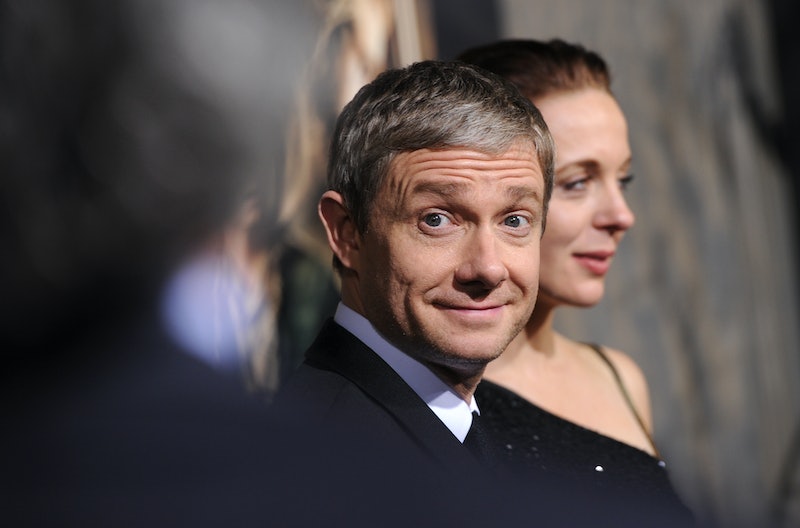 Pop culture nostalgia can be so rewarding sometimes. When the Hitchhiker's Guide to the Galaxy movie came out in 2005, Martin Freeman may not have seemed like the perfect choice for Arthur Dent. He was relatively unknown in the United States, unless you were one of those snobs who insisted The Office could never live up to its original. The dry Douglas Adams adaptation was Freeman's first big screen lead. Since then, his star has blown up so much that nobody was surprised when he landed the role of Bilbo Baggins — yet maybe that's because Martin Freeman always plays the same character. His roles are so similar, in fact, that they Saturday Night Live's parody of The Office and The Hobbit was able to seamlessly mash two of them up for one hilarious sketch.

I'm not saying that Martin Freeman is a bad actor. I'm not saying he plays himself either — though Freeman's real-life partner did play his wife on Sherlock. It's natural for artists to be drawn to common themes and similarities in the stories they want to tell. Freeman often plays the comedic "straight man" in a room full of crazies, and that's valuable. How else are we to know that crazy's not normal in that world?

His characters are not without their differences but they're almost always bumbling, awkward, and in some way miserable. Therefore, let's celebrate what makes a Martin Freeman signature character in honor of the ultimate every-Brit, Arthur Dent.

Tim, the original Jim, was bumbling, awkward, and always miserable at work. Will Tim and Dawn? Won't Tim and Dawn? Since the BBC series was much shorter than our side of the pond's version on NBC, the tension and misery for Freeman's character was much higher.

John Watson is bumbling, awkward, and always seems miserable at work with Sherlock Holmes even if he's secretly loving every second. Most of the fun in the BBC series is watching Sherlock slowly torture his companion with his genius antics.

Bilbo Baggins is a thief and hero first but a bumbling, awkward, miserable hobbit always. He spends a decent part of Peter Jackson's Middle Earth prequel trilogy complaining and wishing he were back at Bag End in the Shire.

Lester Nargaard is a bumbling, awkward, miserable man from Minnesota who finally snapped. This is, without a doubt, the most interesting twist on what we've come to expect from Freeman, and the role earned him a Golden Globe nomination.

This is the role in which many of us mainstream American movie goers first encountered Freeman — as a bumbling, awkward, miserably in love, naked stand-in.

Hitchhiker's Guide To The Galaxy

Here we have it. Arthur Dent, protagonist of Hitchhiker's Guide . Bumbling as any good British leading man should. As awkward as you could expect someone who's planet has just been demolished. Miserable that he's still wearing a bathrobe on his inter-galactic adventure and could never get the hang of Thursdays. The role that, ten years ago, we had no idea Martin Freeman was born to play.