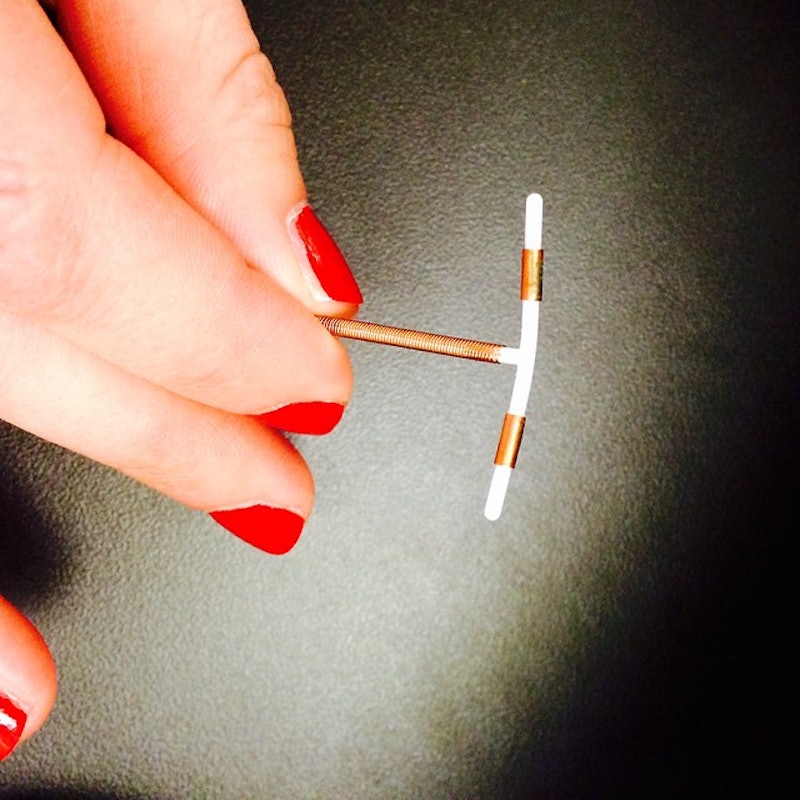 If you read women's websites, keep up on women's health, or just talk to other ladies about their vajingular habits, I'm sure you've heard a lot recently about the rising popularity of the intrauterine device and wondered if you should get an IUD. After years of living in the shadow of its flashier sister the Pill, the IUD is finally having its day in the sun — it's 99 percent effective against pregnancy; it's been recommended by the American Academy of Pediatrics as the best form of birth control for young women; it's basically received every accolade short of the Academy Award for Best Original Song. Everybody seems to be crazy for IUDs these days — but does that mean that they're the right birth control for you?

Though you'll want to speak to your doctor and investigate further before getting anything professionally inserted into your hooha, the 10 questions below can help you figure out if the IUD might be right for you — or if you should stick with another form of birth control, like condoms, or never replying to any messages on Tinder.

1. Do you want lighter periods?

IUDs come in two varieties — copper IUDs, like Paragard, and hormonal IUDs, like Mirena and Skyla. All three work by making the uterus an environment where sperm can't survive — so basically, they turn your babymaker into the sperm equivalent of Cormac McCarthy's The Road. Hormonal IUDs also thicken the cervical mucus, which makes it harder for sperm to enter the uterus to begin with.

Mirena and Skyla are known for lightening users' periods — hormonal IUDs are known for lightening women's periods by 90 percent on average, and in fact, some women using Mirena report having no periods at all. But it's not an instant trip to No Period City — most users of hormonal IUDs experience spotting for up to six months after insertion, and still feel PMS-type side effects, like breast pain, in that time period as well.

Copper IUDs are known to give users heavier periods, at least for the first few months after insertion.

Many women have noted that the copper IUD can worsen period cramps — though some scientific studies of menstrual cramps have disputed this, so feel free to do your own research. I was just trying to have some real talk about utes here, I don't need this to turn into a fight!

Everyone seems to agree that hormonal IUDs usually lessen cramps, for the same reasons that birth control pills do.

3. Do you often forget to take your Pill?

Here's where the IUD really earns its superstar status — once it is inserted, you basically don't have to think about it at all for several years. Imagine all the stuff you could do with that free time! Get into model shipbuilding! Learn to knit! Start a band for fun, get famous way too fast, scream "It used to be about the music, man!" to each other, and break up! The possibilities are genuinely limitless.

4. Do you have an untreated STI?

If you're too freaked out to get an STI test, 1. stop that right now! There are really effective treatments for almost every STI these days and you're just being a big baby; and 2. you can't get an IUD, because you need a clean bill of vaginal health to get one inserted.

If you get an IUD inserted while you have an untreated STI a-brewin', it can majorly increase your risk of pelvic infection during and after the procedure (which is otherwise quite low). Your doctor should give you an STI test before insertion, but if they don't make a move to give you one on their own, make sure that you request one — it's super important and not that scary, I swear.

5. Do you have uterine fibroids?

Trick question! Many people believe that women with uterine fibroids can't use IUDs, but this is simply not true. A 2010 study found that hormonal IUDs were effective birth control for women with fibroids, and did not irritate their fibroids or lead to increased bleeding during their periods. So rock on, my fibroidial sisters, and use whatever form of birth control you please.

6. Will your insurance cover your IUD?

In our brave new post-Affordable Care Act world, all IUDs are theoretically free. "Theoretically" is the operative word here. Because while the ACA requires that all insurance companies cover at least one model of IUD, they don't require them to cover every single model of IUD — so your company may only cover hormonal when you want copper, or vice versa.

So make sure that your insurance company covers your preferred model before you set up an appointment with your gyno —and if it doesn't, talk to your gyno about getting a "waiver" for your insurance plan to cover the model that you want.

And if you really can't swing any way to get your preferred method covered by your insurance, it's worth thinking about paying for it out of pocket. It's going to be up in your biz for years, so you should make sure that it's the IUD you really want.

7. Are you planning to get pregnant in the next six to 12 months?

There's no rule that says that you can't get an IUD inserted tomorrow and then taken out two months later because you came down with a mean case of baby rabies, of course — your ability to get pregnant does return just one day after your IUD is removed. But since getting one inserted can be a little bit of a production, this may be a method to skip if you're gonna fire up ye olde baby-kiln in the near future.

But if you have no plans to create a tiny person any time soon, IUDs offer some great literal bang for your buck — copper IUDs often work for 10 years, and hormonal ones last for three to five years.

8. Do you want to stay away from hormonal birth control?

If you want to steer clear of hormones, you can still get an IUD — the copper IUD is one of the most effective non hormonal birth control methods out there. But be aware that when folks are talking about IUD benefits like lighter periods, they are talking specifically about the models that release hormones. Copper ones won't offer any fringe benefits — they'll just keep the tumbleweeds rolling through your uterus.

9. Are you able to go two weeks without having unprotected sex?

Though you can have sex soon after the insertion of your IUD, you aren't supposed to have unsafe sex for two weeks following the insertion — because during this time period, your risks of any STI turning into a pelvic infection are high. It's obviously your call in the end — if you are 100 percent monogamous, 100 percent confident that your partner is monogamous, and 100 percent sure of both of your STI statuses, then do what you feel. But if you can imagine this being a problem for you, keep it in mind — pelvic infections are no joke, friend.

10. Are you very sensitive to pain?

Doctors describe the pain of the IUD insertion process as nothing remarkable, comparable to a Pap smear or a "pinch." But doctors have also probably spent an entire morning helping someone remove a turkey drumstick that has become lodged in their bathing suit area, so a doctor's standards of what is and isn't tolerable or normal might be different from your own.

Many women describe the insertion procedure as very painful — one woman speaking to Cosmopolitan described her IUD insertion procedure as the "most painful minutes of my life," and many have described hours of debilitating cramps following the insertion. Many women feel that the pain was ultimately worth it to have years of effective, ready-to-rock birth control, and you might, too — but if you're extremely sensitive to pain, it's worth taking into consideration.

So what should you do? Don't ask me, man; I'm just some computer code that has achieved enough sentience to think about women's health issues. But remember that when choosing your birth control, you don't have to make decisions based on fears — the facts are out there, just waiting for you to find them. But you don't have to choose a form of birth control just because it's trendy, either — I mean, if everyone's vagina was jumping off the Brooklyn Bridge, would yours? Assess your own unique needs, and make the best choice for you. You do you(terus).

More like this
Young People Are Still Experiencing Period Poverty In UK Schools
By Sophie McEvoy
How To Do The Intimacy-Boosting Lotus Sex Position
By Laken Howard and Lexi Inks
Hinge's New NFAQ Feature Is Demystifying Queer Dating
By Emma Carey
The Best Time To Date After A Breakup, According To Experts
By Bustle Editors
Get Even More From Bustle — Sign Up For The Newsletter