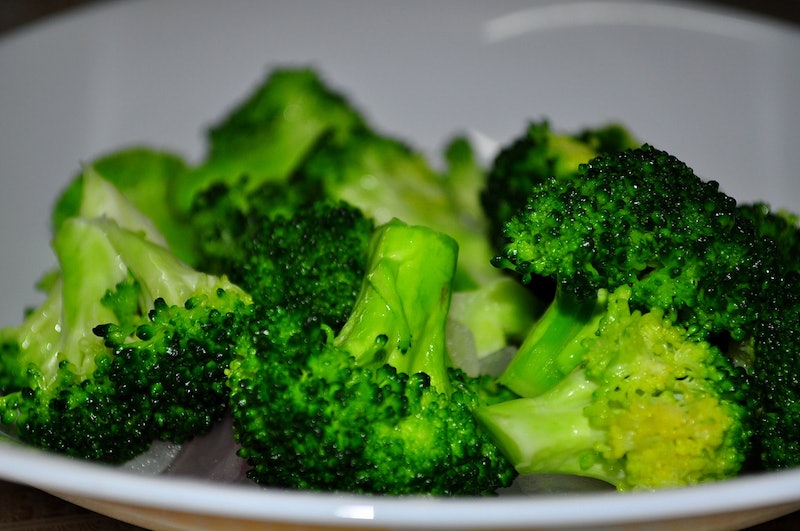 If you're a parent, odds are you've had to fight with your kids about eating their food at some point. But the reasons small children in particular give for not wanting to finish their Cheerios don't always make a whole lot of sense — which is exactly what the Instagram and Facebook campaign #MyKidCantEatThis gets at. Both hilarious and familiar, it showcases some of the more creative excuses kids have given their tech-savvy parents about just why they won't eat that string cheese you just gave them. I mean, you opened it for them already. Clearly they can't eat it now, right?

According to the Huffington Post, #MyKidCantEatThis was created by a mother of three named Heather. “The reasons my kids can't eat foods range from hilarious, infuriating to ridiculous,” she noted in an interview. “They know they have to taste all foods and are all healthy, so while I'm not seriously worried, it still drives me crazy!”

Since Heather knows she's far from the only parent who has ever had to put up with this problem, she created the hashtag #MyKidCantEatThis, along with an Instagram account and a Facebook page, to give parents all over the Internet a place to gather, commiserate, and laugh. I'm not a parent right now, so thankfully, these sorts of struggles are things I don't have to deal with yet — but you know what? #MyKidCantEatThis is still funny to me. Why? Because it's relateable no matter how old or young you are.

It's worth noting, of course, that there are totally legit reasons why a kid may not be able to eat something: Allergies and other dietary restrictions are real things. My brother and I were both lactose intolerant when we were kids; although it got less severe for me as I got older (it's why I was able to eat that cheese-loaded ghost pepper sandwich the other day), we did both still have to be careful of what we ate for a number of years. Sometimes, though? We also gave stupid reasons as to why we didn't want to eat something, because that's just what little kids do. You can work on expanding their palate, but when everything is still relatively new, there's inevitably going to be a lot of kickback. It's just the way of the world.

Even though it's frustrating to deal with, though, it's also kind of funny. Here are some of the magnificently creative reasons the children of #MyKidCantEaTthis have cited for their picky habits:

The Right Utensil Is Not Available:

An artist cannot work without his or her tools!

The wrapper. It's different. I don't trust it.

They're The Wrong Ones:

I don't care if these are the only peaches we have. I want the other peaches. It makes perfect sense.

Surely you don't expect me to eat broken bread, do you?

I Changed My Mind:

Yesterday I liked it. Now I don't. It's all quite simple, really.

The Chocolate Chips Are In The Wrong Place:

It's a very important distinction.

And you know what? We all said things like this when we were small, and anyone who says they didn't is probably lying. I mean, don't get me wrong — my parents made damn sure we ate healthily; that we at least tried everything on our plates, even if we ultimately decided we didn't like it; and that if we were out at a restaurant, we would find something palatable on the menu because it was unreasonable to expect every single restaurant in the world to have chicken fingers. I think these family food policies stood me in good stead as I got older; cooking is one of my favorite things, and I'll try pretty much anything at least once. My favorite thing to do when traveling in a country in which I don't speak the language is to go to a random restaurant, point at something on the menu, and find out what it is when it arrives.

But that doesn't erase the fact that, if #MyKidCantEatThis had been around back in the late '80s, my own parents' submissions probably would have looked something like this:

#Mykidcanteatthis because it's not apple juice.

Until I was about five, the only juice I would touch was apple juice.

#Mykidcanteatthis because it's not pink grapefruit juice.

Later on, the only juice I liked was pink grapefruit juice.

#Mykidcanteatthis because it's not covered in (soy) cheese.

I'm still not wild about broccoli, but I'll eat it if I have to.

#Mykidcanteatthis because it's not soup yet.

#Mykidcanteatthis because the only good part of the bagel is the inside.

I ate my bagels with a grapefruit spoon when I was a kid so I could more efficiently scoop out the soft center. I'm not kidding. I generally disliked toasted things because they were too hard or dry; I didn't like regular toast, either. I have since seen the error of my ways, though. Toast is the best.

See more hilarious reasons kids give for why they won't eat their bagels, or cereal, or pizza, or veggies, or whatever over at @MyKidCantEatThis on Instagram. Also, let's all go thank our parents for putting up with our absurd eating habits for so many years. They deserve it.