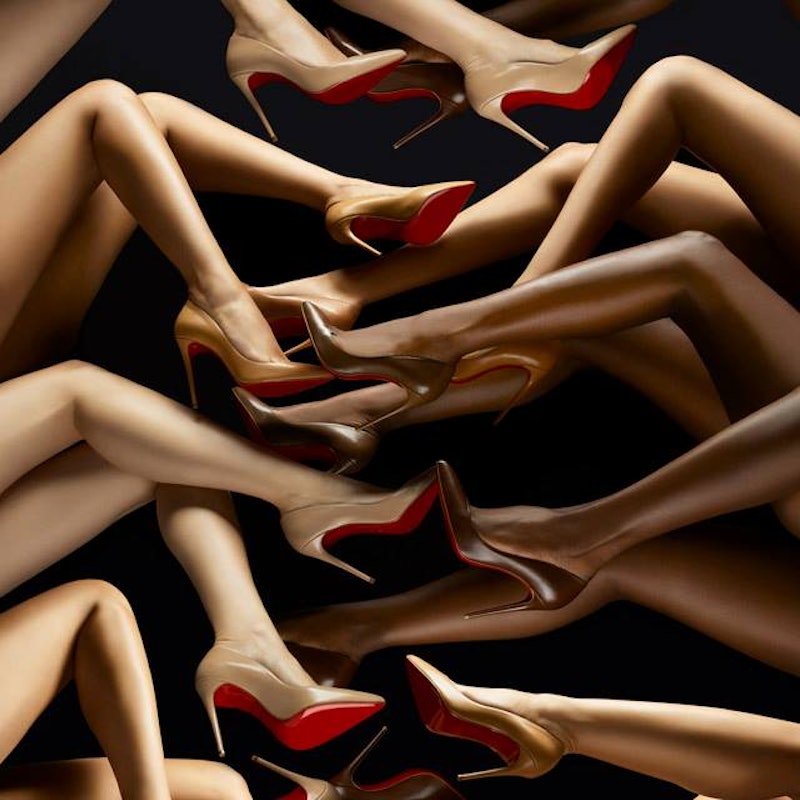 First emojis, now pumps. It looks like the world is starting to acknowledge the fact that "nude" colors aren't everyone's skin tone, even high-fashion brands. Yesterday, Christian Louboutin's new nude heel collection was unveiled at an event at Bergdorf Goodman, and it doesn't just feature the varying shades of peach that we're used to in the shoe department.

In an effort to match more of his fans' complexions, Louboutin unveiled five different shades of his classic shoe, ranging from light to dark. He's not stopping there, though: “There are two colors that I'm missing the range of in the middle. In the next year, we will be at seven total skin tones," he says.

Since the point of a nude heel is to elongate the legs by creating an optical illusion of sorts, it doesn't really have the same effect if the skin tone and the color of the heel are starkly different. By introducing new shades of his luxury footwear, Louboutin is giving women who don't match up with the typical "nude" heel a chance to work those gams like a supermodel.

The nail polish game is also getting in on the acceptance of skin tone diversity: earlier this month, NCLA introduced a range of tan shades to match the hands of a much wider range of ladies.

It seems like this should have happened a long time ago, and hopefully the concept will expand to other shoe lines as well. Hey, what Louboutin is doing is fantastic, but how about a pair that won't set you back about $700?

More like this
42 Black Owned Fashion & Beauty Brands To Support Today & Always
By Mekita Rivas, Shea Simmons, Kui Mwai and Dominique Norman
All Of 2023's Biggest Nail Art Trends, According To Top Manicurists
By Jordan Murray
J.Lo's Micro-French Manicure Has A Fun, Sparkly Twist
By Olivia Rose Rushing
This Week’s New Makeup Releases & More Beauty Headlines
By Audrey Noble and Erin Stovall
Get Even More From Bustle — Sign Up For The Newsletter
From hair trends to relationship advice, our daily newsletter has everything you need to sound like a person who’s on TikTok, even if you aren’t.