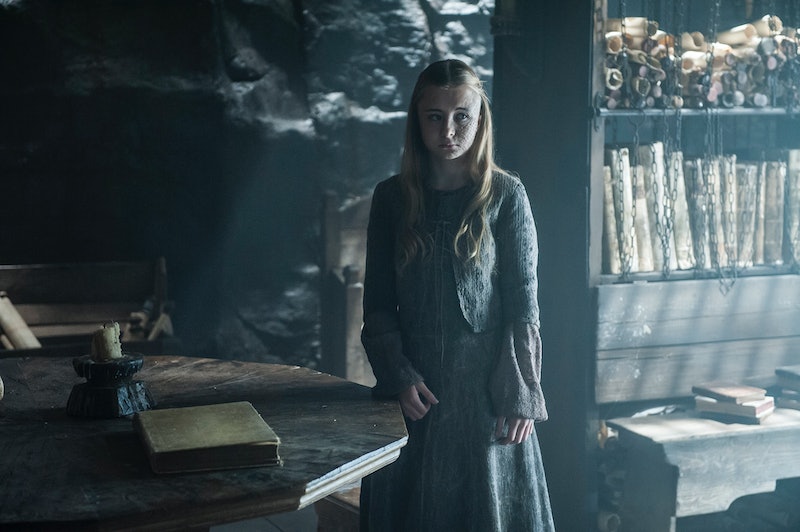 In case casual fans (aka non-book-readers) forgot the exact minutiae of what happened to that poor girl's face, the most recent episode of Game Of Thrones devoted an entire scene to a discussion on greyscale, the mysterious disease that left little Shireen permanently scarred. The daughter of Stannis Baratheon was afflicted with the illness when she was very young, but she survived. Greyscale is always fatal in adults, but can be survived by children — it's sorta like Westerosi chicken pox that way. In fatal cases, the disease spreads across the entire body, leaving the skin cracked and grey, until the person has essentially turned into stone. But what exactly is greyscale on Game of Thrones, and why are we being reminded of it now?

During the scene between Shireen, Sam, and Gilly, the wildling girl revealed that they have greyscale north of the Wall as well; in fact, two of Gilly's sisters contracted the disease and died horrible deaths. This backstory is a new addition to the show, but it may have taken the place of another wildling subplot that's been cut. In George R.R. Martin's books, Mance Rayder had a wife named Dalla, who had a sister named Val. Although Dalla died in childbirth, Stannis assumed that Val's proximity to the King Beyond The Wall made her something of wildling royalty and kept her as a hostage.

Val is generally cool and collected and actually kind of an awesome character — but she freaks out when she learns there's a girl in Castle Black afflicted with greyscale:

"And the daughter... her face...""Greyscale.""The grey death is what we call it.""It is not always mortal in children.""North of the wall it is. Hemlock is a sure cure, but a pillow or a blade will work as well. If I had given birth to that poor child, I would have given her the gift of mercy long ago." [...]"The maesters say greyscale is not—""The maesters may believe what they wish. Ask a woods witch if you would know the truth. The grey death sleeps, only to wake again. The child is not clean""She seems a sweet girl. You cannot know—""I can. You know nothing, Jon Snow." Val seized his arm. "I want the monster out of there. Him and his wet nurses. You cannot leave them in the same tower as the dead girl."Jon shook her hand away. "She is not dead.""She is. Her mother cannot see it. Nor you it, it seems. Yet death is there."

These are some pretty serious words. And Shireen isn't the only time we encounter greyscale in Martin's novels. At one point while Tyrion is journeying through Essos to meet Daenerys, he finds himself on a boat traveling down the Rhoyne. He and his companions, including exiled Westerosi lord Jon Connington, pass through a stretch of the river referred to as the Sorrows, which is rumored to be the home of a mythical breed known as the stone men — men in the late stages of greyscale, reduced to mindless monsters. Sure enough, Tyrion & Co. are attacked by the stone men, who drag the Imp into the river before he's rescued by Jon Connington. Miraculously, Tyrion doesn't contract the contagious disease... but Connington does, which the lord realizes shortly after returning to Westeros.

On the show, Tyrion's journey through Essos has been significantly changed — which probably means no Sorrows or stone men — and Jon Connington nor Val exist. So the writers will have to throw all of their greyscaled eggs into one basket with Shireen. But what is the endgame here? Why did Martin invent the disease, and why did he pull such focus to it in A Dance With Dragons?

There are plenty of theories and very few concrete answers. It's possible that Val's intense reaction to it is simply supposed to illustrate the cultural differences between wildlings and Westerosi, nothing more. It could be that Connington's affliction only serves to put a ticking clock on the dying man's plans and serves no larger purpose. But there are some readers who theorize that Martin is leading up to a widespread plague that will be unleashed upon Westeros, brought over from Essos by Connington and devastating the war-ravaged continent.

There is some merit to this idea — even on the show, despite all elimination of Connington and the stone men. Thrones creators David Benioff and D.B. Weiss have all but announced that the show will end after Season 7, and therefore they're all about convergence at this point, in defiance of Martin's ever-sprawling tendencies. Why would they bring up greyscale again this late in the game, especially in such a blatant manner, if it wasn't going to be important to the story's endgame?

It's interesting to note the parallels between greyscale victims and the resurrected corpses created by the White Walkers, called wights: both are strongly associated with death, both become brainless automatons, and both seek to harm other humans. Could greyscale actually be related to the White Walkers in some way? If so, what does that mean for Shireen? Will this innocent little girl — one of the only people alive to have survived the blight — somehow be able to tip the scales between good and evil, light and dark, ice and fire? If so, in which direction will she tip them?

Again, there are very few answers at this point in time... but Shireen Baratheon is definitely a character we should all be keeping our eyes on.