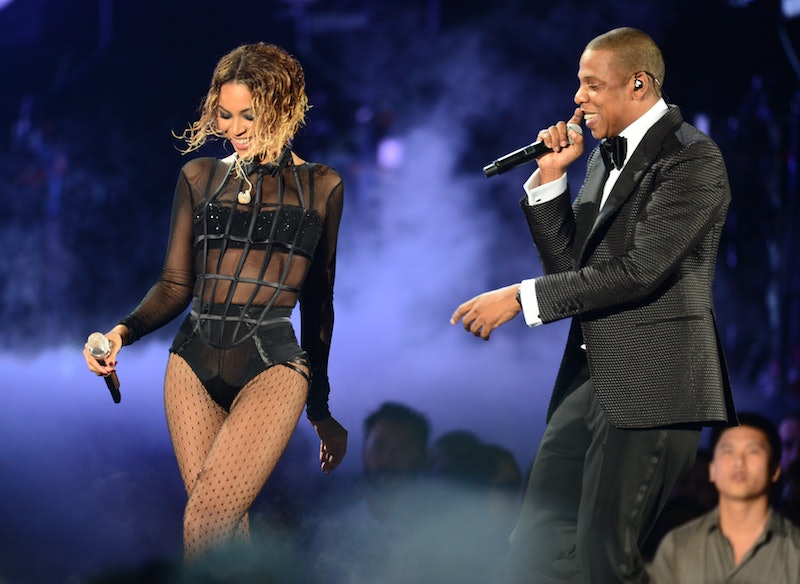 If the rumors are true, it looks like we will be getting a joint Beyoncé and Jay Z album before the end of the year. After their uber-successful $100 million dollar On the Run tour and HBO special last year, the album could not come at a better time for the duo. However, some fans might be disappointed to hear the current rumor that Beyoncé and Jay Z's joint album will be released to TIDAL before it comes anywhere else — especially since the streaming site isn't exactly a roaring success so far.

In March, Jay Z announced his new streaming service TIDAL with a lot of hoopla and fanfare. The world watched as musical icons like Nicki Minaj, Madonna, Kanye West, and Rihanna signed a manifesto in support of the paid service. Jay Z purchased TIDAL for a whopping $56 million dollars. He hoped to create a fairer streaming service for artists who are only getting paid pennies in royalties when their songs are streamed on other services like Pandora and Spotify. Jay Z spoke with Billboard about the project saying,

"We didn’t like the direction music was going and thought maybe we could get in and strike an honest blow and if, you know, the very least we did was make people wake up and try to improve the free vs. paid system, and promote fair trade, then it would be a win for us anyway."

Since TIDAL premiered several artists have released exclusive content on the service. Jay Z released a video for his song "Glory," and Beyoncé released a new single "Die For You". Despite access to these special releases, it doesn't look like the public is willing to shell out a monthly sum of $9.99 for the standards audio service and certainly not $19.99 for the premium version. The CEO was replaced just shortly after its botched launch, and Billboard has reported that TIDAL dropped out of the top 750 in the Apple's App store. It would make sense then for the Jay and Bey's joint effort to go on the streaming service in an effort to revive it.

However, will the album be enough to save TIDAL? I'm sure there will be tons of people who will happily throw down their $9.99 (at least for the first month) for access to the album, but I doubt the service will be able to sustain a large number of their consumers for an extended period of time. While I was happy to spend way too much money to see the King and Queen in concert, I rarely buy albums. The music industry has changed so rapidly in the last few decades, and it's commendable that artists are trying to find a way to be paid fairly for their art. Even though I'm thrilled about a joint Jay Z and Beyoncé album, I will still be content to stream it on Spotify or some other free service. Looking at the data and the numbers, it looks like the majority of the public share that same sentiment.