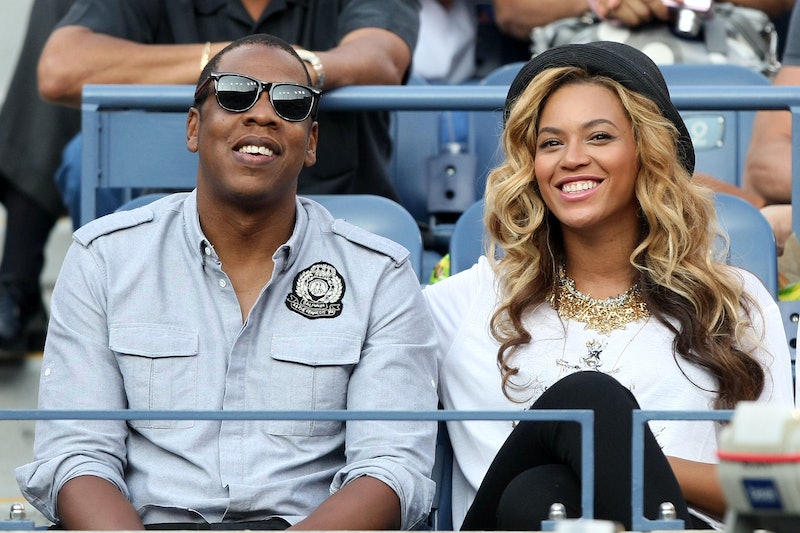 What's next in the future of Jay Z and Beyoncé, aka America's golden couple? Well, that depends on who you're asking. While Beyoncé is busy vacationing and posting pictures of her trip to Instagram, rumors are intensifying that she's got something a little more impressive coming up. Page Six has rekindled the news that Beyoncé and Jay Z are working on a joint album following their On the Run tour, and I can't tell you how exciting that is. It's like going to see the On the Run tour, except ten times cheaper and with the possibility of new music. (I'm already hoping Bey and Jay's joint album features Blue Ivy on another track, but that could just be me.)

However, there's still no word on whether this alleged album is coming out at the end of this year or at the start of next year. Not to mention we don't know if it's just a collection of their songs as performed during On the Run or if it's all new music we're getting. Personally, I choose to believe the latter. After all, they've had so much material to work with in the last year alone. In fact, I can already guess at what their track list is going to look like and what their songs will be about. You know, if they write them all themselves.

This sultry ballad will include at least one line remarking how much money Jay Z and Beyoncé make every time they're a headline and several allusions to all the sex they were having while we were busy wondering when they were going to split. All very subtle, of course.

In a song that will make you wonder if Jay Z and Beyoncé really do run the illuminati, they'll outline their plans for world domination starting with their secret police of Beyoncé fans who you won't see coming until you're already doomed.

Featuring a sample of Nancy Sinatra's "Bang Bang" as sung by Beyoncé, Jay Z will rap the majority of this track and discuss at length all the many (metaphorical) bullets he's put in every obstacle in his path to stardom. But more importantly, Beyoncé will be singing a cover of Nancy Sinatra's version of "Bang Bang."

Beyoncé and Jay Z are rumored to be looking at houses in Paris, so who's to say they weren't pulling a Jay Z and Kanye West by planning to work on material for their album there? French dialogue in this song is optional, but probably won't be translated to a speech about sexual freedom as in "Partition." Probably.

No Beyoncé album would be complete without a feminist anthem, and that's what this track would be all about. How being two halves of a whole doesn't make you any less of an independent woman. How love builds you up instead of making you weaker. How solid she and Jay Z are. You know, the usual.

Harvard might be teaching a class on Beyoncé, but if you want true life lessons from the Queen then this is your track. I'm already anticipating a music video of Beyoncé dressed like a professor and laying some real talk on a room full of students while Jay Z flits in and out to rap some soul truths of his own.

I'm not saying that Beyoncé and Jay Z are going to respond to alleged mistress Liv's music video on their joint album, but I am saying that there might be at least one song devoted to haters and people disrespecting relationships. No names named, of course. They're too classy for that.

Sorry, Kim Kardashian and Kanye West, but Bey and Jay had better things to do than be at your wedding. Like write this song about how it took 45 minutes to get all dressed up, but they ain't even gonna make it to that club. Wait, that was "Partition" again. Nevermind then.

If you think there's such a thing as overplaying "Flawless," then you are totally mistaken. If she can do a remix with Nicki Minaj, then she can definitely do a remix with Jay Z. In fact, why not do a remix with both? That chorus was meant to have a Jay Z rap verse around it, please and thank you.

Remember when Beyoncé wrote that poem? Now it's available in musical form. You're welcome.

Blue Ivy Carter will be dropping her first solo track on this collaborative album, launching herself to superstardom in a single-two minute melody. So, um, can this album be in my hands now already?

More like this
Everything To Know About The 2023 Grammy Awards
By Jake Viswanath
Beyoncé & Blue Ivy Performed A "Brown Skin Girl" Duet At Her Private Dubai Concert
By Brad Witter
Zach Gilford Admits He Forgot Taylor Swift's Name When He Starred In Her Music Video
By Jake Viswanath
Twitter Can’t Believe The Madonna Biopic Is Scrapped & Fans Have A Solution
By Alyssa Lapid
Get Even More From Bustle — Sign Up For The Newsletter
From hair trends to relationship advice, our daily newsletter has everything you need to sound like a person who’s on TikTok, even if you aren’t.