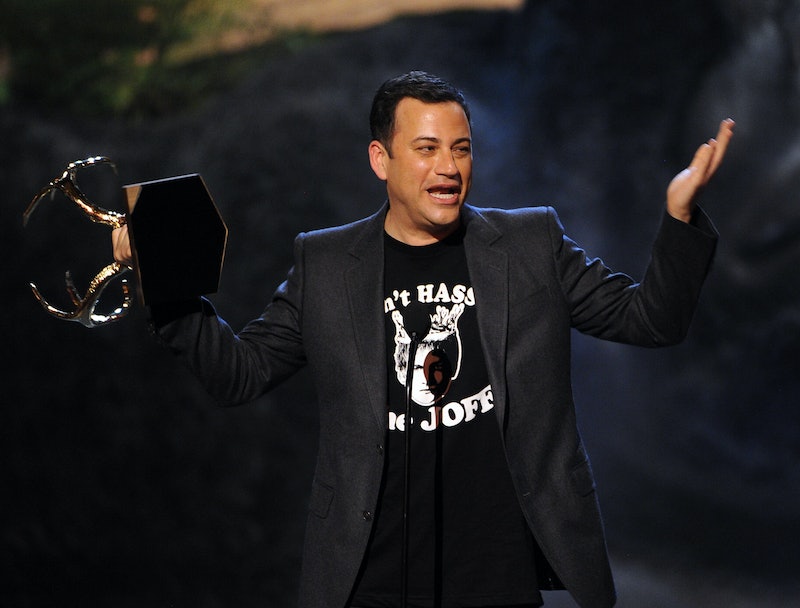 UGH, Jimmy Kimmel. How can I scorn someone so much when I don't even watch their show? Oh, because of shit like this: Kimmel sat down for one of his favorite segments, Kids Table. In the Oct. 16 piece, the kids were dressed in suits discussing solutions to the debt the U.S. owes China and one little boy offered: "Kill all the people in China!" Wow, how charming. Kimmel replied, "That's an interesting idea." Is it, Jimbo?

Kimmel loves to chat with kids, cause they just say the darndest things! Like this racist crap, without even knowing it! Can we hold these little children responsible? No, because look at them. But it's Kimmel's responsibility not to air that kind of content on his show, over which he has creative control. ABC pulled the clip from YouTube upon protests from the Chinese-American community, and issued a formal apology:

The skit didn't cause much of a ripple initially, but Chinese-Americans were unhappy, and over 65,000 signed a White House petition calling for an investigation that likened the language used on "Live" to Nazi Germany's attack on Jews. On Monday, protesters convened outside ABC's San Francisco offices (Time magazine reported a little over 100 people were present). Some carried pictures of Kimmel's face with a Hitler mustache superimposed.)

In ABC's "sorry you were offended" apology, they said, "We would never purposefully broadcast anything to upset the Chinese community, Asian community, anyone of Chinese descent or any community at large."

Hmm. Let's just crown Kimmel the king of the Backtrack Kingdom. This is his second strike this month — earlier in October, he aired a spoof of Kanye West's interview on the BBC featuring a child as Yeezy. The "light-hearted spoof" incited rage from West, who launched a Twitter invective against the talk show host, and later appeared on Kimmel's show to "clear the air." Honestly, kudos to Kanye for even entertaining Kimmel's measly attempt at an olive branch.

During the interview, Kimmel stupidly admits that he didn't even watch West's interview on the BBC. Of course, many people of color responded to the infantilization of West by Kimmel (and the media in general, who called West's warranted angry response a 'rant'), but Ayesha A. Siddiqi put it best in less than 140 characters:

Bottom line is, I am sick of Kimmel's crap. How long can he keep tripping up and having someone apologize for him? I know Matt Damon was just goofing and continuing his fake feud with Kimmel last night when he took over the show and renamed it Jimmy Kimmel Sucks, but honestly, that's a way more accurate name.