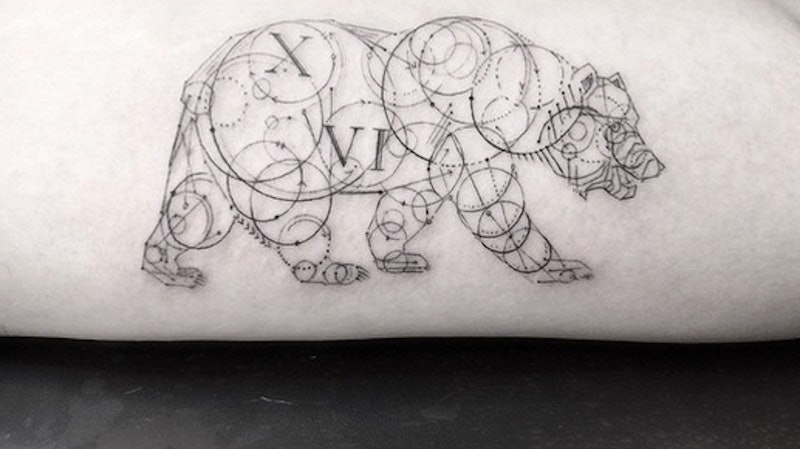 It's totally normal, if not expected, to let your interests wander as a child when it comes to extracurricular activities. A lot of us found hobbies and dropped them just as fast, much to our parents' dismay. LA artist Brian Woo called it quits with violin around age 13, but in his case, it turned out to be a blessing in disguise: He swapped the woodwind for ink and needles, and now Dr. Woo makes geometric animal tattoos that look pretty much perfect.

Shortly after he first started experimenting with rudimentary tools and concepts, he began an apprenticeship with Hollywood ink shop Shamrock Social Club. Woo studied under Shamrock's owner, Mr. Mahoney, and some other artists employed at the shop. The shop boasts a roster of regulars including Rihanna, Drake (yes, his Emoji tat), and others, many of whom specially request Woo.

Woo developed his nickname during his three-year apprenticeship. Apparently dubbed Dr. Woo by a regular, it seems to be an homage to the medical future Woo's dad always wanted for him. Instead, Woo chased his own dream: to be covered and cover others in beautiful works of art. He developed his own geometric-heavy style over time, eventually perfecting what fans call Woo arrows , which are made up by a series of impossibly tiny dots.

Sheesh. I definitely wanna book an appointment with him. Anyone else in with me? Scope some of his other work below:

And now for a shot of him with his kid, in case you needed an excuse to make your heart explode this afternoon: