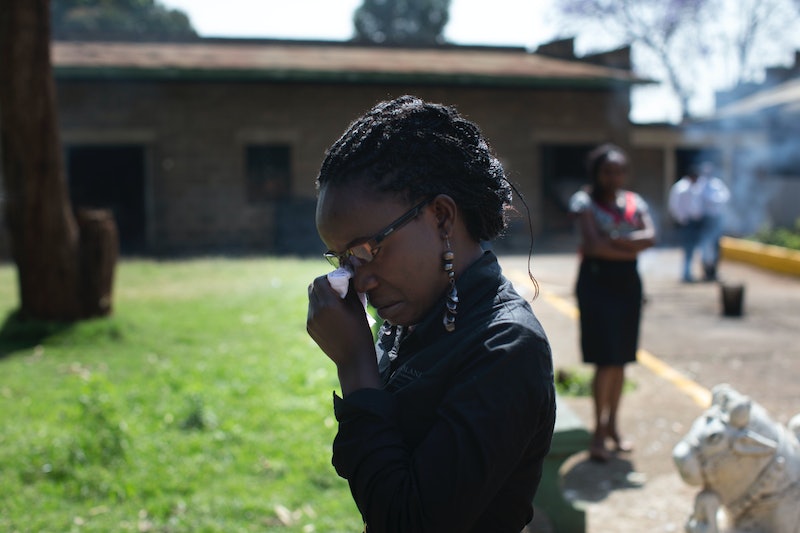 The 16-year-old girl known as Liz, who was brutally gang-raped by six men in Kenya this June and left to die in a latrine, might be seeing justice yet. Her story, first called in to the Kenyan Daily Nation by a doctor at a clinic Liz was admitted to, caught the attention of the Guardian four months later. Now her case is in the global spotlight, with a protest petition reaching one million signatures and counting, from just 1,600 signatures two weeks ago.

The pressure is on for Kenya's government to enforce the Sexual Offenses Act, a recent law passed in the country that promises to pay for the cost of Liz's treatment and surgeries and put her rapists in prison for a minimum of 15 years. First, however, the men have to be brought to trial. Initially, all six were identified by Liz, and officers promised her the men would be brought to justice. All six men were then ordered by officers to cut the grass in the police compound. Then, they all walked free.

The Daily Nation, which has tracked the story of the girl from the tip-off phone call through each step of her recovery and subsequent campaign for justice, announced on Friday that 190,000 people had signed a petition on the social media campaign site Avaaz. The petition, created by Kenyan activist Nebila Abdulmelik from the African Women’s Development Communication Network, calls for police action and justice for the girl in a country where rape often goes unpunished — where it is even normalized. As Bustle reported yesterday:

Unfortunately, rape is not uncommon in Kenya. Nor is it simply common —it is prolific. A woman there is raped every 30 seconds — that’s an estimated 120 an hour. Sixty-eight percent of girls are estimated to be victims of forceful sex. But it’s a crisis that, until now, the international community has not been talking about — because when violence is this commonplace, it often becomes normalized. (It speaks volumes, for instance, that this girl’s story took four months to reach the Guardian .)

The petition has now reached over a million signatures. The conversation on Twitter has also caused the story to go viral.

"Liz is not the first nor the last case but she has become our rallying call to ensure that impunity doesn't go unanswered," said activist Nebila Abdulmelik. "We want justice, and we want it now - for Liz and all others like her."

Abdulmelik's words echo the rhetoric of advocates of Daisy Coleman, one of two girls at the center of the Maryville rape case. A similar Twitter-handle campaign to raise awareness for that case's victims —#JusticeForLiz and #Justice4Daisy — have taken off. In Kenya, a country where 68 percent of women are estimated to be victims of forceful sex, there's now a #WeAreAllLiz hashtag to rally around.

While it would be wrong to suggest that these two rape cases exist in the same cultural context, there are certainly similarities in the way the two towns tried to shield the accused rapists. In both cases, members of the community apparently acted to protect the alleged rapists, and in both communities, the accused has yet to be charged.

"With this campaign, who could not care?" Avaaz campaign director Sam Barratt said. "Not only was the attack horrendous, but the lack of justice was clear. I think people look to see parallels of change elsewhere. There is a real power in echoes."

But rape is rape is rape. And sadly, whether it happens in Maryville or Kenya, it appears it has taken a massive social media outcry in order to even set justice into motion. And for Liz, or Daisy, or any woman — where's the justice in that?

More like this
Iran Has Issued A Death Sentence Over Mahsa Amini Protests
By Catharina Cheung, Darshita Goyal and Maxine Harrison
Read Dan Levy's Heartbreaking Message After The Club Q Shooting
By Stephanie Topacio Long
Amanda Gorman Shared A Powerful Message On Meghan Markle’s Penultimate Podcast
By Darshita Goyal
Joe Lycett Just Took HIs David Beckham Qatar Protest To A Whole New Level
By Sophie McEvoy
Get Even More From Bustle — Sign Up For The Newsletter