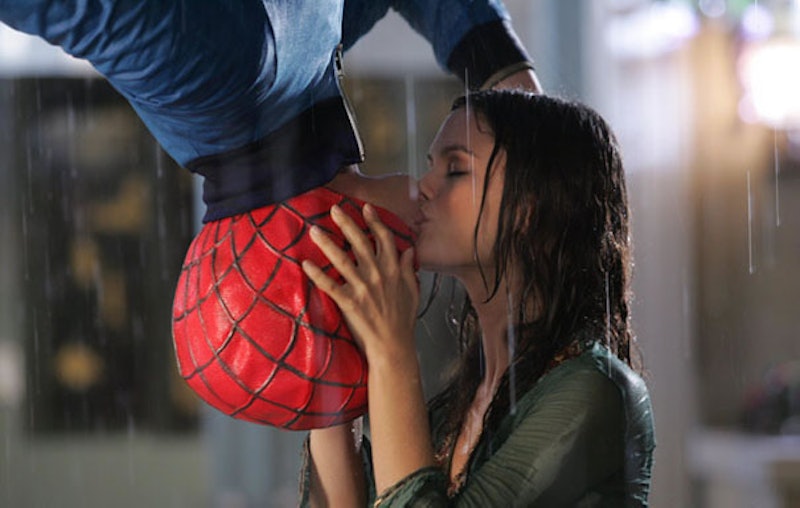 It's been long established that The O.C. is indie music paradise, sometimes thanks to the emo-listening mop-top that is Seth Cohen. In fact, there were certain songs that defined and elevated a particular O.C. moment, making it monumental. So let's celebrate some of the best musical moments of The O.C. with a little playlist of the songs that haven't left our minds all these years later.

How is that, you may ask? Well, the soundtrack wasn't just there to fulfill some injection of Top 40 melodies. It was put there to properly capture a mood, heighten a moment, create a memory. The soundtrack was built from contemporary rock that was very current at the time, which in turns gives the entire show a heartwarming nostalgic feel when you re-watch it these days. In short, it was built like a mix CD for the early '00s.

I'm know that The O.C. catalog isn't limited to just these moments, but I chose these amazing tunes so you have enough songs to burn onto a CD and party like it's 2004. Or take the emo route and just cry bitterly into your Discman. I don't judge.

This has to be here because it's an unforgettable tune to open a series with (or a mix CD, truth be told this is the first track on my "City of Angels" playlist). Although it's introduced as Ryan is pulling away from Chino, "California" is actually a homecoming song... one about the glorious and golden home that you never knew you could have.

So pure and innocent, like the virginity that was lost immediately after Summer Roberts tossed off her top. While drama-intensive Ryan and Marissa had their own melancholic love song (we'll get to that later) Seth and Summer's was better fit to their personalities, light and sugar sweet... almost comically so. It's also a great tune for hot girl slow-motion entrances.

Seth was so in love with Death Cab For Cutie that it pretty much made the band a separate character on the show. But things were upped to the next level when the band officially played at The Bait Shop... with Seth Cohen nowhere to be found. Still, it's such a giddy, teenage moment for all of us, the moment when your favorite band becomes a reality. Kind of. Unless you're not there.

The first of many covers, this one a Nada Surf facelift of a classic New Wave ballad. And it fits: in like the ending of every '80s teen movie, Seth stops Anna at the airport, telling her she doesn't have to leave for Pittsburgh because he's with Summer now. It's as adorable as it is obnoxious and presumptuous, and, even if you were team Seth and Summer all the way, the music makes Anna's send-off tug at your heart strings a little bit. Confidence, Cohen. Confidence, everyone who's reading this and has some devastating feels.

Marissa gets the New Year's Eve we all dream of, with Ryan swooping in dramatically for a midnight kiss. The world is suddenly all slow motion confetti and true love, a moment made eternally more swoon-worthy thanks to the dreamy song that is "Dice." Summer, by the way, has the New Year's Eve we all end up actually having. That is, kissing someone regrettable while the object of her affections is macking it with some chick with an overgrown pixie cut. I mean, whatever...

This later become best known as the iconic Veronica Mars theme song, but it was played for the lolz in an episode that had Summer and Anna band against Seth. The song plays multiple times throughout, but the best scene has Seth jamming out in polka dot boxers and a robe before waltzing into the kitchen to feign illness. Extra points because this is one of my favorite songs of all time.

"Fix You" is played to perfection in this memorable prom scene, one that has Summer crowed Queen while Ryan and Marissa slow dance outside. Oh, and Caleb dies, but that's whatever.

One thing The O.C. gets right about teenagers? They inexplicably love covers of Oasis. Two Seth and Summer moments are topped off with Oasis covers (the other one being "Wonderwall," what a shocker), but this one's particularly special. Summer breaks up with her sweet-but-boring boyfriend Zach, and rushes to Seth to recreate that vintage Spider-man kiss scene. It's a nerdy wet dream, in every way.

Oh girl, what can I say? Not only was it a heart-stopping scene that'll live on in teen soap history, but it's the song that spun a thousand parodies. My favorite is still the one where Jimmy from Degrassi (a.k.a. Drake) gets paralyzed, but that's just me.

A controversial pick, but I'm going to vouch for this one: "You Come In Burned" is the perfect background compliment to Marissa's fragile state of mind and vodka-swilling ways. And it likewise sets the tone for Marissa's intro to Oliver, The O.C.'s first (but not last) Marissa-obsessed psychopath.

True story: this particular cover was exclusively written for the show, and it serves as a powerful swan song for Ryan and Marissa's relationship. Ryan chooses to get with Nikki Wood, Marissa and Volchok start to form as a couple and, well, the show takes a turn, to say the least.

Not to be confused with the Truly Outrageous pink-haired cartoon songstress, this tune makes our hearts ache as Ryan and Marissa share what could be their last dance (spoiler: it isn't).

It's a cover that's so devastating when everything's crumbling apart in the first season finale. Ryan returning back to Chino to be a kinda-sorta baby-daddy, Marissa moving in with Caleb, Seth sailboating away from home. Add another cover of "Hallelujah" in the Season 3 finale (you know, when Marissa's dying and all), and you have a tune that will forever belong to The O.C.'s star-crossed lovers. Crying forever.