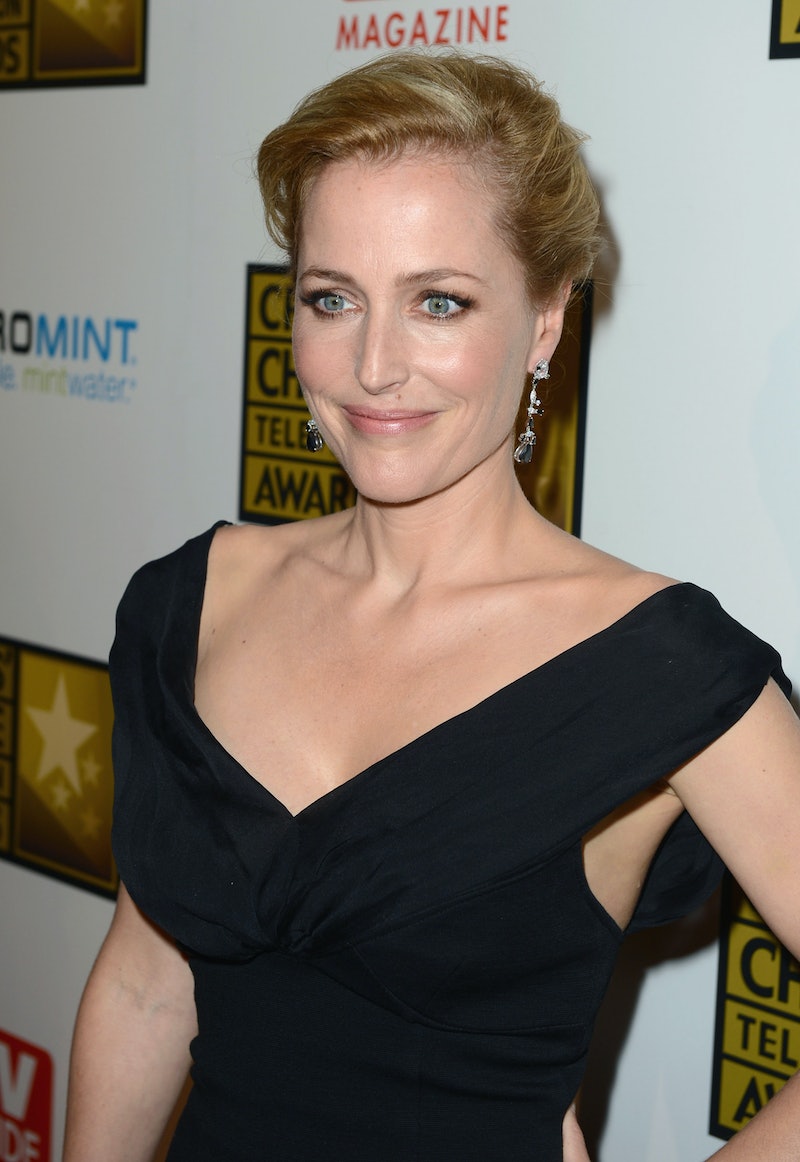 Gillian Anderson, how is it that you do what you do? Yours was a career of super-nerdery — The X-Files being at the top of that list. It should've been inevitable that you'd fall to the wayside like so many other '90s icons. But it's 2013 now, and here you are again with a successful return to stateside TV under your belt. Anderson's track record thus far has showcased a deft handle on the oft-terrifying ebbs and flows of an artistic career. Because of course she's handling this like a champion, she's Gillian motherfucking Anderson and she's not afraid to embody what it means to be herself. Which totally rules.

After years of being out of the spotlight stateside, these past 365 days have seen your graceful return in the zippiest way possible: by being a total boss TV bitch, totally owning your own career trajectory. And hoo boy, is it ever working. Anderson is tackling not one, not two, but three buzzed-about shows concurrently: the wonderful British series (co-starring the latest Christian Grey, Jamie Dornan) The Fall, as well as NBC's Hannibal and Crisis. Oh yeah and somewhere in there she managed to make a comedy film with Michael Caine because of course she did!

Gillian Anderson — you are doing everything right, and showing us all how a TV comeback is done.

The actress could've easily sold herself up the river to The X-Files fans: science fiction fandoms are nothing if not over-the-top intense with their everlasting love. Anderson could've simply hit the convention circuit, signing autographs and taking pictures while people creep-whispered into her ear "The truth is out there." (We're not saying it would've been glamorous, but it would've been an income.) But no! Not Anderson. She took some time off, to be sure, but mired herself into the British theater and BBC scene, no doubt giving people the distance and time away from Agent Dana Scully that they needed to move on. And, hey, getting nominated for a few BAFTAs never hurts the cred, either.

So now, Anderson has returned to her home on American TV screens — and doing so, she's being choosy with good reason. Surely there are tons of fanboys out there in the industry dying to get a chance to work with her. But Anderson is no slouch or shrinking violet. She demands a certain respect and only chooses projects based on her own predilections rather than money piles or some frantic need to be validated and attended to with fanfare. Which means: she calls the shots. And it rules.

How, then, does one get themselves into the sweet spot for optimum comeback success?

By Focusing on the Writing

Anderson's projects have been so well-received because they're just so gosh darn good. Always a plus when reigniting one's career. "[The Fall had] one of the best written scripts that I have encountered in a very long time. It's a very compelling story. The premise is that you see the serial killer at work at the same time as you see the investigative team start to hunt him down."

By Focusing on Quality and Taking Risks

For Anderson, that was found in Hannibal, the highly stylized and totally bloody crime drama that tells the tale of Will Graham of the Thomas Harris book series. "The quality of that show is very much along the lines of what I would want to be involved in — to the degree that it was almost taken off the air."

Anderson's strong suit has always been strong, capable women — certainly helped by her own strong-yet-understated confidence and poise. Speaking about her character Stella Gibson in The Fall (one of the most interesting and complicated female characters on TV in the last year): "She's a very interesting, elusive, enigmatic, capable woman" — a fact that drew her to the series. Anderson is also playing fancy international CEO Meg Fitch on NBC's Crisis — a show where her daughter is among the hostages — so we suppose it's easy to see where her sweet spot is in the acting world.

By Doing It All

I'm sorry, but do you know anyone else who's killing it on three highly stylized but also interestingly complex TV series like Hannibal, The Fall, and Crisis? No, of course you don't.

The X-Files fans were chomping at the bit for years to get Anderson and her co-star David Duchovny back together, even on non-sci-fi fare like Duchovny's Californication. But it never happened — thank goodness — because both actually care. When it was revealed that the actor did not want to see such a reunion take place on his Showtime series, Anderson explained that "it was about protecting the relationship and not wanting to sully it in any way. I understand that."

Most normals would probably look at her rundown of jobs this year and go 'eh, yeah, this is probably enough for now. I can pump the breaks, take the easy road for a minute.' But not Anderson. She knows it's about striking when the iron is hot (and you still have the leverage to make your own decisions). Which means exciting future prospects. "Something kind of exciting is happening now regarding a science fiction project," Anderson explained. "But it's too early to talk about!" Oh Gilly, of course it is. What: are you going to be the next Doctor Who after Peter Capaldi?

So, if you want to make a TV comeback, just be Gillian Anderson, basically.

More like this
Here’s Everything Coming To & Leaving Netflix In February
By Jake Viswanath
Pamela Anderson’s Dating & Marriage History Could Be Its Own TV Series
By Jake Viswanath
Keyla Monterroso Mejia Is Finally The Star Of The Show
By Gabrielle Bondi
This 'One Tree Hill' Wardrobe Error Is Going Viral On TikTok
By Brad Witter
Get Even More From Bustle — Sign Up For The Newsletter
From hair trends to relationship advice, our daily newsletter has everything you need to sound like a person who’s on TikTok, even if you aren’t.