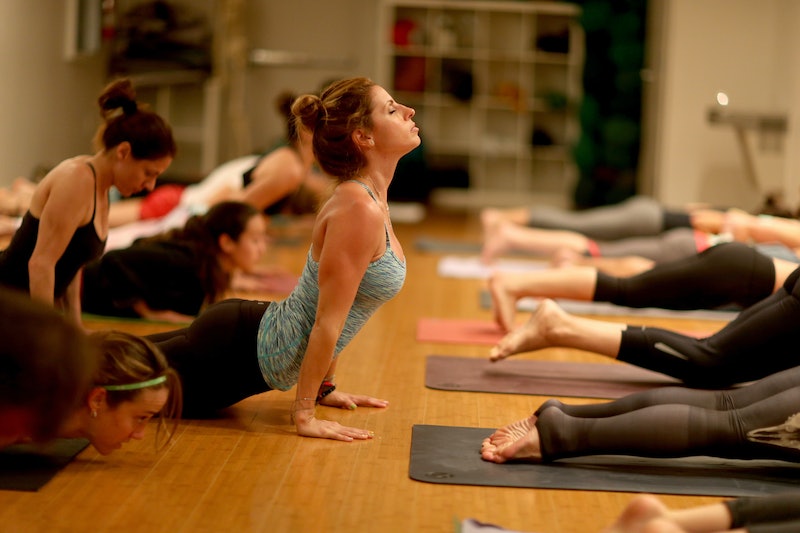 If you’ve been flirting with the idea of getting into yoga, then it might be time. I’m not saying this because I promote a healthy lifestyle or anything silly like that (I kid!), but because I’m an advocate for something else: Orgasms, and lots of them. And apparently yoga is inducing orgasms, “yogasms,” as they're called, in women left and right; in 20 percent of women, to be exact.

According to Kate Kendall, yoga guru and founder of Flow Athletic in Sydney, it’s all about the “positioning of the body in conjunction with movement and activation of the deep, pelvic floor muscles,” which makes perfect sense. Giving those particular muscles a workout by activating them is definitely going to give you some sort of flutter in there, even if you don’t reach total climax.

But it’s not just yogis who are enjoying orgasms while working out. A study by the University of Indiana says that 45 percent of women have experienced “coregasms,” from exercises that engage the abs, 26.5 percent have done so from weight lifting, 15.8 percent through cycling, 13.2 percent from running, and 9.6 percent from just walking. Yes, exercise, and all of it, is really good for every inch of your body even your pleasure zone.

Although orgasms from yoga aren’t a guarantee, because what in life is? A study published in The Journal of Sexual Medicine found that women who regularly practice yoga ― orgasm or not ― have more satisfying sex lives. As one yoga instructor put it, “It's a practice that requires you to be body aware and present, not dissimilar to love making.” I’m not sure I’d go that far, but it definitely can feel pretty damn awesome.

While I’m all for orgasms anywhere and everywhere, my only concern is how the hell does one remain discreet about it? I imagine climaxing while in yoga class or at the gym, even if you’re not the first one to do so, may make for a wee bit of awkwardness. But, hey, having an orgasm is better than not having one, so if it’s going to occur in front of your instructor and a class of 20, then so be it. I guess all you can do is smile and go with it.