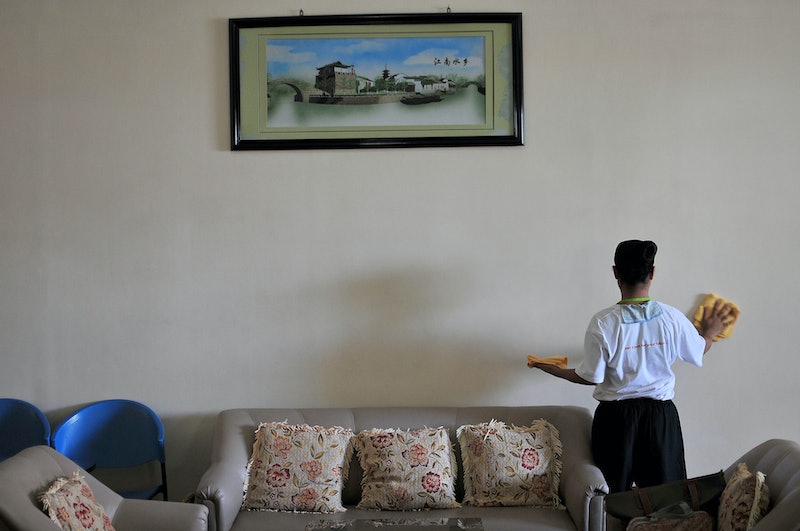 It's no secret that in the U.S., women typically handle more of the household chores than men do, even in cases when the women are working and the men are not. But in Germany, that may not be the case — or at least, not as couples get older. According to a new study published in the Journal of Marriage and Family, the housework gender gap narrows after retirement for a lot of couples in Germany. And that? Is slightly encouraging. It may not be much, but I'll take it.

The study, which was conducted by Thomas Leopald of the Unversity of Amsterdam and Jan Skopek of the European University Institute, revealed that, for heterosexual couples who followed traditional gender roles, men were more likely to pitch in around the house after they retired. This subsequently lightened the women's work load a bit — not to the extent that everything ended up totally equal, but enough that it suggests good things for the future.

It's worth noting that the sample size was rather particular; since all of the participants were from Germany, we can't really use the study to draw wide-reaching conclusions about other countries or cultures. But it is still worth looking at, especially for those of us in the Western world — because, well, if one country can do it, why can't all the others?

The researchers gathered their data from the German Socio-Economic Panel Study (which, you might recall, also served as the data set for that study about whether unemployment changes your personality). Specifically, they used responses from 1,388 German couples who participated in the study for at least three years; those three years could fall anywhere between 1985 and 2012. But the data set gets even more specific from there: The couples studied all stuck to traditional gender roles, with the husband working and the wife staying at home.

According to the study, the women reported spending about 6.8 hour a day on housework and chores — tasks like doing the laundry and dishes, running errands, and gardening — in the years before the men retired. While they working, men reported doing housework about two hours a day, or roughly 21 percent. After the men retired, though, men upped their daily chore contributions to 3.9 hours, while women handled slightly less — a little over six hours. This resulted in the men doing about 40 percent of the housework, and women doing about 60 percent of it.

As Melissa Dahl of Science of Us noted, the number of hours women spent on housework dropping from 6.8 to 6.1 might not seem like much — but, “it is something!” Obviously we still have a little ways to go, but the data suggests that things do start evening out a little when everyone's got more time on their hands. Interestingly, the U.S. actually ranked slightly better than Germany on the gender chore gap in 2014; in October of that year, the Wall Street Journal reported that, according to the Global Gender Gap Report, Germany scored a difference of 105 minutes spent on housework between men and women, while the U.S. scored one of 87.1 minutes. As such, I'd be interested to see whether the division of household labor in the States before and after retirement is similar or different to that in Germany.

Of course, what we don't know is how all this shakes out in households with two working partners, or in heterosexual households where the woman works and the man stays at home, or in households centered around relationship types that lie anywhere else on the spectrum. Those might be good angles for future studies to explore, though — so I don't know about you, but I'll be keeping my ear to the ground. The more we know about how we operate, the more we'll be able to make the changes we need to in order to achieve true equality.

More like this
TikTok Has A Genius Old School Hack For Saving Money
By Sophie McEvoy
How Ovulation Affects Your Sense Of Smell, Libido, & More
By JR Thorpe and Lexi Inks
An Expert Weighs In On The Viral Raw Carrot Salad Trend
By Alexis Morillo
The 3 Zodiac Signs Most Likely To Get Married Later In Life
By Kristine Fellizar
Get Even More From Bustle — Sign Up For The Newsletter
From hair trends to relationship advice, our daily newsletter has everything you need to sound like a person who’s on TikTok, even if you aren’t.