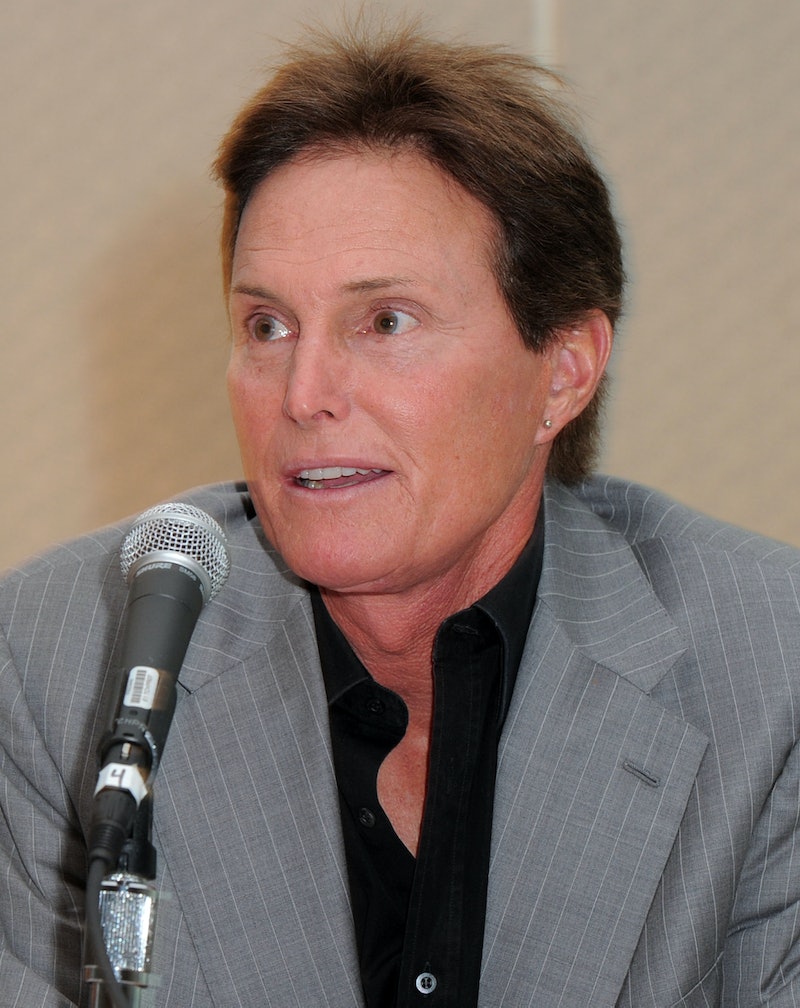 During a highly-anticipated interview with Diane Sawyer on 20/20 Friday, Bruce Jenner confirmed that he identifies as a woman, saying, "Yes, for all intents and purposes, I am a woman. People look at me differently. They see me as this macho male. But my heart and my soul and everything that I do in life, it is part of me. That female side is part of me. It is who I am."

It was milestone moment not only in Jenner's own life in the spotlight, but also in the way members of the transgender community are treated in the public eye: For the first time, Jenner was given the opportunity to tell his own story his way, in his own words, without tabloids interjecting vitriol, gossip, and misinterpretations. There is undoubtedly a lot left unsaid in the wake of this interview — and, of course, it is up to Jenner whether or not he ever wants to share more of his story — but the fact that Jenner spoke out at all about this deeply personal transition in his life is nothing short of brave. The interview and Jenner's admission, however, are only slight proof of the former Olympian's strength, bravery, and perseverance in the face of adversity: In the past, Jenner has given motivational speeches including deeply personal words and anecdotes that highlight just how strong he really is. And, in light of his interview — as well as to honor Jenner's decision to come out — they're worth a look back.

After he broke a world record at the 1976 Summer Olympics decathlon, Jenner began giving motivational speeches at numerous conventions, highlighting his own personal victories in an effort to inspire others to achieve what may feel like the impossible. As indicated in numerous quotes from his speeches, Jenner's main point was that anyone can get to where they want to be in life — as long as they put in the hard work it takes to get there.

Take this speech, for example. Jenner says right from the get-go:

I firmly believe that all of us — every person on this Earth — has a champion that lives down deep inside of them, that can come up with tremendous things to overcome tremendous obstacles — whether in the business life or in the personal life. Why do I believe that? I believe that because I've seen it in my life. And whether you're in the Olympic arena, or whether you're in the business arena, it makes no difference: It's still competition. So, your greatest competitor is not the other store down the street. Your greatest competition is yourself — to be able to come up with the performance to overcome the obstacles.

It's inspirational stuff, especially when applied to Jenner's current point in his life: Although it's without a doubt a difficult thing to share something as deeply personal as this — especially in the public eye — by sharing his story, Jenner is truly setting an amazing example for others who may be going through something similar in their own lives: He's proudly telling the world who he is on his own terms, in his own way. No one else — not the tabloids, not his reality show, not his family — is telling his story, and that's the way it should be.

The public is often unkind in the face of things like gender identity, sexual orientation, and other personal life choices, so having someone like Jenner — who was perceived as a bona fide, all-American hero for decades after the '76 Montreal Olympics — proudly proclaim that he is transgender to the world on his own terms is so important, and, hopefully, a step toward the media better understanding how to approach stories as personal as this one.

Additionally, as Biography points out, Jenner has been quoted saying, "I always felt that my greatest asset was not my physical ability, it was my mental ability." I think it's safe to say that in light of this interview — and how Jenner will move forward with his life in the public eye after it — that has never been more true.

Editors Note: Per Jenner's stated preference, Bustle will continue referring to Jenner using he/his pronouns for the time being. We will follow his lead and make any changes to this policy as needed in the future.

More like this
Jake Daniels Just Became The UK’s First Active Football Player To Come Out As Gay Since 1990
By Sam Ramsden
7 Exercises That'll Level Up Your Tennis Game
By Carolyn Steber
What Is Jeanie Buss' Net Worth? The Lakers President Is Uber Rich
By Hugh McIntyre
Sandra Bullock, Girlboss Extraordinaire
By Matt Harkins & Viviana Olen
Get Even More From Bustle — Sign Up For The Newsletter