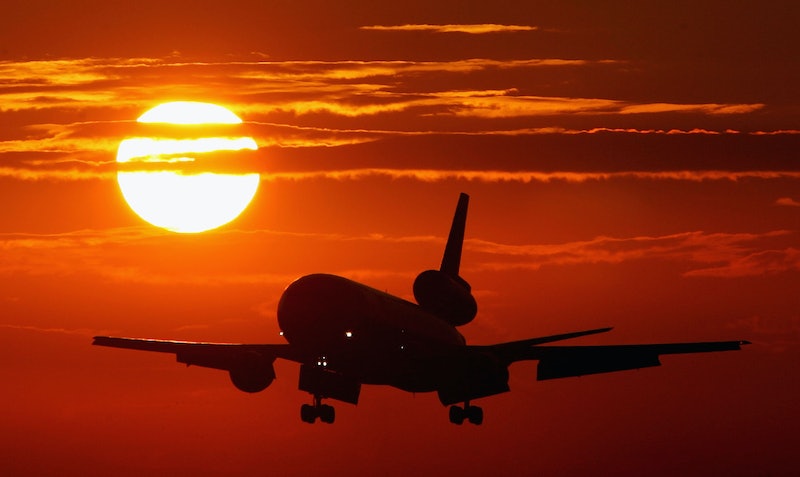 Many of us have experienced the crippling panic and fear that flying sometimes induces, but British Airways is suggesting a new sustainable, solid cure for this anxiety with its new in-flight mindfulness program. Contrary to more hardcore coping methods, such popping a Xanax with your vodka tonic (for the record, mixing antidepressants with alcohol is never a good idea) or more simply, large amounts of that vodka tonic alone, the meditation techniques BA wants to teach passengers are meant to provide a constant sense of security as well as a more positive outlook on the reality of flying and in life as a whole.

According to the National Institute of Mental Health, about 6.5 percent of people suffer from aviophobia, or a generalized fear of flying. This is despite the fact that we have a less than one out of 20,000 chance of being involved in an air catastrophe. But if you know flight fear, you know the statistics don't matter. There's something those pilot's aren't telling us!

Mindfulness is a consistently recurring topic, from yoga to meditation, as an increasing number of people and companies alike are catching onto the benefits that science has suggested it provides. Not only does it physically render your body less capable of creating the stress hormone cortisol, but it lowers the risk of depression among key groups and has been shown to provide practitioners a level of mental strength and clarity that allows them to complete major feats, like serious weight loss.

The plane, which will fly between San Francisco and London, has been especially designed for the mindfulness program is called A380, equipped with more spacious air cabins as well as an air conditioning system with 15 different cooling zones and a three-minute air cycle. Not only will meditation exercises be demonstrated throughout each flight but a series of videos focusing on techniques will be available, as well as a calming meditative playlist.

The service doesn't cease there, though, as the airbus is also providing a specialized meal plan option including vegan, low-calorie, and gluten-free options. So we are indeed looking at an ultra hip, trendy, healthful 11 hours. One might even say the plan borders on hipster tendencies, but given the pricey cost it's most likely that our lumbersexual mustachioed counterparts are skipping out on the airbus's designer AC system.

Regardless of the trendiness clearly associated with the new flight plan, British Airways might be on to something huge. The idea that we could retrain our minds to align any experience (flying, driving, a doctor's visit) with positivity holds massive potential and major ramifications. In the mean time, though, I'll stick with the time-honored flying tradition that consists of seasoned nuts and a few strong drinks. Because we all know that always ends well.

More like this
Craving The Beach? Here's Your Guide To A Solo Vacation In Turks & Caicos
By Alexis Morillo
Chelsea Clinton On The Best Advice She Ever Got From Her Mom
By Brianna Kovan
The 5 Best Laptop Power Banks
By Vanessa Spilios
This Psychological Effect Might Be Keeping You From Hitting Your Goals
By Lexi Inks
Get Even More From Bustle — Sign Up For The Newsletter