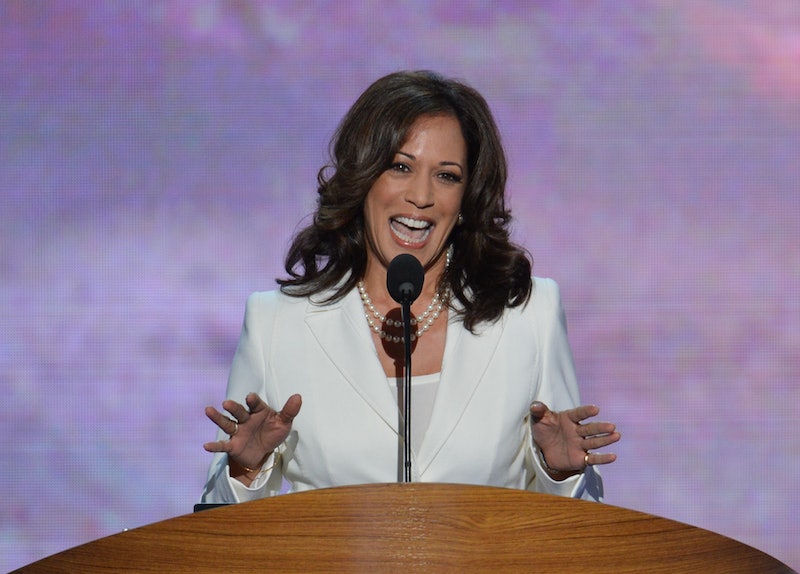 At the Women in the World Summit (WITW) in New York Thursday, Ashley Judd and Anita Sarkeesian spoke out about the endless online harassment they've endured on a panel titled "Stop the Trolls," describing times they feared for their lives and how their daily routines have been disrupted by online attacks. A fellow panelist, California Attorney General Kamala Harris, is trying to create a troll-free Internet, or at least prosecute people who threaten, harass, or exploit others online. Harris is leading California's fight to punish online harassment, laying the groundwork for reforms needed nationwide.

Under Harris' leadership, California recently convicted the operator of a "revenge porn" website and sentenced him to 18 years in state prison. The case was the first time an operator of a cyber-exploitation site has been criminally prosecuted in the U.S. and when Harris spoke about the case at WITW, she was beaming with pride. She explained that prosecuting cyber-exploitation (as Harris prefers to call it) faces the same problems as trying to prosecute for sexual violence. She said: "The obstacle is having a victim come forward because there is still so much about the issue of sex and sexuality in our society that when it’s raised in connection with a woman, it causes the victim herself and others to judge her and judge her on a moral standard."

When it comes to finding and prosecuting online trolls, like the ones that have been violently harassing and threatening Judd and Sarkeesian, the biggest obstacle can often be the police. Because law enforcement in many parts of the country aren't very tech-savvy, they don't understand the problem, much less what to do about it. Sarkeesian said at WITW:

I have definitely had to explain what Twitter is and how it works to law enforcement. I’ve had police tell me, “Well, why don’t you just stop doing what you’re doing if you’re being threatened?"

Harris is advocated for training police in how to use up-to-date technology and social media in order to help them fight online harassment. "If we don’t know what’s going on, we can’t help them," she said. "We can’t wait until people figure it out. We have to actually get in there."

Harris recently brought together 50 major Internet companies, including Twitter, Facebook, and Microsoft, along with law enforcement, to discuss the issues of online abuse and start to come up with an industry standard for how to deal with it. Currently, most social media sites don't have a clear protocol for how to handle trolls or instances of harassment. Harris said the discussion led law enforcement representatives to bring up temporary restraining orders, which people can get on short notice if another person poses an imminent threat. "Let's start thinking about how we'll use similar standards for this," Harris said at WITW.

The Californian attorney general is now running for Senate, hoping to replace Senator Barbara Boxer who announced her retirement in January. If she wins, that might mean that some of these cyber attack reforms could reach the national level.