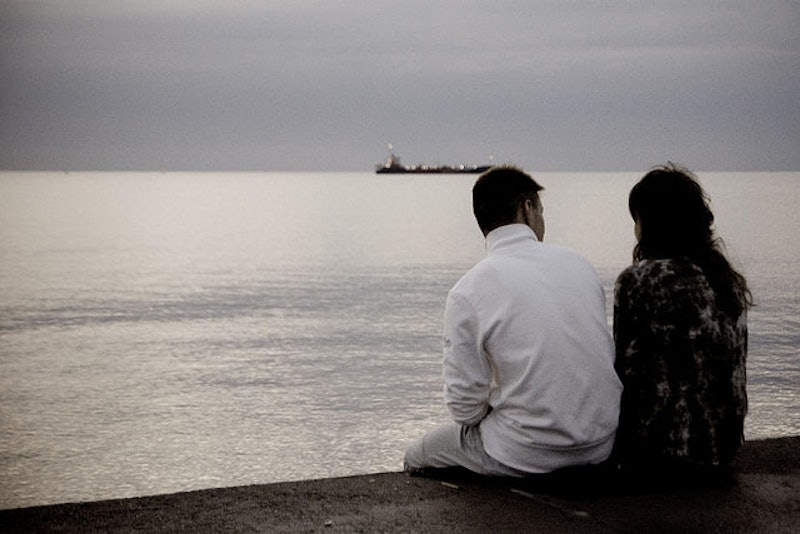 According to experts, there are many behaviors that can predict divorce. Some are completely obvious, like when the person you married slept with all your friends, then ran off with your sister. Then there are other things, like finances — which is statistically the number-one thing couples argue about. While both these and a plethora of other reasons make total sense in regard to why some people might call it quits, there are other, more absurd reasons people might opt for divorce… you know, like having a daughter.

While the myth is that more than half of couples divorce, according to recent studies, it's truthfully about one-third that will end up going down that road. Divorce, of course, is never easy, though sometimes unavoidable. I’ve always taken solace in the fact that sometimes, love just dies. In cases like that, no one is to blame.

Family law firm McKinley Irvin has looked into some of the more interesting things that have precipitated divorce. While they may seem a bit laughable at first, you probably won't be the one laughing when you’re on the other side, saying adieu simply because you live in the wrong state.

Here are some completely WTF things that predict whether you’re fated for divorce court or happily ever after.

1. Having An Online Affair

Although 54 percent of men do not consider this to be adultery, others apparently do. Keep in mind that “online” means exactly that — as in, there’s no physical sexing going on, just virtual.

Since the average cost of a wedding is currently $25,500, maybe we’re all headed for divorce. Think about it this way: If you blow all your money before you even enter into your marriage, then you're immediately setting yourself back financially.

3. Living In A Red State

Although the exact reason for this is currently unknown (and I’ll refrain from making assumptions based on my liberal bias), it apparently holds true. The states with the highest divorce rate are Oklahoma, Arkansas, and Alaska.

4. Not Going To College

Those with only a high school education are more likely to split than those who went to college or on to even higher education. The theory behind this is that the more educated you are, the more financially secure you tend to be, so you get to avoid a lot of arguments about money issues.

5. Having A Commute Longer Than 45 Minutes

If you have a commute to and from work that’s 45 minutes or longer, then that’s not a good sign.

A 2013 study found that 14 percent of those with such commutes ended up choosing divorce, because it was just too much stress for partners to bear. If you come home cranky, it doesn’t make for marital bliss.

A 2010 study found that boys make families want to stick together, even through the rocky times, whereas if things become trying and there's a daughter involved, moms are more likely to leave. Women tend to want to set a good example for their daughters, so they're less willing to put up with bullshit. Well, once you put it that way, it sounds like a good thing.

7. Rolling Your Eyes At Your Partner

Well, of course. I don't even think we need a study to prove this. However, some people do deserve it. Let's be honest.

8. Using Social Media Too Much

Between trying to find old flings, flirting with the guy you had a crush on in college, and noticing just how often your partner likes the photos of one particular person, can we even be surprised? More than a few studies in the last few years have blamed Facebook for divorce, with a 2012 study of divorce lawyers in the United Kingdom saying it contributed to the one-third of their cases.

9. Marrying Someone Either Way Older Or Way Younger

While there are couples who can handle an age gap, the reality is that sometimes it's too much. Studies have found that the closer someone is in age to you, the less likely you are to divorce. The further you go past a five-year age gap, the greater the chances of divorce.

10. Not Being Equal In Household Duties

Although this would not have have been a contributing factor back in Don Draper's era, who can blame a couple for divorcing over such a thing? However, I would like to point out that, McKinley Irvin aside, a study found that people divorce when they do share the chores... but that was in Norway, so maybe it's different there.

More like this
The Top Mistakes Scorpios Make In Relationships (& How To Avoid Them)
By Nina Kahn
How To Do The Intimacy-Boosting Lotus Sex Position
By Laken Howard and Lexi Inks
What Is The Forest Personality Test? The TikTok Trend, Explained
By Georgina Lawton
Are Leo & Capricorn A Good Match?
By Kristine Fellizar
Get Even More From Bustle — Sign Up For The Newsletter