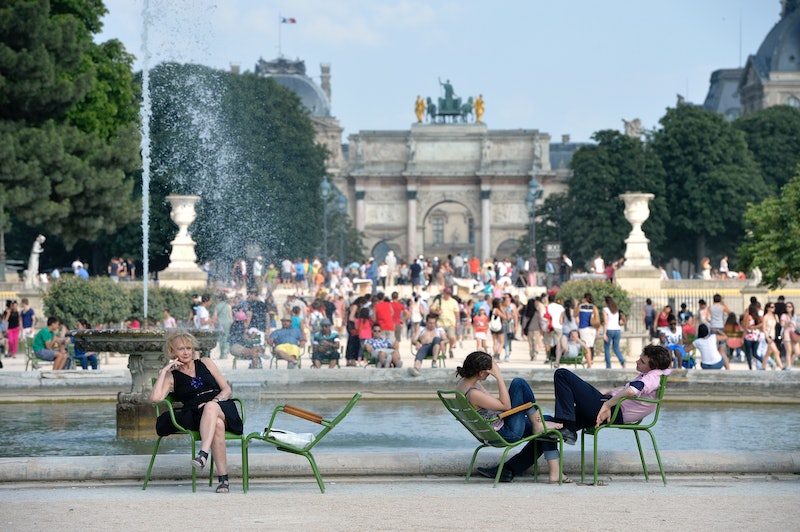 The city of Paris has inspired countless movies and books, which have, in turn, sparked dreams among countless Americans to run away to France and experience Paris like a Parisian. Julian Green described Paris as, "a city of staircases that challenge the imagination." While most of us are content with wistfully watching these movies and reading these books and scrolling through pictures of the Eiffel Tower on Instagram, Kate Betts wanted to actually live out her Paris dream.

After graduating from Princeton University, the fourth member of her family to do so, Betts wanted to "to get as far away as possible, not just from my unhappy parents but from the expectations the legacy conferred on me." Paris was the place to go, of course, and although she couldn't explain what she would find there, "I knew Paris would give me something I couldn't find anywhere else." Betts made it her mission to soak up as much as she could about French culture and language and style while she was there, and after five years of living and working and dating in Paris, Betts certainly learned how to navigate through the city as a Parisian. It wasn't without its difficulties, though.

My Paris Dream: An Education in Style, Slang, and Seduction in the Great City on the Seine by Kate Betts, $13, Amazon

My Paris Dream: An Education in Style, Slang, and Seduction in the Great City on the Seine is the story of what Betts learned from her five years of living in Paris, from her first day as an unemployed, recent college graduate looking for her first gig, through her rise through the ranks of the tony fashion magazine Women's Wear Daily, and eventual return to New York City. For those of us hoping to live out our Parisian dream, here are nine lessons about fitting in in one of the world's most romantic cities — some of which Betts learned in the most unromantic ways possible.

Discover The Culture Through The Details...

As a reporter and eventually editor for Women's Wear Daily, Betts was encouraged to, "chart the social structures of the French through the exterior presentation... what Baudelaire called 'the daily metamorphosis of exterior things.'" Examining French culture through these physical things, from structures and street plans to skirts and shoes, is the easiest way to start learning about it, so start your journey by noticing those details.

...And Start With Food

"Food was an easy way to learn about French tradition, to feel like I belonged," writes Betts. In fact, one of Betts's first memories of Paris is the "intense flavor of the side-by-side scoops of raspberry and lemon-lime sorbet" from Berthillon, a famous ice cream shop on the Île Saint-Louis. It seems that almost every memory comes with food, from langoustines in Brittany with her French boyfriend and his family to flourless chocolate cake made by her friend on Betts's last night in Paris. According to Betts, you know you're a Parisian when the fishmonger and the baker know you by sight, so don't go ahead and eat well. (If you can't make it to a Parisian bistro, don't worry. Betts also includes some recipes in My Paris Dream for the reader to try at home.)

It's Not All About Your Job

Betts threw herself into her career as a journalist, and was quickly promoted from reporter to fashion editor at WWD. At the time, she thought it was her connections to French culture and "Parisian savvy" that garnered her the promotion. "But the more likely reason," she admits, "was that I was willing to work until midnight five days a week." This is an entirely un-Parisian approach to work. Betts would be scolded by French friends for talking about her job at social gatherings, and regularly encouraged to "Seize the moment ... Pay attention to your life right now." Working hard is fine, but remember to pay attention to the people and the city around you. And maybe avoid talking about your job too much.

Be True To Your Style

Two of Betts's Parisian friends, Domitille and Christel, believed, "appearance wasn't so much a fashion statement as part of their regimen. It was almost like table manners to them... Taste was not a choice; it was their way of life." Parisians have a uniform for everything, from the workplace to a wedding, and French women seem to intuitively know how to dress. Keep an eye out for those trends, but make sure you know what works for you. As Betts learned from her fashionable friends, "If you don't have taste — or if you are not true to yourself in your style — you are clueless or, even worse, low class." Make sure you're honest to your own style, too.

Betts learned about Paris by writing about the city and its people through the lens of a fashion reporter. Meanwhile, her friend Nikki, an Australian who worked at Polo Ralph Lauren, who went to clubs with older men and polo players, "reaching for a life of glamour and extravagance." Betts's godmother, another New Yorker living in Paris, hosted dinner parties at her apartment for other American friends and loved the expat lifestyle, and never fully grasped the French language. There's no one, singular way to learn about France and French culture, so don't stress about trying to do it the "right" way.

Unlike the United States, where cultural traditions can feel stuffy or overbearing, French traditions are woven into the fabric of everyday life. "The French breathed so much vitality into their traditions," explains Betts. "They lived in the past as easily as the present." And some of the traditions are things we should totally import, like the sacred Sunday ritual of la grasse matinée, or sleeping in, followed by church and a big meal with family. Learn to savor these little moments, and appreciate the bits of history that still appear in daily French life.

...But Remember Your Roots

Betts's years in Paris were not without homesickness and heartbreak. "There is no word in French for loneliness," she reminds the reader. Betts might have dressed like a Parisian, but after leaving and coming back, her "energy was now distinctly that of a New Yorker — high on adrenaline and low on patience." Parisians would still pick her out as being "so American," even if no one could articulate what tipped them off. In much the same way there are French traditions and values that are instilled from birth, there are certain traits from your own culture that will also stick with you as you learn about a new one.

Fitting In Is Not Belonging

After living in Paris for three years, Betts had learned many of the signifiers of a true Parisian. She could speak French like a truck driver, and had the BCBG (an abbreviation for bon chic, bon genre) look down, rocking a mini-skirt and turtleneck and the right kind of tights. But there were still some gestures she just couldn't get. "You can have the ingredients and still never master the recipe," Betts writes, and understanding the different between truly belonging to a culture and just fitting in is an important step in being comfortable in any foreign city.

Just Get On A Plane And Go

The advice Betts's mother gave before she went to Paris was, "You can always come back... Just go." Her father gave her similar encouragement while she was there: "Five thousand miles is nothing; doing what you enjoy is everything." If you want to go live out your own Paris dream, the best thing you can do is just go. Betts did, and even if it wasn't always easy, she made it work. You can too. You just have to get to Paris first.

More like this
10 Must-Read Books Out This Week
By K.W. Colyard
13 Summer Solstice Quotes To Celebrate The Longest Day Of The Year
By Sadie Trombetta
16 Novels That Paint A Realistic Portrait Of Abortion
By K.W. Colyard
How To Fight For Reproductive Rights, Based On How Much Time You Have
By Courtney Young
Get Even More From Bustle — Sign Up For The Newsletter