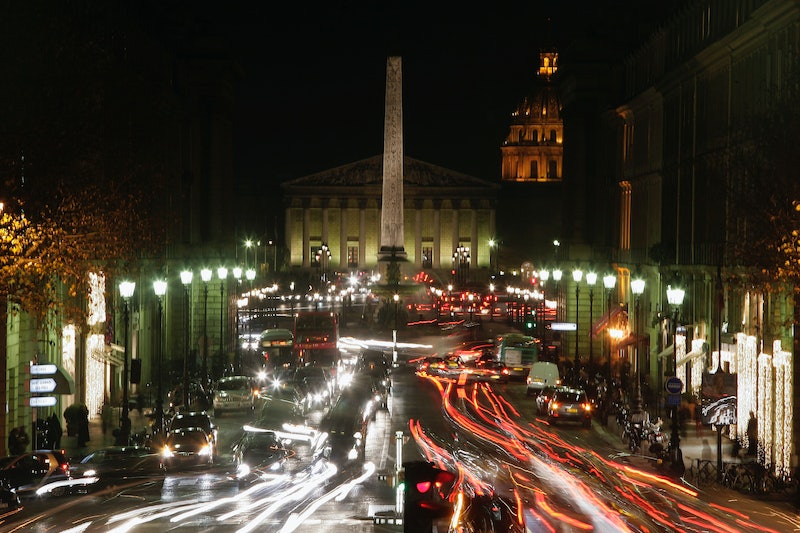 Gertrude Stein said, “Paris was where the 20th century was.” With writers including Hemmingway, Joyce, Anaïs Nin, and more all scribbling in bars on the left bank, it’s hard to disagree. In the here and now, we’re still in love with the myth those artists created: the romance, the mystery, the hustle and bustle of an international community against an unmistakably Parisian backdrop of bistros and boulevards. (Pause here for swoon.) While writers don’t always agree on the essence of the city — for Nin it’s erotic, for White it’s melancholy, for Rilke it’s vital, for Eugenides it’s infused with nostalgia — drawn together, their words, below, create a patchwork love letter to the city of lights. Apologies if they make you want to pack your bags; we're not paying for your plane ticket.

Paris where everything has a different tone and gets lost in the immense din which sets things trembling.

“It’s not so beautiful, you know. Of course, it is beautiful…But it’s the life of Paris; that’s the thing. Ah, there’s no city like Paris for gaiety, movement, excitement…”

“Everything in Paris is gay,” said Ignatius Gallaher. “They believe in enjoying life — and don’t you think they’re right? If you want to enjoy yourself properly you must go to Paris. […].” Little Chandler took four or five sips from his glass.

“Tell me,” he said, “is it true that Paris is so…immoral as they say?”

Ignatius Gallaher made a Catholic gesture with his right arm.

“Every place is immoral,” he said.

I don’t know what there is about Paris, but there is a sensuality in the air there. It is contagious. It is such a human city. I don’t know whether it is because couples are always kissing in the streets, at tables in the cafés, in the movies, in the parks. They embrace each other so freely. They stop for long complete kisses in the middle of the sidewalk, at the subway entrances. Perhaps it is that, or the softness of the air. I don’t know. In the dark, in each doorway at night there is a man and a woman almost melted into one another. […] At five o’clock in the afternoon it becomes unbearable. There is love and desire in the air. Everybody is in the streets. The cafés are full. It is all so open, so easy.

Imagine dying and being grateful you’d gone to heaven, until one day (or one century) it dawned on you that your main mood was melancholy, although you were constantly convinced that happiness lay just around the next corner. That’s something like living in Paris for years, even decades. It’s a mild hell so comfortable that it resembles heaven.

Paris is a city of staircases that challenge the imagination. I am not thinking of the old mansions, whose proud flights are like elegant speeches in which each landing marks a pause between periods; I have in mind those bourgeois staircases so replete with intrigues, quarrels, and ulterior motives that a novelist cannot even grasp the bannister without some character whispering in his ear and granting him a glimpse of a face.

The troubadour was playing a Neil Young song, reproducing the lyrics down to their last twang and whine without knowing what they meant. Older, better-dressed people were promenading by toward the floodlit buildings on the other bank. Paris was a museum displaying exactly itself.

[T]he limitless Paris adored by collectors, this city which invites you to make collections of everything, because it accumulates and classifies and redistributes, where you can search as in an archaeological excavation.